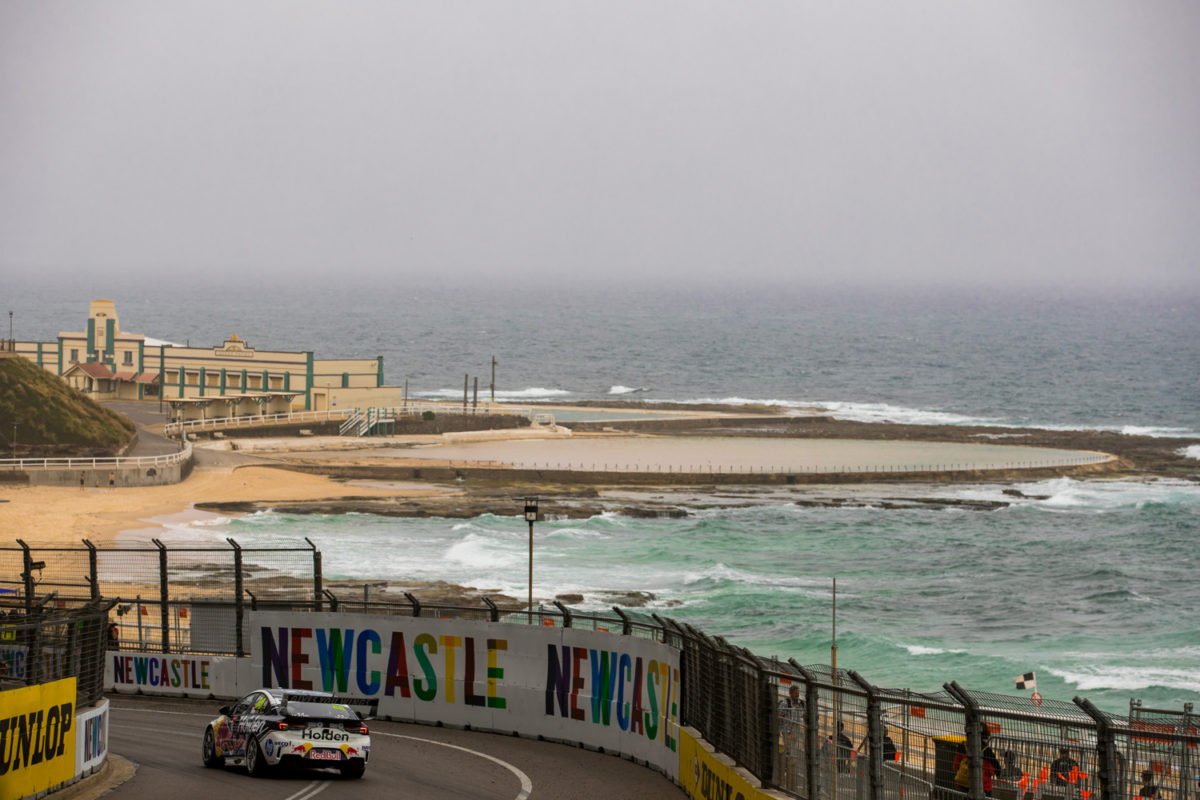 Jame Whincup says Newcastle in wet will be ‘gnarly’

Jamie Whincup predicts the Coates Hire Newcastle 500 will turn ‘gnarly’ should forecasted rain for the remainder of the weekend arrive.

The Red Bull Holden Racing Team driver was fastest in Friday’s running, which saw winds of 40 km/h buffet cars, with a number forced up the escape roads.

Thunderstorms hit Newcastle on Friday night, with further rain forecast throughout Saturday, ramping up into the afternoon and evening, which could develop into further storms.

It’s left Whincup torn at the prospect of racing in the wet, the seven-time champion dreading the prospect of careering around the Newcastle streets in the rain though conceding it’s much needed after fires have ravaged the north east of New South Wales.

“It’s going to be a gnarly place in the wet,” Whincup said.

“I’m a little bit torn on the weather, of course we don’t want rain for racing, but man, the community needs some rain around here to put out the bush fires.

“Hopefully it buckets down Saturday night and it just dries out for the race (on Sunday).”

The rain is expected to ease during the morning on Sunday, but forecasts still predict a more than 20 percent chance of rain come race time on Sunday.

In its third year on the Supercars calendar, there has been no wet running at Newcastle.

“We did the track walk, and there’s a lot of white lines that are now painted black,” said Whincup.

“I think they’re going to be just as slippery as what the white lines would have been.”

Since last year the circuit has undergone minor changes, with the Turn 11 hairpin having been reprofiled in an effort to encourage further overtaking.

It’s a move in the right direction according to Whincup, and team-mate Shane van Gisbergen.

“The new hairpin which will hopefully make the racing better, but yeah, it’s always a good track, awesome to drive and when you put a lap together here it’s a pretty cool feeling.”

“There’s the extra length from the kink to the hairpin, that’s a plus,” Whincup suggested.

“The corner is actually is a lot slower now because the radius is tighter; those two things combined could open up an opportunity.

“It’s still a bit of a desperado to fire down the inside there, but there’s plenty of them out there for sure.”

Supercars returns to track for Qualifying at 1050 AEDT on Saturday morning, ahead of an Armor All Top 10 Shootout and the penultimate race of the season.