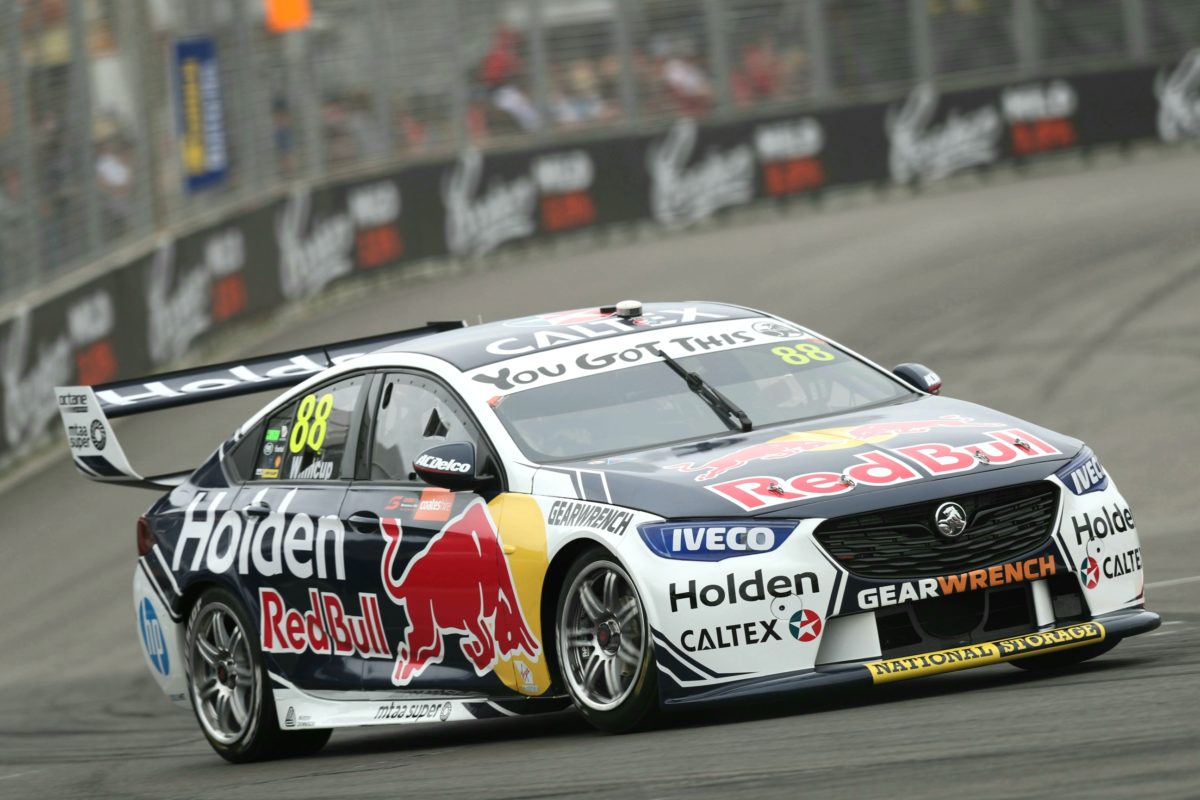 Jamie Whincup has qualified on provisional pole for Race 31 in Newcastle while Triple Eight team-mate Shane van Gisbergen barely rescued a place in the Armor All Top 10 Shootout.

In the end, both Red Bull Holden Racing Team entries, Shell V-Power Racing Team duo Fabian Coulthard and Scott McLaughlin, and both Penrite Racing cars made the top 10 in a session run under grey skies.

While Whincup did not bother with a fourth run in the 20-minute hit-out, McLaughlin looked to be having a relative struggle before it appeared van Gisbergen was going to miss out on the Shootout.

The latter was 12th and slower to his best second sector split with the chequered flag out but managed to pull out a 1:10.5342s in the #97 Red Bull HRT ZB Commodore, which put him 10th and edged Mark Winterbottom out by 0.0448s.

Scott Pye (Mobil 1 Racing) caused a red flag which effectively ended the second runs when he locked up and crashed the #2 ZB Commodore into the outside tyre bundle at the left-hander off Newcastle Beach.

By then, Anton De Pasquale (#99 Penrite ZB Commodore) had taken over the ascendancy with a 1:10.4333s, Tim Slade (#14 Freightliner ZB Commodore) had moved to second, and Courtney was third having improved such that he was just 0.0263s off the pace.

Van Gisbergen was eighth at that point with a lap achieved on a Friday set of tyres, but McLaughlin was only ninth having started the session on green tyres and taken another new set for his next run.

Coulthard (#12 Mustang) moved himself into the middle of the top 10 after the red flag, moments before Holdsworth consolidated his hold on a berth in the one-lap dash.

McLaughlin then moved from 10th to sixth and Whincup from eight to first with a 1:10.1823s.

The latter parked the #88 ZB Commodore and Slade also remained in the pits thereafter, but McLaughlin was given yet another set of new tyres for his fourth and final run.

Cameron Waters (#6 Monster Energy Mustang) got as high as second position from 11th with a lap which bumped van Gisbergen out of the Shootout at that point.

Holdsworth improved again before the chequered flag, and each of McLaughlin and Coulthard afterwards.

De Pasquale subsequently moved from fifth to second, where he would remain, with a 1:10.3093s.

Whincup said, “It’s so difficult to get a real clean… I don’t reckon anyone maximised then, that just shows how difficult the track is.”

Van Gisbergen pulled it out of the fire and will be first on-track in the Shootout, while Winterbottom (#18 Irwin Tools ZB Commodore) is locked into 11th and Rick Kelly (#15 Castrol Altima) alongside him on Row 6.

“My car is awesome on the old tyres (but) all practice, put a new tyre on and we go slower,” explained van Gisbergen.

“Lacking something, which means it’s a good race car but it’s hard to pass around here. We need to get qualifying better and then keep our race pace.

Chaz Mostert (#55 Supercheap Auto Mustang) was only 16th and Pye brought up the rear of the field having lost his fastest lap for causing the red flag.

The Armor All Top 10 Shootout for Race 31 of the Virgin Australia Supercars Championship at the Coates Hire Newcastle 500 starts at 1315 local time/AEDT.

Results: Armor All Qualifying for Race 31