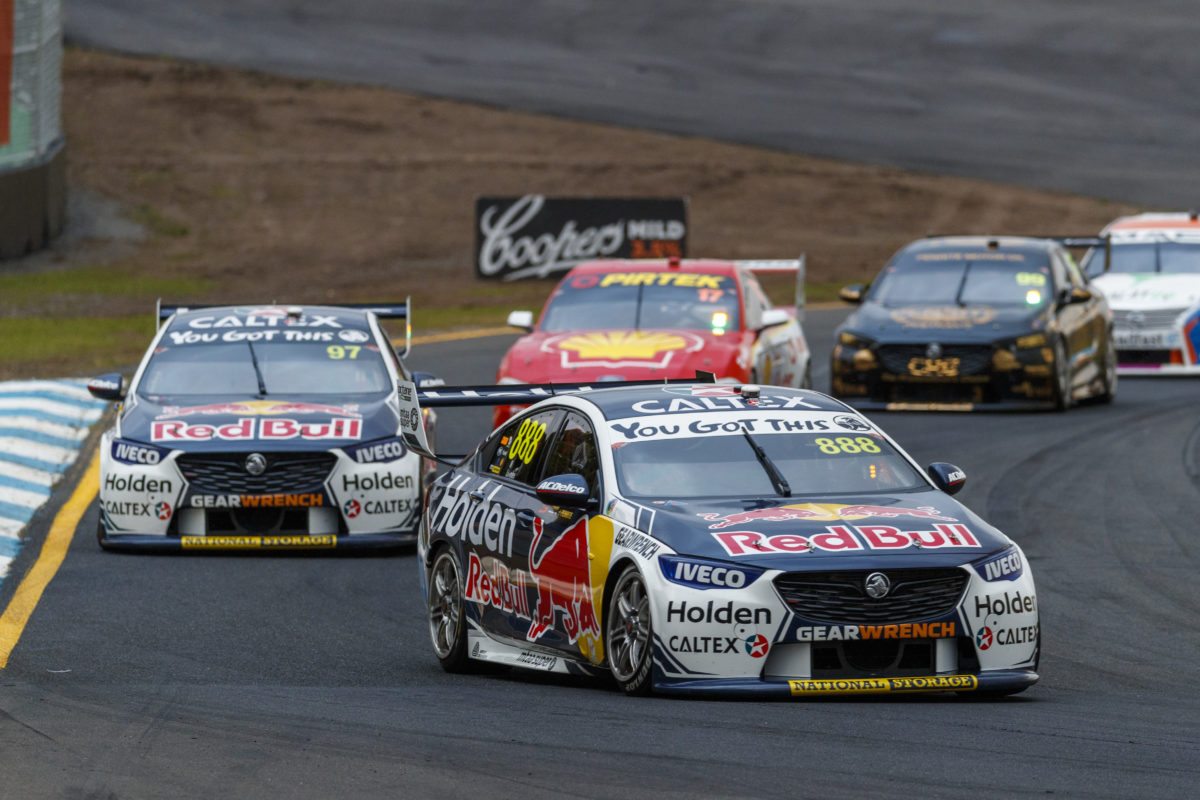 Triple Eight is gunning for this year’s teams’ title

Securing the Supercars teams’ title, thought to be unattainable earlier this year, is Triple Eight’s main focus at this weekend’s Coates Hire Newcastle 500.

The factory Holden squad is only 116 points behind Shell V-Power Racing heading into this weekend’s season finale with the teams’ crown the only title up for grabs now Scott McLaughlin has claimed a second Supercars drivers’ championship.

Triple Eight had thought the teams’ title would be out of reach this season having faced an 867 point deficit to the Ford squad at The Bend Motorsport Park in August.

Aided by ongoing developments and a parity adjustment, Triple Eight has enjoyed a strong run-in with one of its cars finishing either first or second in all races since Pukekohe when the Holden aero package was updated.

The run has included a maximum points haul from the Gold Coast 600 courtesy of two one-two finishes and wins at Pukekohe and the Sandown 500 last time out.

Coupled with the success, Triple Eight’s title push has been aided by DJR Team Penske after the outfit lost a total of 420 points as part of the sanctions for a breach of the FIA International Sporting Code at the Supercheap Auto Bathurst 1000.

Triple Eight team manager Mark Dutton says his squad is fully focused on securing the teams’ title this weekend, when 576 points are up for grabs.

“We’re definitely very, very keen to try and secure that one. It’s the main focus for the weekend, 100 percent,” Dutton told Speedcafe.com.

“Everyone’s just going on with the business making sure the cars are prepared properly. That’s the last thing we need, is any mechanical failures or issues. That’s the focus.

“We just had our strategy meeting so yeah, looking at different options there, for all the different scenarios. Now, you’ve got to go through qualifying and see what you qualify before you lock anything away

“With obviously the amount of points Scotty (McLaughlin) was scoring and at the rate he was, with the team cars, you’re thinking, if they were both up there the whole year, then it’d be totally unattainable.

“But obviously, there’s been some water under the bridge and some things happen.

“We’ve just focused on our own game and also trying to make sure that and some issues with the difference between manufacturers were sorted out, so that every Holden was in there with a fighting chance, ourselves included.

“(We) didn’t expect to be in a position to be fighting for it. But you always work towards it as if you are going to be in that position, so you never drop the head and give up, that’s for sure.”

Dutton says winning the teams’ title, which Triple Eight has done nine times including last year, is an honour for the team although the prize of being first in the pit lane is valuable from a tactical sense next year.

“I mean it is a representation of the work that the team has done, but the first in pit lane is so important for strategic things,” Dutton added.

“You’re first out, as we’ve said lots of times, for qualifying for practice.

“You don’t have to worry about anyone cutting your nose in pit stops and diving in front of you, so, it makes the car controller’s job a little bit easier.

“It’s a very difficult job being a car controller. So, if you can make that easier for them, then that’s fantastic.

“Our team have done a cracker job, but we don’t need that (title) to be able to be proud of our achievements for the year.”

Highlighting the need to avoid mechanical dramas, the team has put in measures to prevent a repeat of the suspension issue that cost Shane van Gisbergen and Garth Tander a likely victory at Sandown.

“We’ll go to Newcastle and we’ll increase the torque on the bolts a bit,” Dutton added.

“We’ll put locking washers as well as the locking nuts as well.

“We’ll go the full over the top belts and braces, but that’s just to be sure we’re covering off for that one and we will monitor it and see what the go is moving forward.”

The Newcastle 500 begins on Friday with opening practice scheduled for 1130 local time/AEDT.