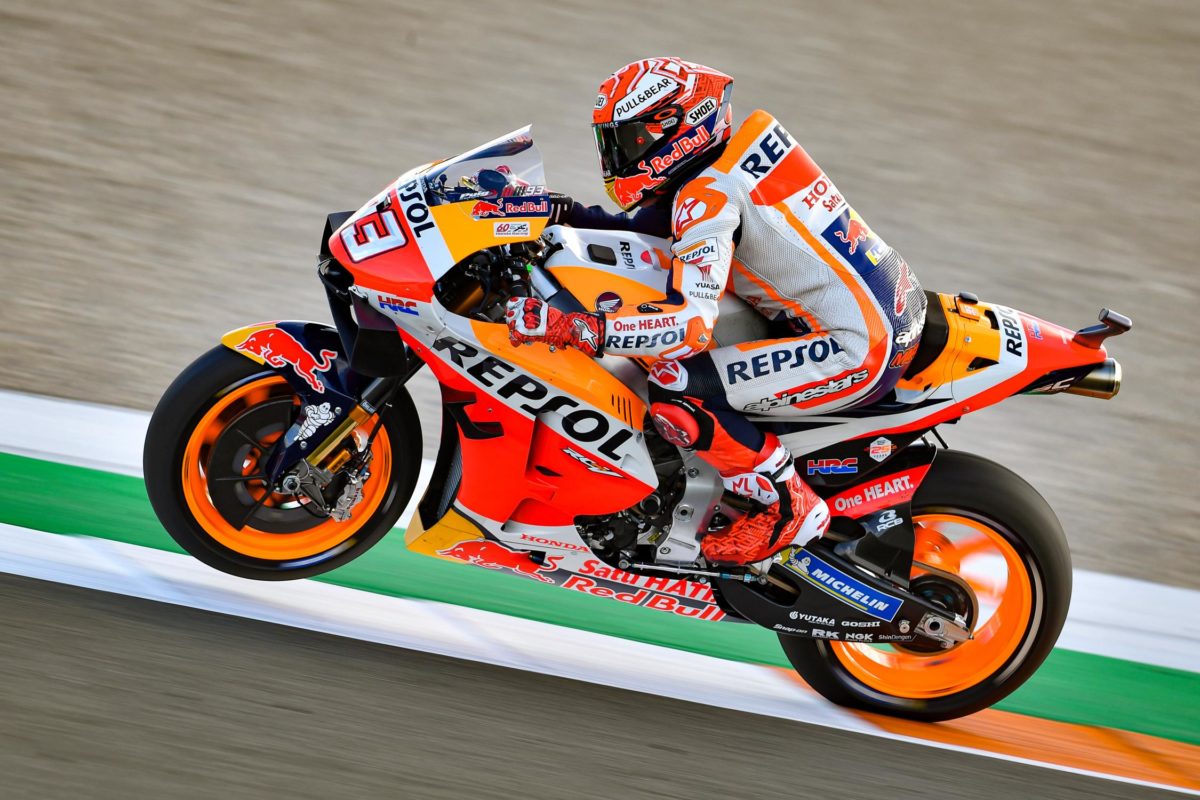 World champion Marc Marquez completed another dominant season by taking his 12th win of the MotoGP campaign from Fabio Quartararo and Jack Miller at the Valencia finale.

The Repsol Honda rider once again proved unstoppable as the Spaniard helped secure the teams’ title to complete an impressive season, which has seen Marquez score a record points tally.

However, the early stages of the race quickly developed into a duel between Marquez and Quartararo, but it was the former who prevailed before cruising to victory.

Quartararo finished a comfortable second, while Miller ended the season with a credible third, his fifth podium of the season.

It was the fast starting Miller that got the holeshot and led the field into Turn 1 but was immediately under pressure from Quartararo.

By Turn 2 Quartararo had found a way by the Pramac Ducati to take the lead while Marquez stalked the pair in third at the end of the opening lap.

Marquez soon set his sights on Miller, passing the Australian at the final corner on the second lap.

At the front, Quartararo and Marquez began to break away from Miller in third as the battle for the lead intensified.

Marquez ramped up the pressure on Quartararo, who had opened up a half a second lead in the opening laps.

The pressure eventually took its toll as the six-time premier class world champion swept into the lead with a move on Quartararo at Turn 11 on Lap 8.

Once ahead, he wasted little time and quickly established a healthy gap as Quartararo began to fall into the clutches of Miller.

Petrucci was the first to fall and slide into the gravel trap before being joined seconds later by Zarco and 15th placed Lecuona in separate incidents.

Bizarrely after losing the front of his bike Zarco climbed to his feet in the gravel trap and began to walk to from the incident only to be cleaned off his feet by Lecuona’s errant bike.

Zarco was stretchered away from the corner and taken to the circuit’s medical centre before returning to his pit garage.

As Marquez continued to surge towards another win, there was plenty of action behind as Franco Morbidelli (Petronas Yamaha SRT) crashed out of sixth at Turn 4.

As the laps ticked by there was no stopping Marquez, who went on to complete a stunning season with yet another victory, as Quartararo took second.

Miller came home a comfortable third ahead of Dovizioso and Rins.