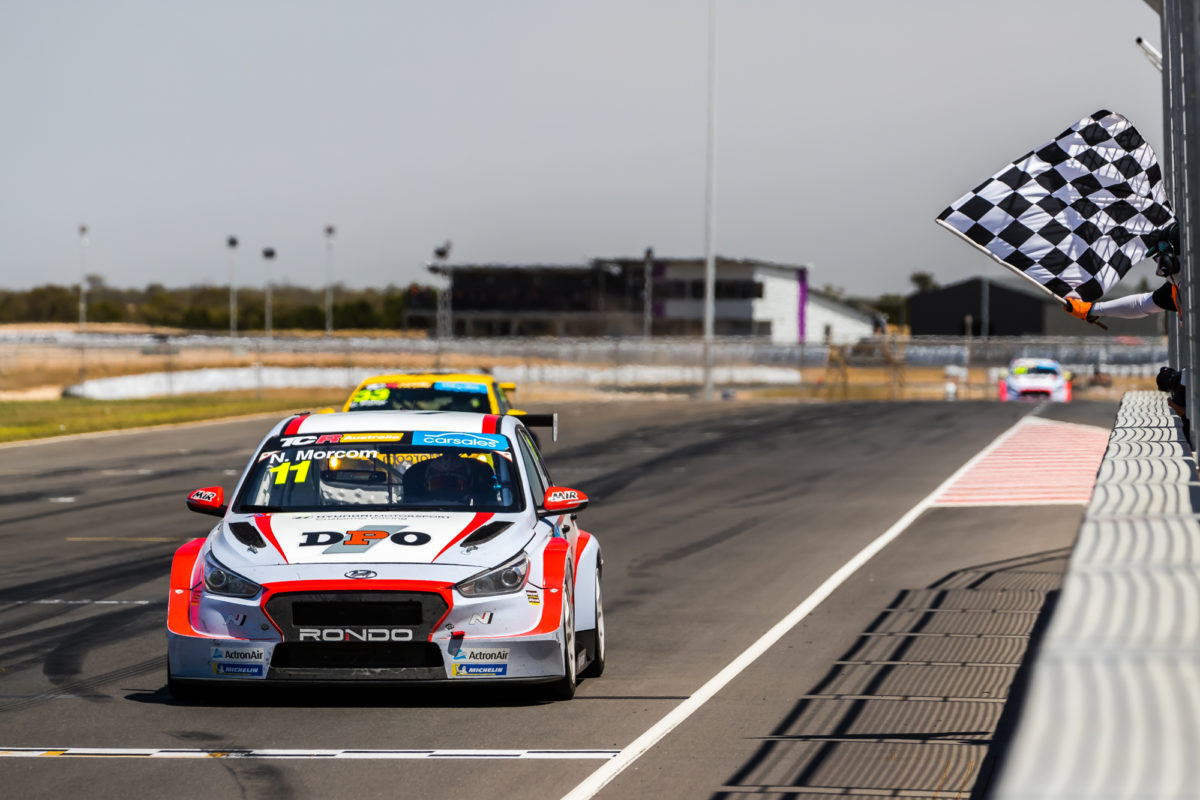 Rising through the field as those around him struck trouble, Morcom (Hyundai i30N) charged from sixth on the grid to claim the top step of the podium.

James Allen (Alfa Romeo Guilietta) ran wide as the field rounded the right hand sequence midway around the lap of the circuit, bouncing through the grass before rejoining.

A torrid opening lap saw Tony D’Alberto (Honda Civic Type R) drop to 17th by the end of the opening lap, while Peugeot’s Aurelien Comte was going the other way as he climbed to eighth.

Morcom had put a move on Brown at the Hairpin, with Pither following the Hyundai driver through to push the champion-elect two places in a single corner.

Next time through Pither collected the errant spring left by Ingall’s car, though it did nothing to hamper his immediate progress.

Soon after Moffat pulled off the road while running second, coming to a stop midway around the lap as he entered Elfin Straight.

With Moffat out, Morcom moved to second and Pither third, Brown having dropped 2.5 seconds further back in fourth and under the attentions of Cameron.

It promoted Morcom to the lead, with Pither glued to his rear bumper, with Brown third and Cameron fourth.

Comte’s early progress stalled, as it had done in the day’s earlier race, the Frenchman holding down 10th ahead of Alexandra Whitley (Volkswagen Golf GTI).

With two laps to run he fell victim to D’Alberto, a change of position which would ultimately see second in the championship – and $50,000 – change hands.

Morcom held on to take his first race win in the series, holding off Pither by seven tenths.

Brown was third from Heimgartner with D’Alberto fifth to confirm himself second in the championship.

In the run to the line, Cameron’s ailing Volkswagen was mugged by both Comte and Tim Brook (Cupra Leon) to finish 10th, dropping to third in the championship.