Miller hails Lorenzo as a ‘legend’ of motorcycle racing

Miller hails Lorenzo as a ‘legend’ of motorcycle racing 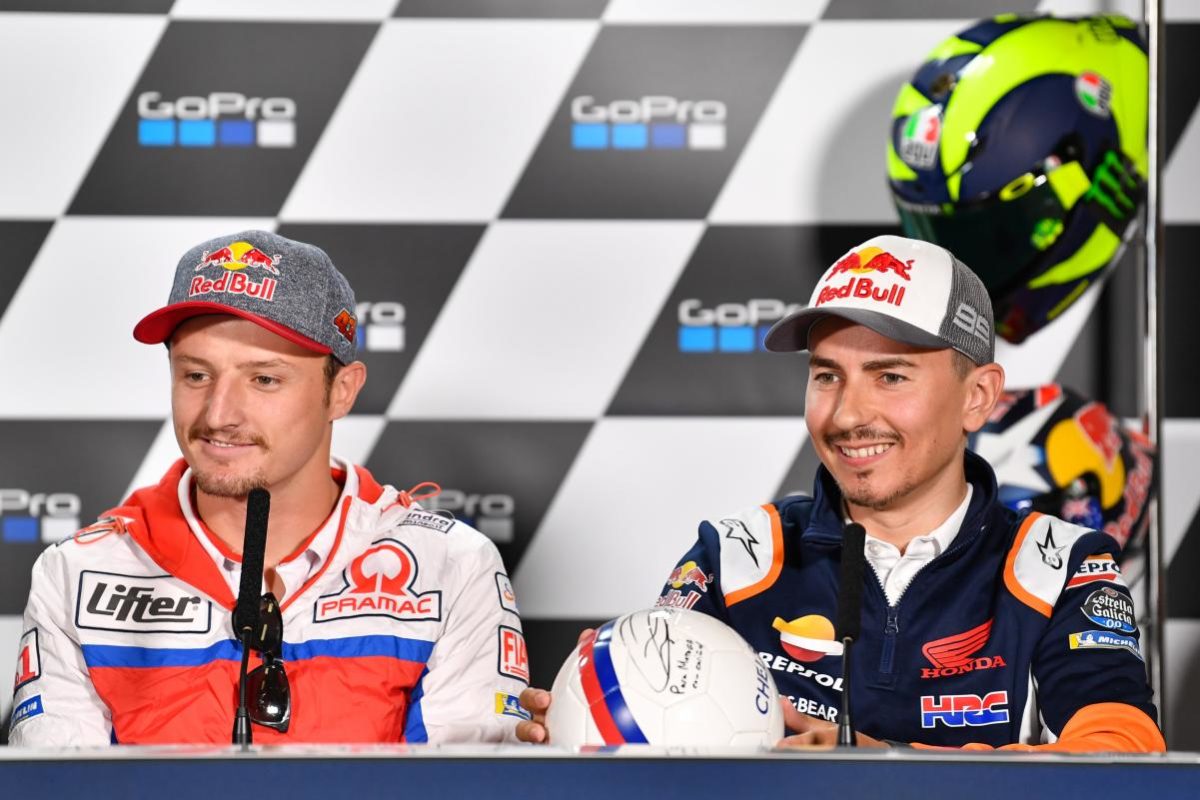 Jack Miller has described Jorge Lorenzo as a legend of motorcycle racing after the three-time premier class world champion announced his retirement.

Lorenzo won the MotoGP title in 2010, 2012, and 2015, the last making him the only rider to deny Marc Marquez the championship since the latter stepped up to the premier class in 2013.

Citing injury and an inability to adapt to the tricky Honda RC213V, this weekend’s Valencia round will be Lorenzo’s last despite having a year to run on his HRC contract.

Miller joined the stream of tributes to the 32-year-old, who also won the 250cc championship in 2006 and 2007, as well as suggesting that the task of trying to adapt to yet another manufacturer after riding for Yamaha and Ducati in the preceding three years was too much for the Spaniard.

“As a rider he’s a five-time world champion, and he’s a legend in that aspect for sure,” said Miller.

“The guy is the only one to top Marc at the moment, so for sure I think he’s no slouch, but as of recent he’s been struggling.

“Also, (in) this time in MotoGP history it’s kind of hard to be swapping machinery like that and jumping from manufacturer to manufacturer.

“It’s so hard because the biggest thing is understanding how the tyres work on each bike, how each bike works, what is it’s strengths?

“And you can’t do that in winter testing. You need racing, you need experience and it’s hard to do.”

Miller, who has been the subject of recent reports that he could be swapped with factory Ducati rider Danilo Petrucci, also reiterated that “My main goal is to go to the factory Ducati team.”

Cal Crutchlow and Johann Zarco are two of the more obvious candidates to take over Lorenzo’s ride at Repsol Honda, although neither indicated that any offer had been made.

“I don’t know,” said Crutchlow, who is LCR’s team leader and thus Honda’s most senior non-factory team rider, about how Lorenzo’s retirement might affect him.

“At the end of the day this is the first I’ve heard of it as well, same as what all you guys did.

“Actually, I knew when I landed which was 2:21 into Valencia airport and I got asked to come to the press conference.”

For Zarco, a call-up to the factory Honda team would complete a remarkable turnaround after he was granted a release from Red Bull KTM Factory Racing due to his difficulty in riding the Austrian manufacturer’s RC16.

The Frenchman was dropped from KTM’s line-up altogether midway through the season, but has been allowed to contest the final three rounds as an injury replacement for LCR’s other rider, Takaaki Nakagami.

“Since August, I don’t know what I can do for next year. I still don’t know now but now on the paper there is a possibility,” said Zarco.

“The first target is the MotoGP category for sure. I am discovering a super team here with Lucio Cecchinello on a good bike too. It is all a bonus where I can be.

“For sure the Repsol Honda Team is the best one and the factory team and just from that would be an exceptional dream to catch in this complicated season.”

Repsol Honda Team Manager Alberto Puig said that “we don’t have a clear answer” as to who will take the seat, but confirmed that Lorenzo advised of his decision in the days after the Malaysian MotoGP.

Crutchlow, meanwhile, described Lorenzo’s retirement as a ‘sad day’ for MotoGP and asserted that the rider who beat Valentino Rossi at Yamaha could have become competitive for Honda.

“I think the first thought should be that it’s a sad day for our sport,” said the Brit regarding the questions about his own future.

“I think that he would’ve come good on the Honda. I don’t know when, but he knows how to ride a motorcycle. I still get to see his data now and the way he brakes, the way he does things, is incredible.”

Crutchlow said the situation was similar when he rode for then-Yamaha satellite team Tech3 and got to see how Lorenzo worked for the Iwata factory.

“Me and Colin (Edwards) used to laugh all the time, we used to take him out of the equation (at Yamaha),” he added.

“It’s a little bit like Marc at Honda. When we were at Yamaha, if you looked at his settings on the bike, everybody that rode it, it was never going work.

“But he always rode it like that week in and week out. And he didn’t really change much. He just rode this bike that was the same wheelbase.”