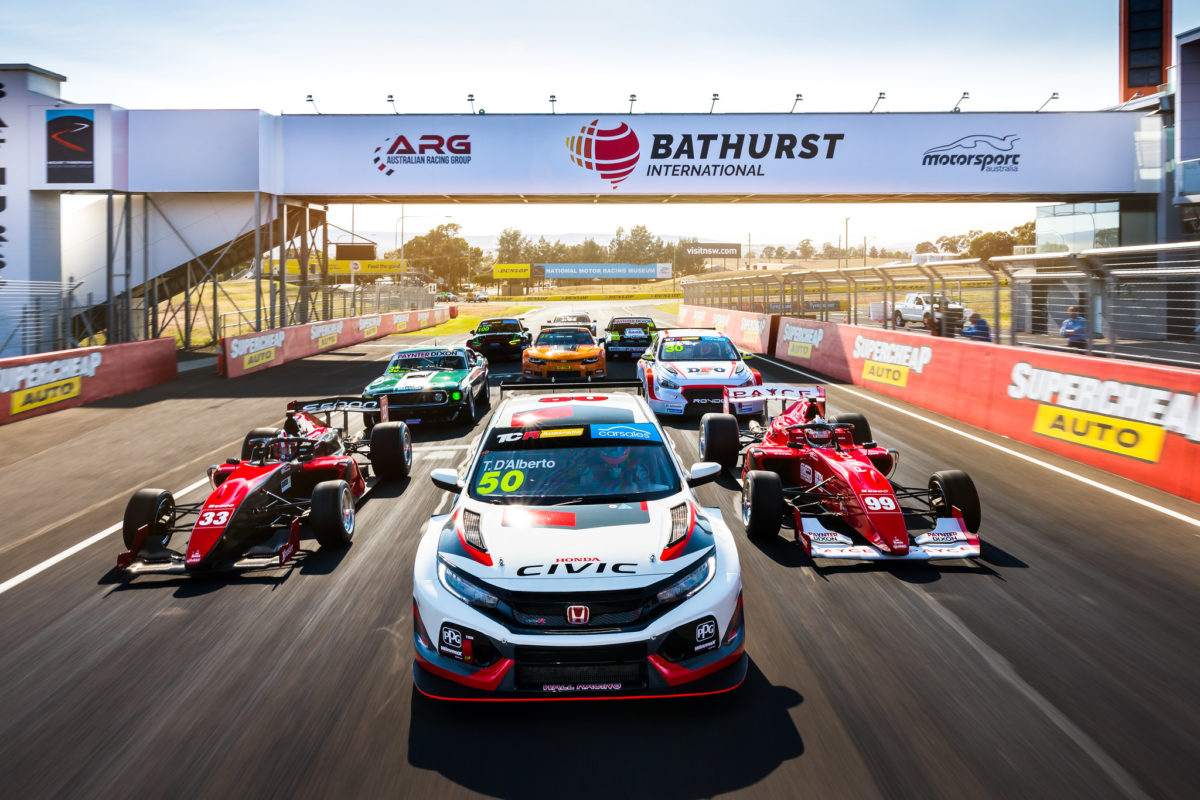 The Australian Racing Group has officially launched the new fifth event at Mount Panorama, which will be known as the Bathurst International.

Today it has been announced the all new motorsport event, headlined by an international TCR enduro with the date subject to confirmation of international racing calendars.

UPDATE: Since the publication of the information received from ARG this morning, Speedcafe.com has been informed by the organisers the date is not yet set and will avoid a clash with the Supercars series finale that is currently due to take place on December 4-6 next year.

Organisers have confirmed the Bathurst International will feature a standalone non-championship, two driver 500km TCR international race, which is expected to attract teams from all over the world.

The support bill will feature S5000 single seaters, subject to confirmation from the FIA, with several international drivers expected to be invited to compete.

Touring Car Masters will have a spot on the support bill with the category set to contest a non-championship event as previously reported.

They will be joined by the TA2 muscle cars which will have their own race around the 6.2km circuit that is also expected to include international entrants.

The bill will be completed by LMP3 prototype sportscars.

The new global event is a joint venture between the Australian Racing Group, Motorsport Australia (CAMS) and the Bathurst Regional Council.

“This event was presented as a true opportunity to bring a new international focus to Bathurst. Up to now there has been limited opportunities for international drivers to compete at Australia’s best race track in cars they are used to racing in their home series.

“With the variety of categories on offer at the event, and a date that comes after most global series have concluded means the Bathurst International will see international drivers, teams and their cars compete head to head with Australia’s best drivers across multiple races over the event weekend.”

Bathurst mayor, Cr Bobby Bourke added: “We are excited to partner with ARG to bring this exciting new event featuring a range of cars and drivers from all over the world to Mount Panorama.

“An event of this calibre will bring an international focus to the racing circuit not seen before.”

“Bathurst is one of the best race tracks in the world – it’s a kind of mix between Spa and Macau,” said Priaulx, who has multiple starts in Supercars’ Supercheap Auto Bathurst 1000.

“It will be fantastic to drive there in a TCR car that will perform really well over the top.

“I have very fond memories of my previous experiences on the circuit and I am sure that the TCR race will provide a very exciting show. I’m looking forward to hearing all about it.”

“Bathurst is an iconic race track, so to have the opportunity to compete against some of the world’s best touring car drivers and teams is something that I’m really excited about,” said Brown.

“The TCR cars will suit the Bathurst circuit, especially across the top of the mountain. It will be a wild ride, and I reckon that that their speed will surprise a a lot of people.”

Meanwhile, touring car legend John Bowe is looking forward to competing in TCM and is also tipping the S5000 cars to break the lap record.

“While I’ll have my own racing focus, I feel that the S5000s are going to produce some unbelievable racing and lap times,” said Bowe.

“Those cars will be very fast and there’s no doubt that their power and handling will see the lap record be broken.

“The S5000s is a true driver’s class. Bathurst is a circuit that is not for the faint hearted on the best of days, so the addition of S5000 will make for a true racing spectacle.”

The Bathurst International will be held from December 4-6 next year.