Waters hits out at Kostecki for ‘bloody stupid’ clash

Waters hits out at Kostecki for ‘bloody stupid’ clash 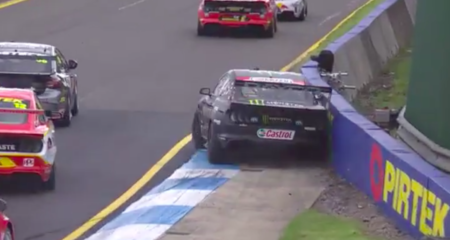 Cameron Waters has hit out at Jake Kostecki for what he described as a ‘bloody stupid’ clash that has severely dented his and Michael Caruso’s Sandown 500.

Contact between co-drivers Kostecki and Caruso, who were at the wheel of their respective #56 and #6 entries at Turn 4 resulted in the Tickford Racing Mustang finding the wall on the exit of the corner on the Lap 36 restart.

Caruso was forced to limp back to the pits with damage to the front right of his car, before rejoining the race almost 12 laps down after repairs were completed.

An angry Waters, the primary driver of the entry, was far from impressed with the incident.

“Look Jake’s obviously got a bit of a run on ‘Caruse’, Caruso’s left him room, and he’s just hip and shouldered him off and then left him no room to come back on the track,” said Waters

“It’s bloody stupid, you know, you’ve got these wildcards coming in and they’re racing obviously fast but they’re just dumb.

“Taken us out of the race, we had a fast car we were just trying to be in there at the end. Just wiped out by stupidity.”

Stewards investigated the incident but deemed the clash warranted no further action.

The fallout of the incident appeared to continue on the track once Brodie Kostecki took over the car with the driver making a hand gesture to Waters as he passed the Mustang.

Jake Kostecki was unfazed by the incident and the comments made by Waters when quizzed by Speedcafe.com.

“He (Waters) can say whatever he wants but I was down the inside and they gave me no room,” said Kostecki.

“I guess we’re wildcards so that’s why maybe he’s angry. He can say whatever he wants, it doesn’t faze me.

“I’m not here to make enemies, I like to be friendly with everyone. I guess maybe it was just heat of the moment, I don’t know.”

It proved to be a hectic start to the Sandown 500 with the Safety Car deployed on Lap 32 due to a multiple car incident involving Luke Youlden (#9 Penrite Racing), Dale Wood (#15 Kelly Racing) and Richard Muscat (#34 Garry Rogers Motorsport).

Wood had a slight overlap on Muscat with Youlden in similar situation behind.

As Wood moved to the left to counter Muscat, Youlden did the same behind resulting in contact firing himself and Wood into the outside wall on the back straight.

Stewards declared that no drivers were wholly or predominately at fault for the clash.

The #15 Nissan rejoined the race after repairs while the David Reynolds/Youlden entry was forced into retirement.