Holdsworth ‘tearing up’ at thought of drought breaking podium

Holdsworth ‘tearing up’ at thought of drought breaking podium 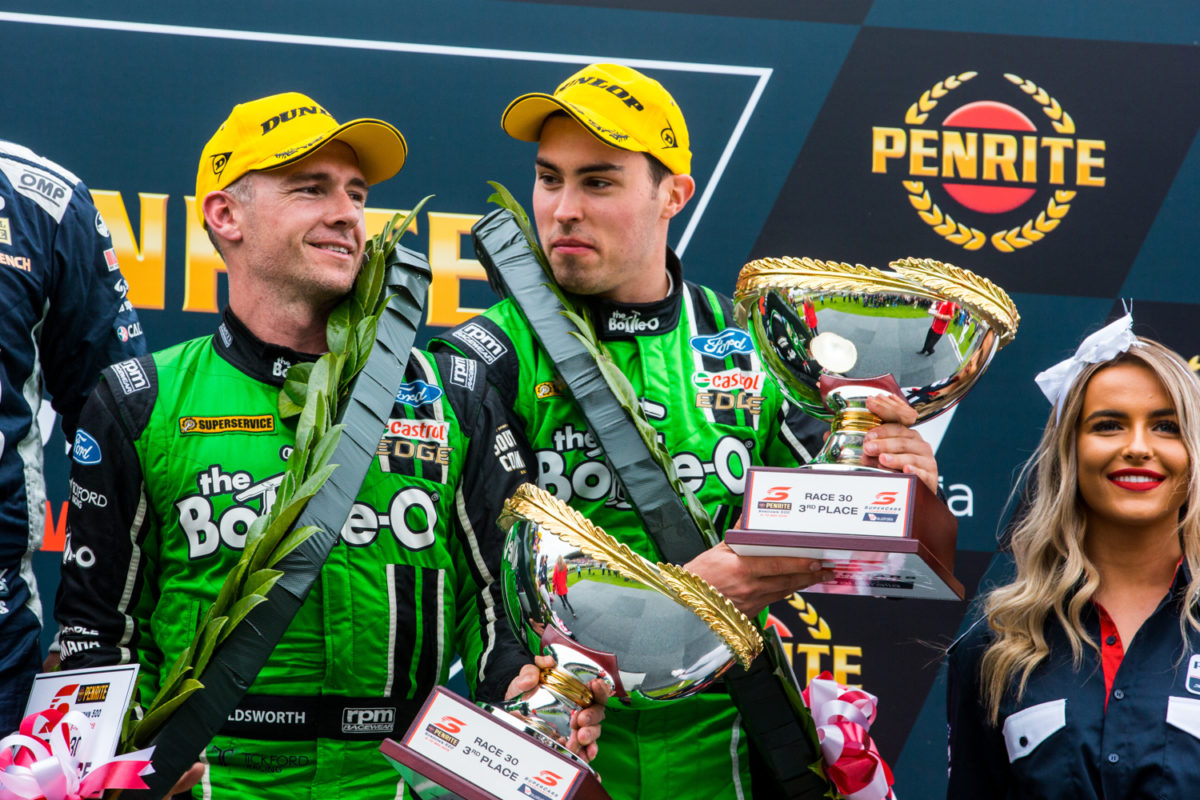 Lee Holdsworth admitted he was beginning to tear up in the car at the thought of ending his Supercars podium drought at the Penrite Oil Sandown 500.

Holdsworth slipped out of the third position on Lap 136 having been passed by Chaz Mostert but capitalised on a damper failure for race leader Shane van Gisbergen to score a breakthrough podium, finishing behind team-mates Mostert and James Moffat and winners Jamie Whincup and Craig Lowndes.

The success ended a barren rostrum run that had stretched back to a victory for Erebus Motorsport at Winton in 2014.

After a series of tough seasons, the 36-year-old was emotional in the final laps knowing the podium was in sight.

“Well it was nice to actually have some good luck for once, because we’ve been on the wrong end of that so many times just recently where we’ve been a shot at podiums,” said Holdsworth.

“So, we’ve been building on the car all year. We started the year well off the pace, and we’ve just been honing in on a set-up, and worked really closely with (engineer) Sammy (Scaffidi).

“From halfway through the year onwards, we’ve got on top of it, and we roll out with a good car at every round now.

“I knew that we had a car that was going to be good to be up the front, and Thomas just did an amazing job yesterday and today.

“I’m just stoked to be back up on the podium. It’s been way too long, and it’s a really good feeling.

“I was tearing up a little with about six (laps) to go, and I thought ‘I’ve got to pull myself together here, because it’s not over.’ It’s great, I’ve really enjoyed working with Thomas, and we’ve had a pretty solid enduro campaign.”

The success arrives with his Supercars future yet to be confirmed although it is expected that Tickford will re-sign Holdsworth for 2020.

“I’ve just been concentrating on doing my job, and doing it well, and continuing to get stronger every round – and you build your confidence as well, but I’m feeling pretty confident that I’ll have a few years left in me yet,” he added, when asked about his future.

Meanwhile, for Randle the result marked the 23-year-old’s first podium in Supercars’ top tier, rendering the moment as a special one in his fledgling career.

“I was pretty nervous – because at the time I was racing (Fabian) Coulthard, and then after the all the stops we came out the front of him and then I think a couple of laps later, Chaz came out of the pits,” said Randle.

“So we knew the race was on for P3 with Chaz. They definitely had the speed over us in that last stint, and Chaz and Moff drove really well today.

“It’s great to have two team cars on the podium. Once we were in fourth, the nerves were pretty much gone and then I guess we got lucky with what happened to van Gisbergen, and like Lee said, I think it’s about time the luck changed for him.

“So it’s great to share the podium with Lee. It’s been an awesome ride and the team have been really accommodating, not just with my Super2 stuff, but being a co-driver with them.

“It’s been an awesome ride, and a great way to end the Pirtek Enduro Cup.”

Randle will return to Super2 duties at the Coates Hire Newcastle 500 from November 22-24.