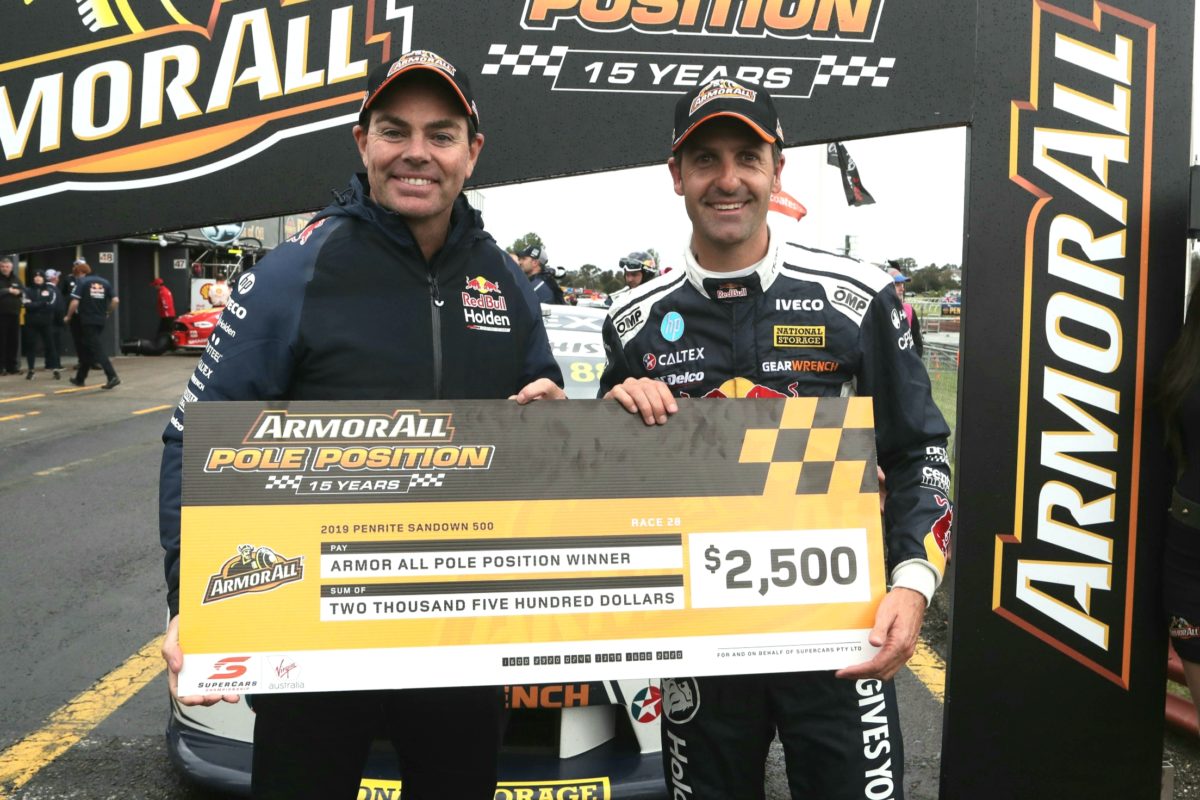 Jamie Whincup has put his Red Bull HRT entry on Armor All Pole Position for the Penrite Oil Sandown 500 as team-mate Shane van Gisbergen took himself out of Race 29.

Whincup led the primary driver sprint from start to finish after his co-driver Craig Lowndes had done the same in Race 28 earlier in the day, while van Gisbergen was a DNF with steering damage having clattered into Anton De Pasquale at the first corner.

Andre Heimgartner finished the 20-lapper in second position, meaning a front row start in tomorrow’s 161-lap enduro for the #7 Plus Fitness Altima.

On a track still wet from earlier rain, Whincup (#888 ZB Commodore) bettered fellow front row starter De Pasquale from the inside of grid as McLaughlin made a strong launch from sixth.

The latter found himself hard up on the left-hand edge of the track and backed out of a move on van Gisbergen as they arrived at the braking zone.

Van Gisbergen, on the other hand, careered into the side of De Pasquale’s #99 ZB Commodore, causing both the Triple Eight and Penrite Racing entries to spin at Turn 1.

Whincup led Heimgartner by 2.2s at the end of the standing lap, with McLaughlin third, De Pasquale 15th, and van Gisbergen seeming struggling to get his damaged #97 ZB Commodore back around the circuit.

Worse was to come for De Pasquale when he was issued the drive-through penalty for the incident, a decision which Driving Standards Advisor Craig Baird would reportedly admit was erroneous, which put him to the back of the field.

Whincup was clearing out by several tenths of a second per lap at the head of the field, and his lead was over seven seconds after 11 laps.

Heimgartner continued to run in second position while Reynolds, who had passed Lee Holdsworth (#5 The Bottle-O Mustang) for fourth at the start of Lap 2, caught McLaughlin by Lap 14.

The championship leader was struggling with excessive tyre pressures and Reynolds made a straightforward pass on #17 at the start of Lap 16.

Davison, who had forced his way past Tickford stablemate Holdsworth a couple of laps earlier, also picked off McLaughlin at Turn 1 on Lap 17.

The field was split almost 50-50 in their choice of wets or slicks, and the former proved clearly faster as that group quickly monopolised the top half of the timing screen.

That also meant that, despite the race being only 20 laps long, the leaders caught the back-markers in the latter stages.

After his advantage had dwindled somewhat, Whincup was over seven seconds ahead again when he took the chequered flag, at which time Reynolds was 2.3s back from Heimgartner, and Davison close behind in fourth.

“We’ve been a little bit hit and miss in the wet this year, we’ve had some good performances and some ones that haven’t been so nice,” said Whincup, who officially collects the Armor All Pole Position along with Lowndes.

“(Engineer David) Cauchi did a great job with the car, the strategy with the tyres. Car was good and yeah, poles have been few and far between this year so we’ll certainly take this one.”

The latter had started last after James Moffat’s clash in the co-driver race, while James Courtney (#22 Mobil 1 ZB Commodore) rounded out the top 10 having been as high as eighth from 18th on the grid.

De Pasquale got home in 13th, the last of those on wets aside from the non-finishing van Gisbergen.

With championship points on offer, McLaughlin is now exactly 500 ahead of van Gisbergen at the head of the standings.

The warm up session for the Sandown 500 takes place tomorrow from 1000 local time/AEDT.