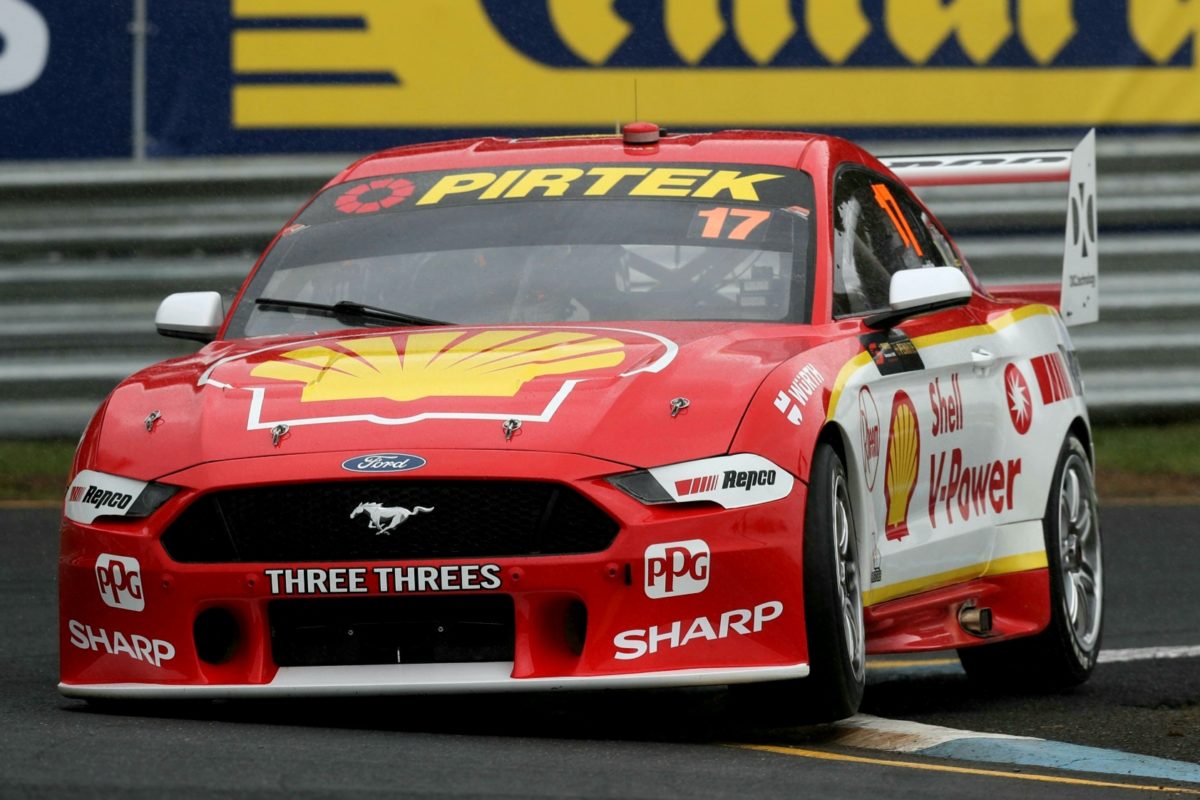 Scott McLaughlin edged Jamie Whincup out of first position right at the end of an Armor All Qualifying session at Sandown which looked to have been effectively truncated by rain.

McLaughlin’s effort means that Alexandre Premat will start this afternoon’s co-driver sprint from the front of the grid under the unique three-step process to set the starting order for the Penrite Oil Sandown 500 proper.

The #17 Shell V-Power Mustang will be joined on the front row for Race 28 by Craig Lowndes in the #888 Red Bull HRT ZB Commodore after Whincup’s best time stood up for second-fastest.

Whincup was one of two drivers who did not bother to go back onto the race track after it seemed that the return of showers would prevent any improvements on what was a frantic opening run.

That proved to be the case for three others besides Whincup in the top seven, including his team-mate Shane van Gisbergen, who ended up putting the #97 ZB Commodore fourth on the timesheet.

The two Triple Eight Race Engineering entries were split by Andre Heimgartner, who found enough time to put the #7 Plus Fitness Altima back into third position all told, having occupied the same spot after the first runs.

As light rain fell at the start of the 20-minute session, all 25 primary drivers headed onto the race track on slick tyres.

For the first few minutes, it was a case of the later the better as the fastest lap changed almost every time another car crossed the control line.

With rain reportedly falling again at the northern end of the circuit, the third flyers were the last for most drivers, at which time Whincup was on top with a 1:07.9159s from van Gisbergen, and Heimgartner.

The circuit got wetter over the next few minutes and initially it was only the Kelly Racing Altimas that went back out as proceedings moved past the halfway mark.

Even with all but Whincup and Jack Le Brocq (#19 NTI ZB Commodore) on the race track, lap times were still in the 1:13s in the 18th minute.

Fabian Coulthard (#12 Shell V-Power Mustang) jumped from 16th to 10th just after the chequered flag, before Heimgartner edged up one spot to second.

The latter’s team-mate, Garry Jacobson (#3 Rabble.Club Altima), who had not long been off the track at Dandenong Road, then leapt into fourth position.

Van Gisbergen went fastest to the second sector although found no improvement on the lap as a whole, but McLaughlin did when he moved himself from fifth to first at virtually the very end with a 1:07.7736s.

“I knew that the track grip was semi-there so I had a big go and it was really good.

“I was safe in the places I could spin out like Turn 4 and a few other places but once I got it hooked up and got going around the back and the places it was dry, the thing was good.”

Whincup was nevertheless satisfied with the decision to have put the cue in the rack after one run.

“I don’t think it was a matter of strategy, we sort of maximised our car in the first run so we weren’t really going to go much quicker,” he explained.

“It’s not the (official) pole, we’ve still got the qualifying races to go.

“Hopefully Lowndesy can do a good job in the first one and I can keep it on the black stuff in the second one.”

Race 28 of the Virgin Australia Supercars Championship, a 20-lap sprint for the co-drivers, is set to start at 1425 local time/AEDT.