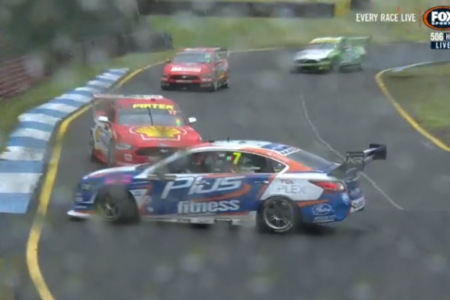 The Kelly Racing driver had enjoyed a strong race, sitting in fourth for the majority of the 20-lap heat, but was lucky to hang on to the position as heavy rain fell towards the end of the race.

Fullwood had just gone past Shell V-Power Racing’s Alexandre Premat at the end of Lap 11 when he ran over the Turn 3 exit kerb.

The 21-year-old completed a full 360-degree spin which he was able to control, avoid the barriers and incredibly continue without losing a spot to Premat.

“No (I can’t believe what just happened),” said Fullwood.

“It wasn’t planned as I’m sure you’re all aware. There certainly was no skill behind that; that was a lot of pot luck, but certainly not the kind of driving I’d like to display.

“(I was) very, very fortunate that I was able to stay out of everyone’s way, keep it off the fence and keep going. I think we had quite a lot of speed but just way too radical.

“I was having a pretty good race with Will (Brown) ’til I had one of my 15 moments and he pulled away, and then I could see Tommy Randle behind me as well.

“I did notice that, we’re going to go have this basically this same race in Super2 in an hour’s time.

“But it was pretty cool to see against the likes of Craig and Garth, they’re very good at what they do. To be in even the same league as them is pretty cool.”

Premat had the best view of the spin awarding Fullwood a 10 out of 10 for his efforts.

“I mean I was not involved in any incidents, but for sure we’ll give a 10 (out of) 10 for Fullwood doing like a 360 spin, That was pretty good,” said Premat.

“I could see that he had the spin, it was pretty slow, so I said ‘What should I do? Go right, left, stay?’ so I just kept going on behind him, just making sure I don’t get any contact.”

Fullwood’s team-mate Andre Heimgartner will start this afternoon’s Race 29 from fourth on the grid.