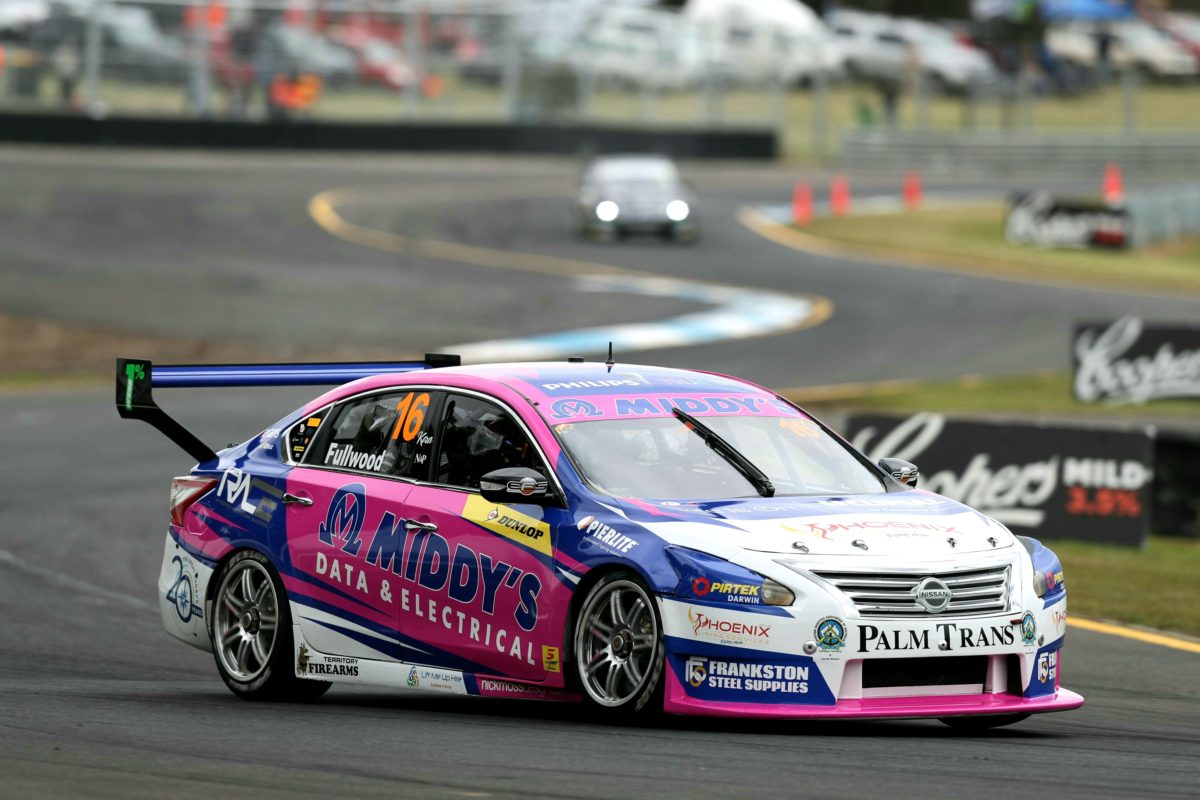 Series leader Bryce Fullwood has denied Jordan Boys a maiden Armor All Pole Position in Qualifying for Race 1 of Round 6 of Dunlop Super2 at Sandown.

Boys moved back to the head of the field in the final minute of the quarter-hour session but Fullwood then reset the practice/qualifying lap record for the second day in a row with a 1:08.1697s in the #16 MW Motorsport Nissan Altima.

The result is nevertheless a first front row start for Boys, in the #49 Image Racing VF Commodore, who is the odd man out among five Pirtek Enduro Cup co-drivers in the top six.

Boys had been fastest in Practice 1 and found himself in the same position after the first runs on a 1:08.6122s.

Fullwood sat second at that point, ahead of Ash Walsh (#35 Matt Stone Racing VF Commodore) and Thomas Randle (#5 Tickford FGX Falcon), the latter of whom had run off at Turn 1 either side of his early hot laps.

Randle was the first to have a real crack at a second run but, perhaps due to the overcast conditions, needed two laps to warm up his tyres despite Super2 running on the super soft compound this weekend.

The Tickford driver went quicker on consecutive laps as he moved to a 1:08.6269s which had him into second position again, before Will Brown jumped from eighth to first with a 1:08.5929s in the #38 Eggleston Motorsport VF Commodore.

Brown ran wide at Turn 1 at the start of his next lap and promptly pitted, while Randle also went no quicker.

Boys, however, rolled out a 1:08.3389s to reclaim provisional pole, before Fullwood came through with a lap 0.0533s faster than he had gone in Practice 2 on the afternoon prior.

“It’s taken me quite a while to get one,” said Fullwood, who only got his first Armor All Pole Position in Super2 last time out at Bathurst.

“I felt like I’d been so close leading up to Bathurst and then awesome to get another one straight off the back of Bathurst.

“Huge credit to the guys at MW Motorsport, the car’s been an absolute rocketship this season.

“I was fairly happy with my lap and absolutely staggered to come away fastest.”

Brown and Randle, the latter of whom is second in the series at 357 points adrift of Fullwood, will share Row 2 for the opening race of the penultimate round of the season.

Jack Perkins (#54 VF Commodore) made for two Eggleston Motorsport entries in the top five, with Walsh joining him on the third row.