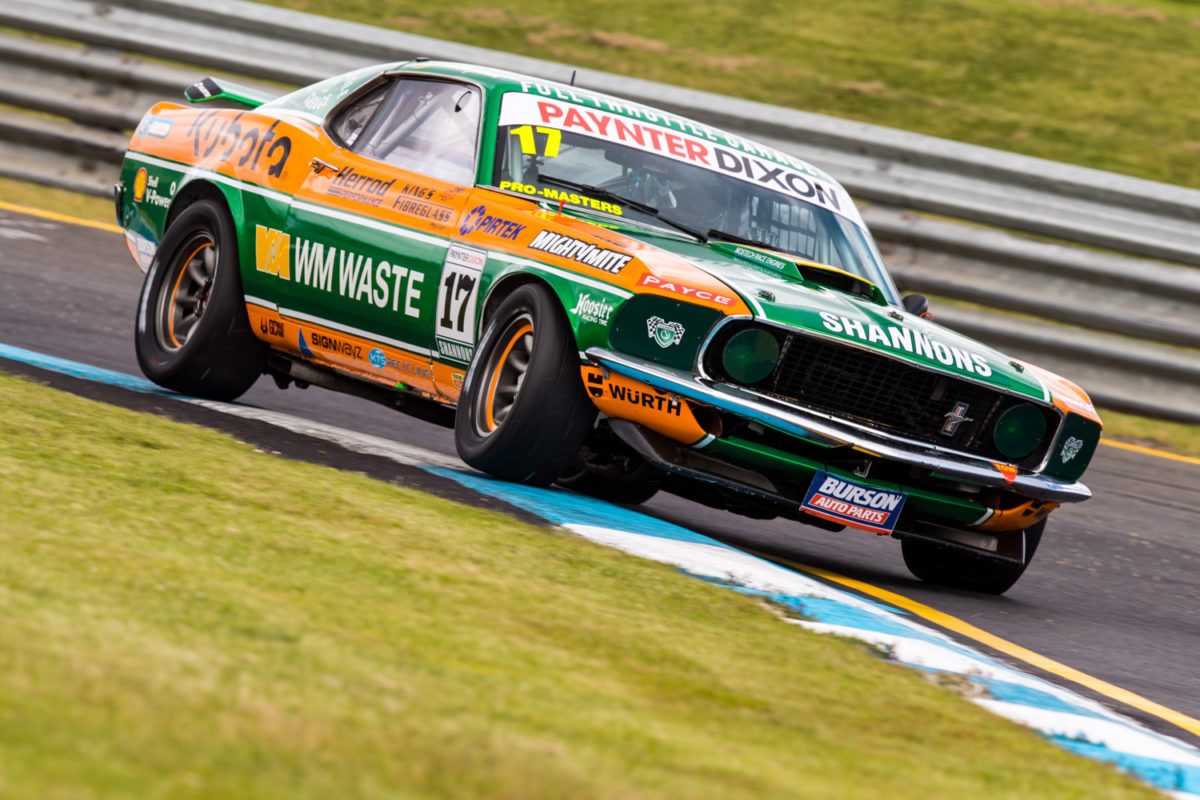 Steven Johnson has qualified on pole for the final round of Paynter Dixon Touring Car Masters in an ultra-quick qualifying session at Sandown.

After the top eight broke the practice record in the day’s earlier 20-minute session, another three bettered the new benchmark in qualifying.

Johnson faced a challenge from John Bowe put prevailed in the end with a late 1:13.5688s in his Ford Mustang Fastback.

Bowe had been fastest prior to that lap with a 1:13.7333s and will also take up the front row in his SL/R 5000 Torana, while Aaron Seton (Ford Boss Mustang) makes for three famous names in the top three.

The next three on the timesheet were Camaro drivers who all spent brief moments in first position, namely Ryal Harris, Adam Bressington, and Adam Garwood respectively.

Harris managed to make the second row despite a ragged session in which he also suffered from what appeared to be a major front-end shimmy.

Touring Car Masters is on-track three times tomorrow, with the Trophy Race at 0845 local time/AEDT and full series points-paying races from 1125 and 1335. Peter Hackett has chipped away at Geoff Emery’s Australian GT Championship lead by winning Race 1 of the final round after an early compulsory pit stop.

In a race shortened from 40 minutes to 20 due to an earlier delay in the Penrite Oil Sandown 500 program, Tony Bates (Audi R8 LMS Evo GT3) jumped from the second row to take the lead into Turn 1.

He ran off at Dandenong Road on Lap 1 and dropped to fifth, giving Ryan Simpson the opportunity to sprint away at the front in the 59 Racing McLaren 720S GT3.

Liam Talbot (Lamborghini Huracan GT3) had risen to second, with Hackett close behind, by the time the CPS window opened, and the latter brought the Eggleston Motorsport Mercedes-AMG GT3 into the lane on Lap 7.

Hackett, Griffith, and Talbot continued in first through third until the chequered flag, around which time rain started falling, while Ross charged back to fourth.

His cause was helped when Bates ran off at the end of the back straight on what would be the penultimate lap, then came to a halt on the racing line with an apparent mechanical problem.

Craig Thornton brought an early end to proceedings when he lost the rear of his car and shunted the fence between the esses and Dandenong Road.

There had been just enough time for Brook, the series leader, to grab pole for the penultimate round of the season with a 1:25.9900s.

In what was effectively a pair of one-lap dashes either side of an early red flag, Luke King was second fastest at 0.1153s off the pace, ahead of Aaron Borg, Jaylyn Robotham, and Zach Loscialpo.

Dylan Thomas managed to qualify sixth despite being unloaded by Declan Fraser at Dandenong Road on their first runs, which was the reason for the earlier stoppage.

The first two races of the weekend take place tomorrow at 0910 and 1300 local time/AEDT.