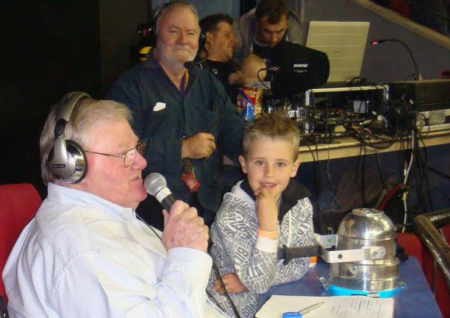 A shocked motorsport community has reacted in unison with a wave of tributes for Australian motorsports media and promotional legend Mike Raymond, who has passed away after a complication from pneumonia.

A pioneer of the sport in so many areas, Raymond’s passing was a shock to many in the industry after his short illness which was kept confidential by his family at his request.

Christensen worked with Raymond on the media production and commentary of the original Supercross Masters and became lifelong mates.

“He was just one of the funniest guys you would ever meet,” said Christensen.

“You would go to dinner with him and it would not take long for the whole restaurant to be looking at you because of the noise and laughter that was coming from the table.

“When it came to commentary he had one simple rule – never leave the punters bored.

“I would put him down as the most influential person in Australian motorsports for the last 40 or 50 years.

“He had total engagement with everyone from drivers and riders to the world’s leading administrators.

“He was a guy who was always seeking the impossible challenge.

“Mike would focus on something like getting AJ Foyt out to Australia to race and then make it happen.”

Christenen said Raymond was a ‘pretty handy bloke to travel with’, having attended some of the world’s biggest events together including the Indianapolis 500, Le Mans 24 hour, Daytona 500, Charlotte 600 and Spa 24 Hour.

“The bloke could open a few doors,” Christensen laughed.

“If you were at a NASCAR event and you wanted a seat in the France Family suite, then Mike was your man.

“He had built so many amazing relationships on so many levels around the world.”

Christensen said that Raymond had an amazing energy, even up until his recent illness.

“He was always on the go,” said Christensen.

“Many times I would end up at his house for dinner and we would polish off a couple of bottles of Mateus (wine) and he would fall asleep on the floor.

“I would wake up at 6am the next morning to the sounds of him on the phone giving someone a pull through about something.

“It is rare that someone like Mike comes along. He was the Winx of his class.” 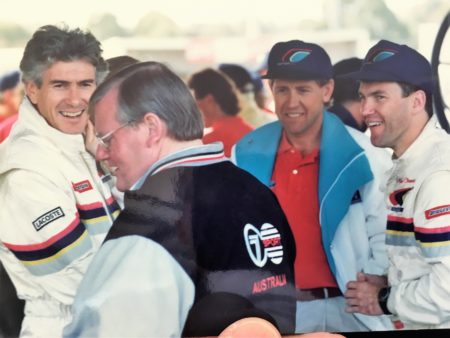 “With a broken heart, we announce that yesterday afternoon our beloved father Mike took his final breath. He was surrounded by immediate family and passed peacefully at Norwest Private Hospital,” Andy Raymond said on Facebook.

“Complications from pneumonia saw him spend a fortnight in hospital where he was given the best possible care and chance. In the end, he made the decision to say goodbye.

“His final day awake was spent joking and laughing with loved ones …. a wonderful and everlasting memory to cherish.

“We’re a strong family, we’ll be fine. Our only goal for the moment is to ensure our beautiful mum Carol is loved, cared for and cuddled.”

“Mike was a true pioneer in our industry and he will be sadly missed,” said an emotional Crompton during today’s Fox Sports coverage of the Sandown 500.

“He will be missed. He was the man that was the face of Channel Seven for so many years, he was instrumental in Supercars and the V8 category as we know it,” said Skaife during today’s Fox Sports coverage of the Sandown 500.

“He was a man that loved the sport and so much of what we have got today has been as a consequence of Mike’s contribution to this industry.

“We love him and our thoughts are with his family and friends.”

“It is with great sadness that we learned of the death of legendary Supercars commentator Mike Raymond,” said Seamer.

“Supercars has lost not only one of the truly great exponents of the sport but also one of its heroes, who was the voice of Australian Touring Cars in the 1970s through to the 1990s, calling our great race, the Bathurst 1000 for more than 20 years.

“Fans can still remember Mike Raymond starting the Bathurst broadcast in a way only he could.

“His love of racing and his heavy influence in the production of a number of Logie Award-winning Bathurst 1000 broadcasts, played a major role in getting manufacturers, a headline sponsor and CAMS to change from what Australian Touring Cars was to what is now the Virgin Australia Supercars Championship.

“His passing is a great loss for the entire Supercars family, Australian broadcasting and motorsport as a whole. All our thoughts go out to his family.”

“I’m deeply saddened we’ve lost Mike but buoyed by so many memories dating back to 1969 at Liverpool Raceway,” said McKay.

“We had our disagreements at times, for Mike could and would play hardball to get his way. And he with the power usually wins. But ultimately we’d all move on.

“Though Mike was known the length and breadth of Australia for his catchcry “Be There!”, which tagged his thousands of lively and at times outrageous speedway television commercials, it would be underselling his work.

“His imaginative genius was on show every summer at Liverpool as big names from midgets, sprint cars and bikes cascaded into town – Larry Rice and Gary Patterson (the Teacher and the Preacher), AJ Foyt, Mel Kenyon, Sleepy Tripp, Ivan Mauger, Ole Olsen and others.

So many people in the world of motor racing and the media owe so much to Mike directly and indirectly. His promotional boldness in speedway carried through to television, where he was a pioneering force in live race coverage for the Seven Network.

“Mike called more than 20 Bathurst 1000s and countless touring car and supercars races. But much of his work was done out of sight, behind the scenes, arguing for fresh ideas such as introducing Chris Economaki and Doug Mulray to the commentary booth.

Recognising the lurking talent in Neil Crompton, then nurturing and encouraging the boy from Ballarat was another source of pride.

Always seeking to improve the product, Mike pushed hard to add a clearer international flavour to The Great Race; Johnny Rutherford and Janet Guthrie were the result. Not a resounding success on the track, but huge in terms of publicity.

His circle of friends covered the globe. Travelling to the Indy 500 with Mike in 1978, Phil Christensen, Colin Young and I were constantly amazed how doors flew open wherever he went.

“We had access writ large. To the Brickyard, to the Indy museum, to Gene Welch’s home, to say ‘hi’ to AJ Foyt, Larry Rice and Johnny Rutherford, to go out drinking with Sleepy Tripp…

What an influential life Mike had. Even with all his achievements, Mike possessed an easy modesty. He was proud of what he had done, but didn’t feel a need to constantly remind everyone.”

“The word ‘Legend’ is generally over used in the world of sports and business, but not in the case of Mike Raymond,” said Murray.

“He was a pioneer in so many ways and as a young journalist he always had time for me and crucial words of advice.

“He was a touch before my time in a professional sense, but that didn’t stop him from taking the time with this young kid from Albury trying to make his way in the business.

“I was thrilled to see him become a fan of Speedcafe.com and it was always cool to get a note from him every now and again telling us we were doing a good job or offering us advice on things we could tweak to improve it.

“He loved the sport, but he loved his family even more.”

Shocked & saddened to hear of the passing of Australian motorsports commentary legend #mikeraymond As a kid I watched endless hours of him calling races & in adulthood became good friends with him & the whole family. Mike was synonymous w Bathurst & great broadcasts. RIP mate 😢

“Sad day with the passing of Mike Raymond,” said Perkins via Facebook.

“The most passionate commentator of motorsports and a tireless supporter of V8’s. The influence Mike had on the industry and TV and the beginning of our current rules owes a great debt to Mike.

“The very enthusiastic and most likeable person you will ever meet. I for one of many will miss you.”

“Mike had a tremendous impact on motor sport and the work he did behind the scenes, from both a sporting and broadcast point of view, will certainly leave a lasting legacy,” Papadopoulos said.

“He was a fantastic commentator with an even greater personality and it takes someone special to be the face of a sport for as long he was.

“He will be sorely missed by the whole motor sport community. On behalf of CAMS, I would like to pass on our condolences to his family, friends and loved ones.”

“Deeply saddened to learn of the passing of Mike Raymond,” said Johnson on Facebook.

“A wonderful man who championed our sport to make it what it is today.

“He invented the Top Ten Shootout and our chats on Racecam were legendary. The soundtrack of so many great moments on Australian race tracks is his voice. My thoughts and condolences are with all his family and many, many friends.”

“Very sad news to hear today of the death of Mike Raymond,” said Seton on Facebook.

“He made an amazing contribution to Australian motorsport and its broadcasting.

“He and Seven Sport set the benchmark for world motorsport coverage in the 70s, 80s and 90s that we all benefitted from so much – sympathies to his family and friends.”