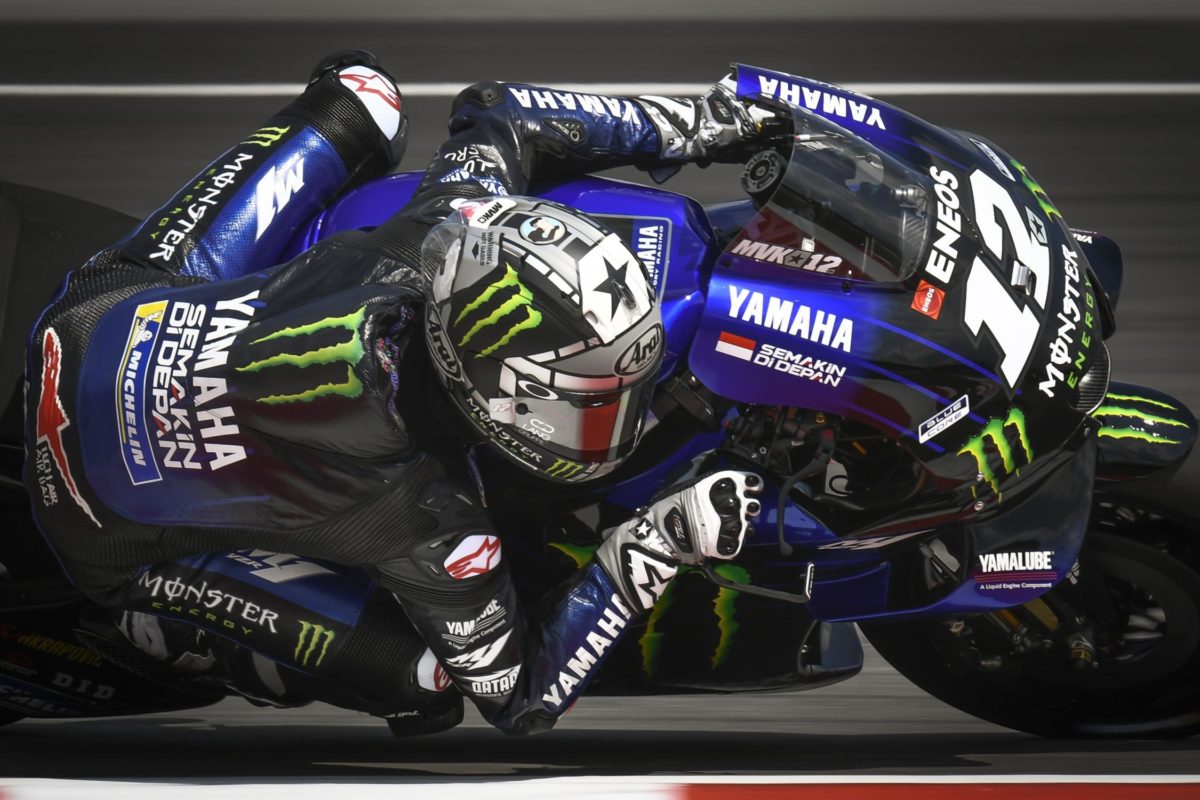 Maverick Vinales produced a faultless ride to clinch victory from Marc Marquez in the MotoGP Malaysian Grand Prix at Sepang.

The factory Yamaha rider dominated the penultimate round of the season once he found his way into the lead at the end the opening lap.

Vinales proved untouchable as he went on to take his first win since a triumph at Assen in June.

“What an incredible race,” said Vinales.

“We prepared for the race really good. I thought I had a good potential and I took the lead in the first two splits and then I kept pushing and pushing.

“What a shame what happened in Australia as I had big potential there too.

“I would like to dedicate this race to the kid (Afridza Munandar) who died yesterday, he was my favourite in the Asia Talent Cup, my condolences to his family.”

Newly crowned MotoGP world champion Marc Marquez once again showcased his talent, recovering from 11th on the grid to second.

The Repsol Honda rider provided the most serious challenge to Vinales having moved into second on Lap 3. The result saw the Spaniard set a new MotoGP record for most points scored in a season with 395 points to his name.

Australia’s Jack Miller (Pramac Ducati) led the opening lap and was in podium contention early on, before struggling for pace on soft tyres, that saw him drop to eighth at the finish.

It proved to be frantic start as Miller got the holeshot and stormed into the lead as the field headed into Turn 1.

Vinales slotted into second but it was fourth row starters Dovizioso and Marquez, who stunned the field to scythe their way through to occupy third and fifth respectively.

The Yamaha rider managed to find a way by Miller to lead at the end of the opening lap as Marquez managed to pass Franco Morbidelli (Petronas Yamaha SRT), Dovizioso and then Miller to take an impressive second spot.

Miller fought back but it was Marquez who eventually cemented second on Lap 3, before setting his sights on leader Vinales, who had broken away to a 1.5s lead.

It proved to be a disastrous start for pole-sitter Fabio Quartararo (Petronas Yamaha SRT), who dropped to eighth by the end of the opening lap.

At the front Miller, on the soft tyres, began to struggle losing out to Dovizioso at Turn 4 on lap 4.

The Australian then fell into the clutches of Rossi who made light work of the Ducati rider.

Miller was then caught up in a battle with Suzuki Ecstar rider Alex Rins which resulted in contact at the final corner.

Rins lost a piece from his fairing but it didn’t stop him from going on to take the spot.

Miller’s struggles continued and he would drop to eighth by the halfway mark.

Meanwhile, at the front Vinales continued to control the race ahead of Marquez, with all eyes on the battle for third between Dovizioso, Rossi and Rins.

However, nobody could touch Vinales, who took the win from Marquez.

Dovizioso briefly lost third spot to Rossi but recovered to claim the final rostrum from the fan favourite.

Rins came home in fifth ahead of Petronas Yamaha SRT riders Morbidelli and Quartararo, with Miller in eighth.

Danilo Petrucci (Ducati) crossed the line in ninth as Mir rounded out the top 10.

A rough day for Cal Crutchlow (LCR Honda), who started fifth, resulted in a crash at the final corner with six laps remaining.

The Brit joined Zarco (LCR Honda) and Andrea Iannone (Gresini Aprilia) on the list of retirements.

Meanwhile, in the afternoon’s Moto2 race, Alex Marquez wrapped up the world title after finishing second behind Brad Binder, while Thomas Luthi was third.

The MotoGP World Championship will head to Spain’s Valencia circuit for the final round from November 15-17.