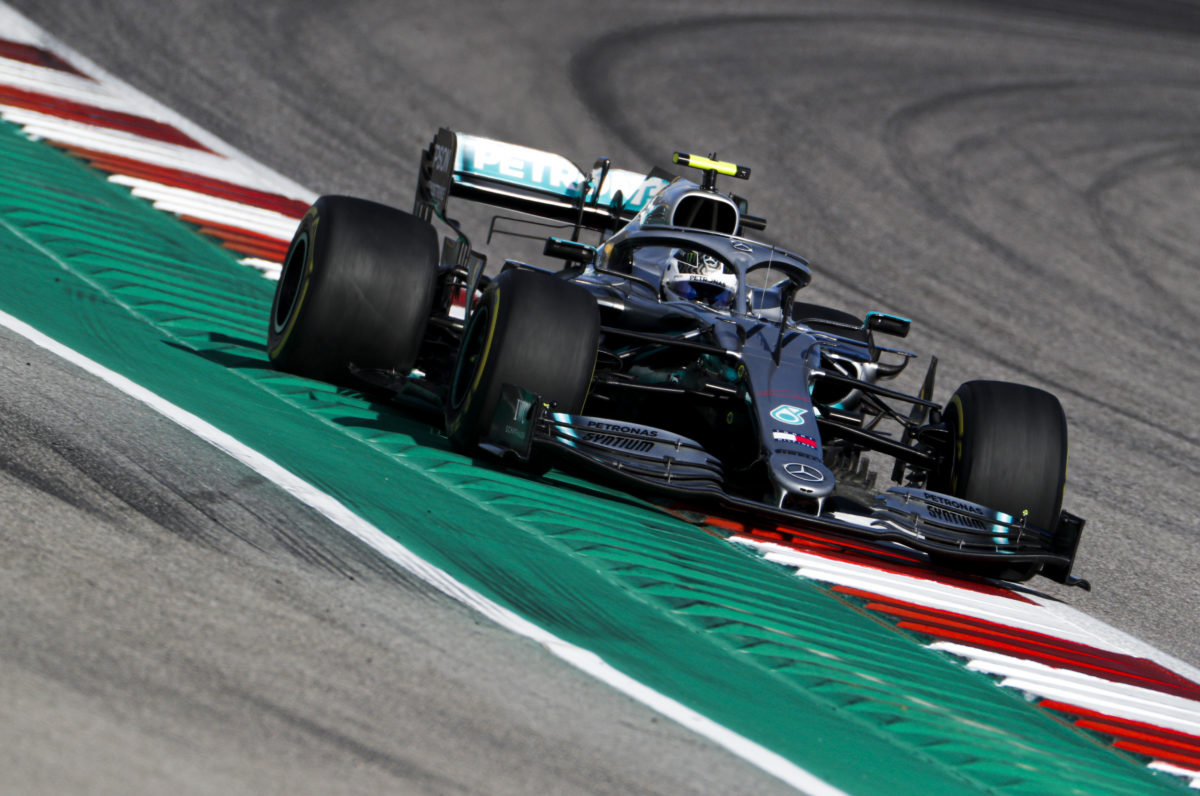 Valtteri Bottas will start from pole

Valtteri Bottas has claimed pole for the Formula 1 United States Grand Prix as team-mate and world championship rival Lewis Hamilton could do no better than fifth.

A strong opening lap in the final phase of qualifying booked his place at the front of the field before track conditions deteriorated in the following minutes to all but confirm his place on pole.

Hamilton could only manage fifth with his first flyer in Q3 before abandoning his second lap to confirm himself a place on the third row.

“Really happy about that. It was a nice lap in the beginning of Q3, we rarely get those kind of laps and on a track like this is a good feeling,” said Bottas.

“Yesterday was tricky, there were many things not quite right on my car but we managed to find all the reasons and did good work this morning with finding all the details.

“The last run was a bit less grip overall, sector one I was already losing like one or two tenths, so I’m glad no-one could improve at the end.”

It was a notable performance for Leclerc who’d suffered engine issues in Practice 3, and had been among those out on track early as qualifying started.

Also on track in that phase was Sergio Perez despite a pit lane start after missing the weigh bridge during practice.

The opening part of the session ended without incident, Robert Kubica, Perez, George Russell, Kimi Raikkonen, and Antonio Giovinazzi in the bottom five and eliminated from the session.

Confidence within Mercedes and Ferrari garages saw Hamilton, Bottas, Leclerc, and Vettel all head out on the medium compound tyres for their first run in Qualifying 2.

A better race than qualifying tyre, the yellow walled rubber offer up in the region of a second to the red walled softs.

Hamilton banked a 1:33.045s to set the early running with a tenth between all four of the front runners after their opening efforts.

Verstappen climbed to second on a set of medium tyres before Alex Albon went fastest on softs seconds later with a 1:32.898 in the second Red Bull.

For their second run Mercedes headed out on a set of soft tyres as an insurance policy while Ferrari backed their medium compound approach.

Slowing at the end of their laps, Verstappen and Bottas sacrificed their runs in order to not improve, therefore confirming they’ll start Sunday’s race on the medium compound tyres.

Late in the session there was drama as Hamilton, Verstappen, and Daniil Kvyat went three wide, the Red Bull driver having to bounce across the grass on the inside of Turn 19 to avoid contact.

With the exception of Kvyat losing his lap due to track limits the incident had no impact on the outcome of the session for the leading runners, though the Toro Rosso fell two places as a result of losing his lap.

Bottas set a 1:32.029 oh his first flying lap in Qualifying 3, nearly three tenths up on his team-mate who was only fifth after his opening run.

Daniel Ricciardo had the Circuit of the Americas to himself for his only Q3 run, having elected to sit in the garage as the rest of the field headed out for their first efforts.

It saw the Australian completing his flying lap as the bulk of the field exited the lane to start their second run.

A moment through the Esses on approach to Turn 9 and a wheel off the track saw the Renault driver move to eighth, 1.459 seconds away from Bottas’ provisional pole time.

Locking up into the first corner, Verstappen’s late flying lap was immediately compromised as he ran wide and dropped a couple of tenths and by lap’s end was unable to improve his position and remained third.

Hamilton aborted his final flyer, leaving Bottas on pole position while further back Carlos Sainz claimed seventh over Norris in eighth, Ricciardo dropping to ninth ahead of Pierre Gasly who rounded out the Top 10.

Hamilton needs four points from Sunday’s race to claim the world championship, meaning eighth or better will crown him for the sixth time regardless of what Bottas does.

The race is scheduled to begin at 0610 AEDT Monday.