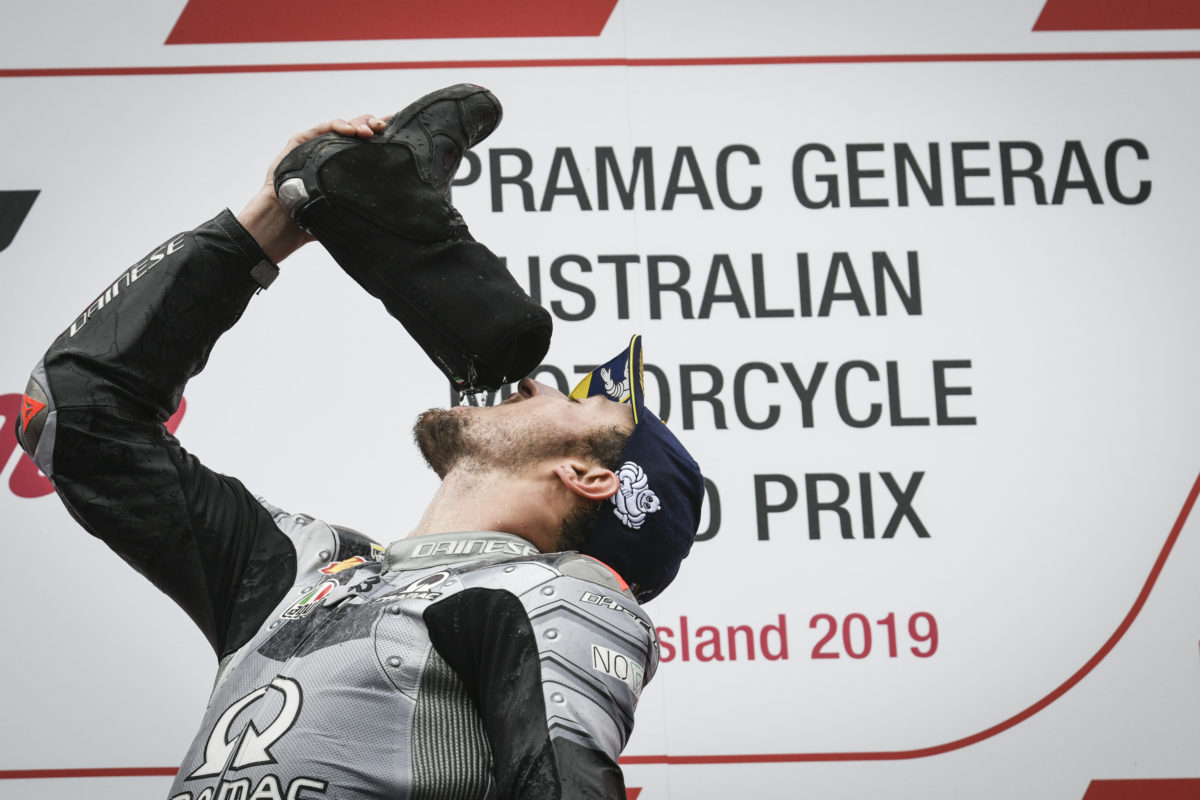 Jack Miller celebrates on the podium

Jack Miller’s first Phillip Island MotoGP podium was a lift for his New Zealand parents after their ‘rough’ night watching the All Blacks crash out of the Rugby World Cup.

The Townsville-born rider bagged a fourth top three finish of the season, a fifth in his MotoGP career, and his first on home soil in the premier class at the Pramac Generac Australian Motorcycle Grand Prix.

Miller’s performance came less than 24 hours after New Zealand went down to England by 19-7 in the first semi-final in Japan and therefore missed out on a shot at three straight World Cup wins.

When asked by MotoGP.com if the podium was among the best moments of his career, the Pramac Ducati rider responded, “Yeah, definitely.

“There may be one or two people happier (than me); I was able to see my granddad and grandma down at Turn 4, both were in tears, which was a great thing because both my parents are Kiwis, and they lost against England in the World Cup.

“It was a rough, rough atmosphere last night at the family dinner there.

“I said on my way out, ‘Ah well guys, at least there’s one in four years’ time; we’ll have a chance then,’ but I think this has definitely made their weekend a lot better.

“It’s unreal to be back on the box. I’ve always wanted to do this and it’s just an amazing experience.”

Miller qualified ninth in a delayed session which took place only hours before the race and found himself in the same position after the first dozen of 27 laps.

However, patient riding and his choice of the hard compound Michelin rear tyre saw him steadily rise to fourth with a lap remaining before Maverick Viñales went down while chasing eventual race winner Marc Marquez.

Miller did, however, have a nervous moment at Southern Loop on Lap 1 when he nearly did the same as Danilo Petrucci, who highsided and took Fabio Quartararo down with him.

“As I saw (Petrucci) leave the seat, I said, ‘Holy,’ that was so nasty, like violent, the way the bike just went (spins finger upward) and shot him,” he recalled.

“As we both went in and put full angle, we were a little bit wider, but being on the hard (rear tyre), didn’t have much grip.

“I was just trying to manage that, I lost a couple of positions there, and then I was just off the back of the group but I was trying to not do what I’ve done in the past, which is lead and, at the end of the race, be scrambling for grip.

“I ended up getting in behind Dovi (Andrea Dovizioso), and Dovi and I sort of settled in for a nice little leisurely ride, let’s say, and we’ll fight on the last lap.

“But then Pecco (team-mate Francesco Bagnaia), being the young fella, came in and he was into it, he was going really, really well, so I have to take my hat off to him because it’s not an easy track to ride and manage the tyre, and he did an amazing race.”

Miller remains eight in the championship ahead of this weekend’s Malaysian MotoGP.