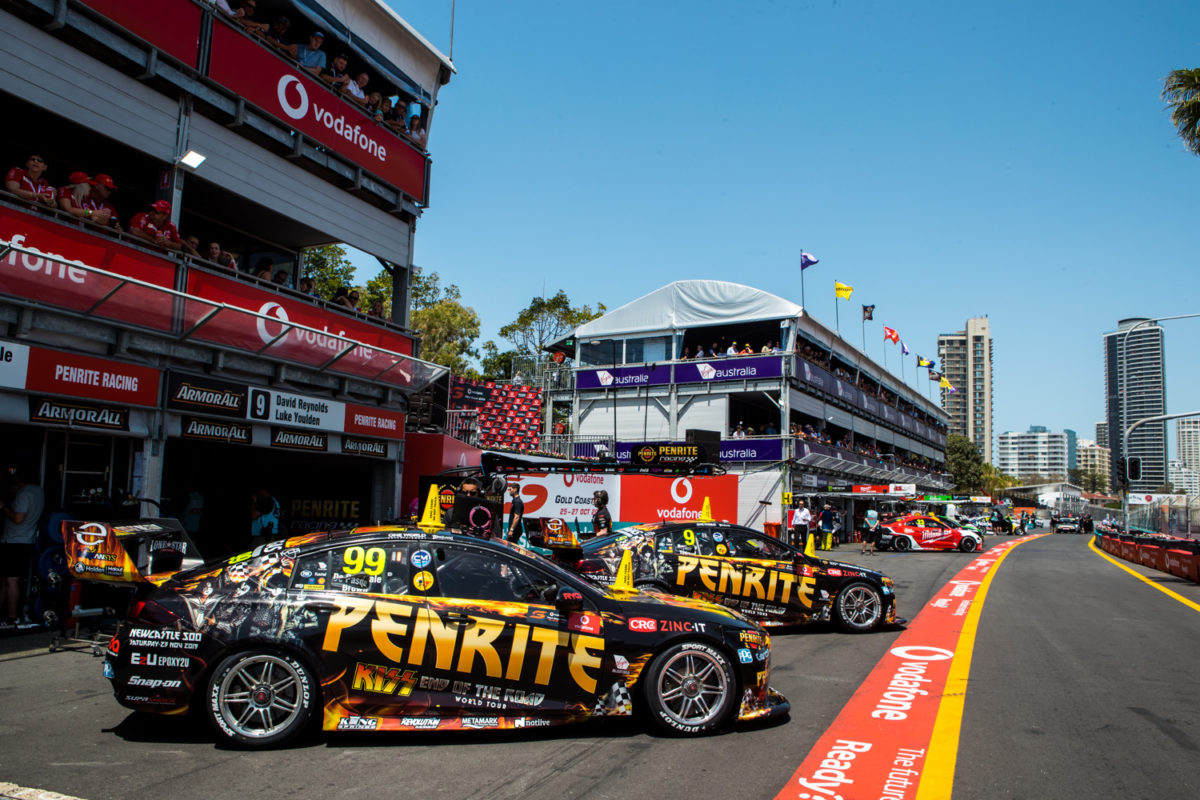 Penrite Racing boss Barry Ryan has hailed the team’s recovery at the Gold Coast having placed his drivers under strict orders to keep it clean in Race 27.

The Holden squad enjoyed one of its best showings at Surfers Paradise on Sunday as David Reynolds and Luke Youlden claimed third, while Anton De Pasquale and Will Brown recovered from being taken out on the opening lap to finish eighth.

Strong results arrived after Ryan had delivered stern warnings to all his drivers after a ‘pretty poor performance’ on Saturday that saw several unforced errors.

Luke Youlden damaged the splitter on the #9 Commodore by striking tyre bundles early in the race, before De Pasquale did the same to his car later in the race.

“It was good. We had a pretty poor performance yesterday so we had to turn around and we did,” Ryan told Speedcafe.com.

“Proud of the way the team worked together and (Sunday) was a big turnaround because (on Saturday) we were really bad.

“I guess that’s what makes a team, if you can go from a bad day to a good day.

“All day they (the drivers) were under pretty strict rules; damage the car, don’t come back to the garage.

“I think they were all very careful today. It shows that you don’t need to hit it to drive the car fast. Hitting it just damages the car and you can’t fix it.

“We’ve got to be happy with a podium and eighth for #99 was great because he got turned around by some loose cannon.

“Will drove a fantastic co-driver stint to make up a lot of time. I think we lost 35 seconds in the spin, then I think they were 40 seconds behind in the end.

“So they could have been just behind Dave, somewhere around there. It was really good.”

Youlden admitted post-race that he had Ryan’s warning ringing in his ears during the race.

However, helping Reynolds to bring the car home in third has proved a massive confidence booster having also made a crucial error at Bathurst two weeks prior.

“My confidence had taken a bit of a battering at Bathurst and also (Saturday), so (Race 27, Sunday) was exactly what I and the team needed. I have been driving OK, but things haven’t gone too well for me, so it was good to get that under my belt,” said Youlden.

“I had Barry’s voice in my head the whole race, ‘no kerb strikes and just try to keep it clean’.

“I could go faster but I just did my best to not make any mistakes, that’s what I needed to do to maintain the position we were in. To be able to bring it back in third was really good.

“Obviously, the car had really good pace, it’s a credit to the team to turn things around from yesterday.”

Meanwhile, De Pasquale was pleased to atone for his errors by helping complete an impressive recovery after Brown was spun on the opening lap.

“To be in the top 10 was a good starting point though Will got spun on the first lap which put us dead last and then he did a great job to hustle through and pass a lot of cars,” said De Pasquale.

“The boys did a good strategy too to bring me out in clean air.

“We had a fast car so we could move our way forward.

“To get back to eighth from last was a really good effort; it was good to recover from where we were, but we had a car that was good enough for a much better result.”