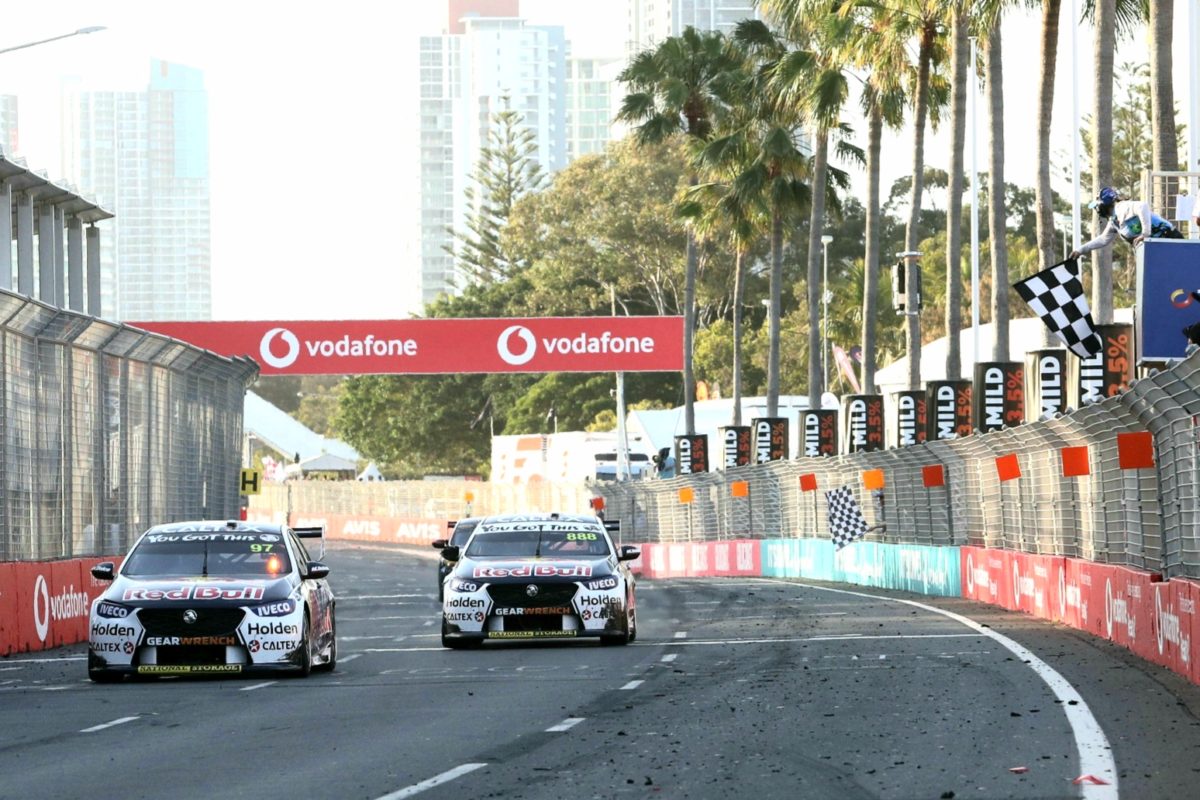 In a reversal of the quinella from Race 26, van Gisbergen was followed across the finish line by Whincup at a margin of 0.17s, while a threatening David Reynolds remained third at a further 0.67s behind in the #9 Penrite ZB Commodore which he shared with Luke Youlden.

Scott Pye/Warren Luff banked another solid result with fourth in the #2 Mobil 1 ZB Commodore, while the first of the Fords was Cameron Waters/Michael Caruso in the #6 Monster Energy Mustang in fifth.

Lowndes (#888 ZB Commodore) made a good start for the second day in a row and while he bested fellow Triple Eight co-driver Tander when the lights went out, he appeared to fan the throttle and file in behind the #97 ZB Commodore as they approached the front chicane.

Fabian Coulthard was one of few primary drivers to start and he jumped from 16th on the grid to ninth on Lap 1, thanks in part to a melee at Turn 11 triggered when Todd Hazelwood (#35 Unit ZB Commodore) came in hot and turned Will Brown (#99 Penrite ZB Commodore) around in the pack.

The gap between first and second position held at around one second throughout the opening stint, while Alex Davison appeared to be a slight impediment for Randle.

Coulthard remained stuck behind Caruso and making no advance on ninth position, but was also hamstrung by a lambda sensor problem in the #12 Shell V-Power Mustang.

They pitted together on Lap 22 and Car #12 was shut down as the DJR Team Penske crew attempted to address the problem.

However, that disabled the line locker and the wheels spun as Tony D’Alberto left the pit box after a driver change, which drew a 15-second time penalty.

Tander was about eight tenths up on Lowndes when he pitted on Lap 34 to hand over to van Gisbergen, who resumed over five seconds behind the #6 Mustang still piloted by Caruso.

Lowndes pressed on for three more laps before he pitted and made way for Whincup, who was about 3.5s adrift of van Gisbergen once he got up to speed in third position of those who had pitted.

While van Gisbergen and Whincup were generally matching each other’s pace in the opening stages of their first driving stints, they were each closing in on Caruso.

Van Gisbergen, with fresher tyres, was able to drive past the #6 Mustang as they sped down Gold Coast Highway at the end of Lap 50 and Whincup, who had by then been caught by Reynolds, made the same pass eight laps later.

By that point, van Gisbergen had moved his advantage past five seconds, while Reynolds dived past Caruso at Turn 11 on Lap 59.

Caruso kicked off the second pit stop cycle at the end of that lap when he finally vacated the cabin of Car #6 for primary driver Waters.

Whincup had brought van Gisbergen’s lead back under five seconds when the New Zealander pitted on Lap 63, before D’Alberto filed into the lane from third position, at which time Coulthard had to serve the hold penalty before resuming.

Despite running deeper into the stint, Whincup was still making good time at the head of the field and when he took service on Lap 75, he rejoined just behind van Gisbergen, to whom he had handed back the race lead.

At that point, with the pit cycle complete, Reynolds sat third at about 4.5s off the lead, Waters was fourth, and Pye was fifth.

The rest of the top 10 was Holdsworth, Will Davision, De Pasquale, James Courtney (#22 ZB Commodore), and Garry Jacobson (#3 Altima).

Van Gisbergen stretched the lead to 1.25s at the end of Whincup’s out lap, and the latter had only made up a few tenths until van Gisbergen appeared to be hindered slightly by traffic on Lap 88.

Once they had cleared the #35 Matt Stone Racing entry, van Gisbergen was able to restore the eight-tenth margin which he had enjoyed, until Whincup got back to half a second behind on Lap 97.

Whincup got extremely close on Lap 99 and again on the 102nd and final lap before crossing the finish line just behind Car #97.

“Our cars were good, it would have been good to fight Scotty again but it’s a shame that wasn’t to be,” said van Gisbergen, who is now 463 points behind championship leader Scott McLaughlin.

“It was harder then, we had the short tyre strategy so had to run them long at the end. I was struggling a little bit but trying to manage and then Dave put the pressure on us, had to speed up again.

“What an awesome weekend, two one-twos for Red Bull Holden Racing Team, really special to be a part of it.”

Reynolds was more than three seconds behind Whincup when the latter started his final stint but gnawed at that deficit and made himself something of a threat before taking the chequered flag in third.

Pye was a distant fourth, over 14 seconds behind the winners, ahead of Waters, Holdsworth, and Will Davison.

Coulthard passed Jacobson at the Turn 4 hairpin on Lap 79 and remained 11th thereafter, while the 2016 Super2 Series winner and co-driver Fiore finished one position behind in the lead Nissan.

The only retirement from Race 27 was the #34 Boost Mobile ZB Commodore of James Golding and Richard Muscat after the latter was caught up in the Turn 11 carnage on Lap 1.

The next event is the Penrite Oil Sandown 500, which will close out the Pirtek Enduro Cup, on November 8-10.