Van Gisbergen beats Whincup to pole in Shootout for Race 27

Van Gisbergen beats Whincup to pole in Shootout for Race 27 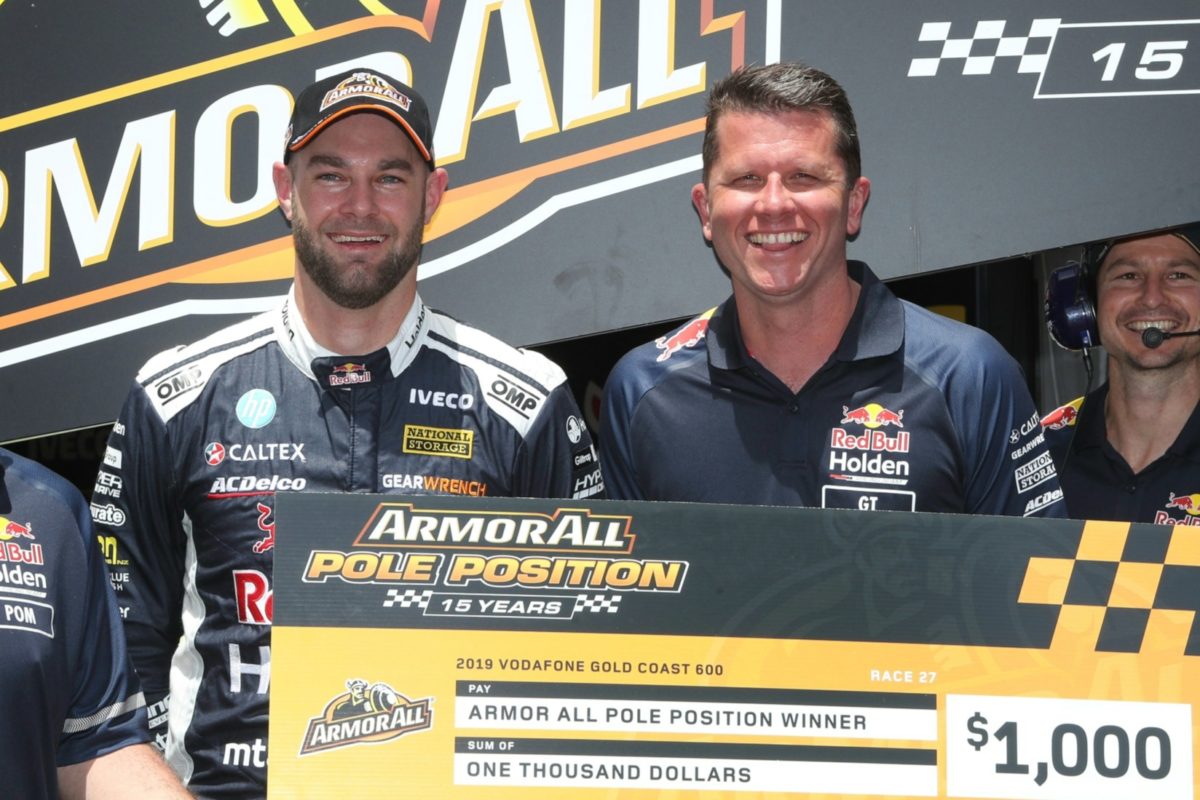 Shane van Gisbergen has taken Armor All Pole Position after he and Triple Eight team-mate Jamie Whincup went one-two in the Top 10 Shootout for Race 27 on the Gold Coast.

In what was actually a top nine shootout due to the absence of Scott McLaughlin after his massive qualifying crash, van Gisbergen was last man out and set a 1:10.2082s with roaded tyres on the #97 Red Bull HRT ZB Commodore despite a slight rear lock-up into Turn 11.

That effort beat the 1:10.4293s which Whincup had set immediately prior in the #888 ZB Commodore, the seven-time Supercars champion having also had a nervy moment entering Breaker Street when he kissed the wall.

“We’ve had an awesome car on old tyres all weekend; struggled yesterday in qualifying, but super fast in the race,” said van Gisbergen.

“Guys have done a great job here so thanks to the team tuning it up in qualifying.

“Hopefully we have a good race and stay out of trouble.”

Will Davison, with roaded front tyres on the #23 Milwaukee Mustang, put in a speedy middle sector to go top for a period of time on a 1:10.5182s which was ultimately third fastest.

David Reynolds was the biggest mover having driven the #9 Penrite ZB Commodore to a 1:10.6461s, which elevated him from a provisional ninth to fourth on the starting grid for the second race of the Vodafone Gold Coast 600 weekend.

Lee Holdsworth used four roaded tyres on the #5 The Bottle-O Mustang to set a 1:10.7006s, which put him fifth.

James Courtney, who provisionally qualified eighth, leapt up onto two wheels through the Beach Chicane on his way to a 1:10.7184s in the #22 Mobil 1 ZB Commodore.

His team-mate, Scott Pye (#2 ZB Commodore), who had to restart his shootout run due to a misplaced tyre bundle, arguably beat Courtney’s motorbike effort through that complex as he clocked a 1:11.3334s.

Cameron Waters (#6 Monster Energy Mustang) was the reason for the red flag which delayed Pye.

The Tickford Racing driver provisionally qualified fifth but is set to start eighth after grabbing too much of the third kerb through the Beach Chicane and straight-lining the rest of it.

Anton De Pasquale (#99 Penrite ZB Commodore), who was first onto the race track, took a more conventional line through the same complex of corners but still incurred a kerb strike and will therefore start ninth.