Crick wins amid mayhem in SuperUtes Race 2 at GC

Crick wins amid mayhem in SuperUtes Race 2 at GC 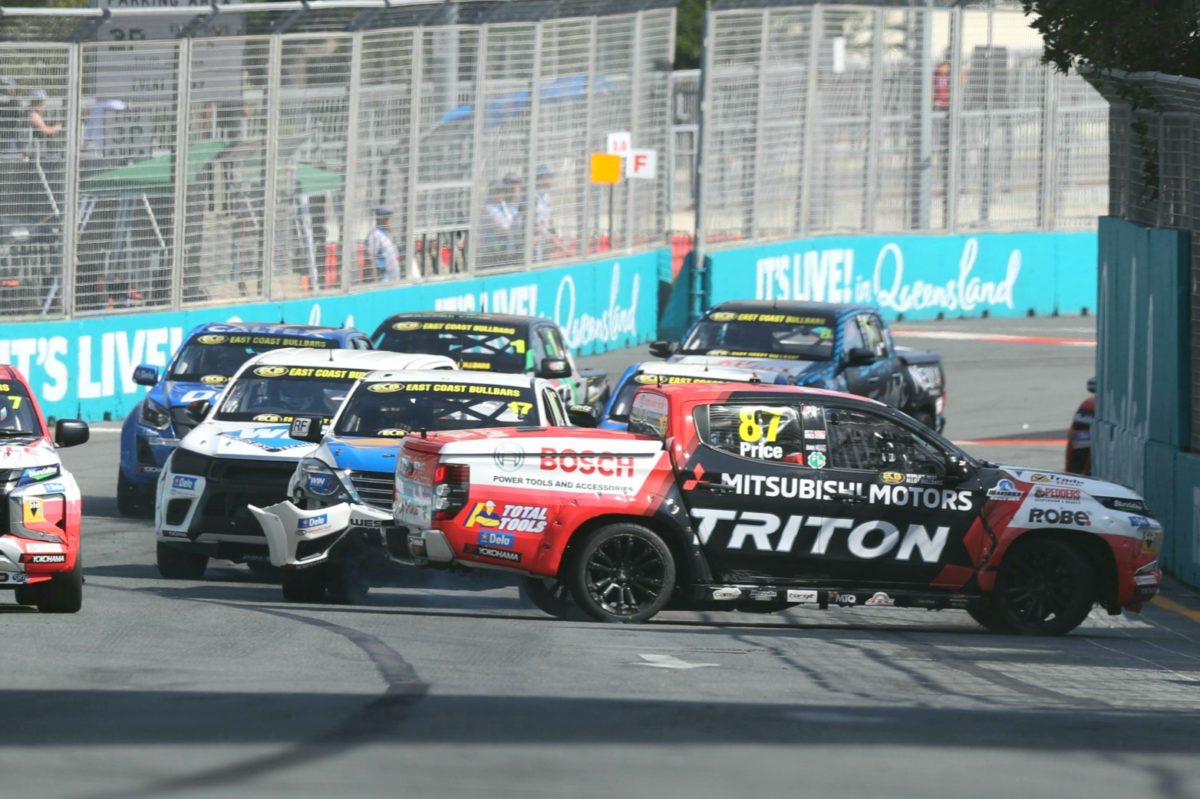 Cameron Crick has won ECB SuperUtes Series Race 2 on the Gold Coast in which more than half the field were caught in a string of incidents.

The Sieders Racing Team Triton driver survived a late charge by Ryal Harris, who broke the lap record on the final lap in his Peters Motorsport Mazda BT-50, to win the reverse grid affair by 0.1684s.

Toby Price led the field away while fellow front row starter Jaiden Maggs (Western Sydney Motorsport Toyota Hilux) was passed on either side.

Ben Falk (Peters BT-50) went for a dive for first position into the opening chicane, which saw him three-wide with both the factory-supported Mitsubishis of Price and Crick.

Falk tagged Price on exit, turning the #87 Triton into the inside wall, before Falk himself spun as a result of contact from Gerard Maggs at the hairpin.

Gerard Maggs then understeered into the wall at Turn 11, at the other end of the beach, which saw Ben Walsh (WSM Hilux) plough into the barriers next to him and Craig Woods (WSM Hilux) shunt into the originally stricken Sieders Racing Team Hilux.

A Safety Car was called and the race restarted on Lap 5 of eight, at which time series leader Tom Alexander (Ross Stone Racing Isuzu D-Max) immediately passed Jaiden Maggs to take up second position, behind Crick.

Harris got Jaiden Maggs at the hairpin, seconds later, and dived to the outside of Alexander at the final complex of corners on that same lap.

The drag race was resolved in the favour of the former by the time they got back to the front chicane, as Crick pulled more than three seconds clear.

However, Harris reeled him in and they were nose-to-tail at the finish, while Alexander took the chequered flag over six seconds back in third position.

There was more carnage when Christopher Formosa appeared to move across on Falk in the braking zone for Turn 12 on Lap 7, which saw the Allgate Ford Ranger turned into the wall.

Jaiden Maggs, who had been holding that pair up, got home in fourth, ahead of Falk, Walsh, and Formosa.