The #888 ZB Commodore effectively led all 102 laps as Whincup saw off late pressure from team-mate Shane van Gisbergen, who converted a solid opening stint from Garth Tander into a runner-up finish in the #97 ZB Commodore.

Scott McLaughlin, who chose not to fight van Gisbergen for second when he was challenged at the end of Lap 88, holds a slightly reduced 613-point championship lead over his compatriot after he and Alexandre Premat took third in the #17 Shell V-Power Mustang.

Lowndes got the jump on Premat from the outside of the front row and took a clear lead to the first corner, as Tander slotted into third and Thomas Randle (#5 The Bottle-O Mustang) into fourth.

Lowndes got as far as 1.3s ahead on Lap 3 before Premat began to nibble at the margin, which then oscillated around one second for the next dozen laps.

While the front-runners had run largely as you were since the start of the race, Jack Perkins (#22 Mobil 1 ZB Commodore) incurred a 15-second hold penalty after he dived at Tony D’Alberto in a bid to take eighth and clattered into the side of the #12 Shell V-Power Mustang at Turn 11 on Lap 8.

Randle, meanwhile, was holding up Tickford Racing team-mate Caruso such that the latter was more than nine seconds adrift of Tander when the rookie appeared to give fourth position up at Turn 11 on Lap 13.

Car #17 was reportedly given a warning for kerb hops around the Lap 16 mark, which coincided with the beginning of an expansion of the gap between Lowndes and Premat.

The bad sportsmanship flag was officially issued to Car #17 on Lap 24, by which time Lowndes was almost three seconds up the road and still pulling away.

The gap was approaching six seconds when both filed into pit lane at the end of Lap 34, the minimum lap requirement for either driver, as did several others.

Whincup climbed into #888 and McLaughlin into #17 and they resumed with about the same split between them, while Tander pressed on until Lap 37, when he handed over to van Gisbergen.

McLaughlin began to make an impression on Whincup’s lead, bringing it down towards three seconds as the Triple Eight Race Engineering driver had to dispose of lapped traffic.

Once the DJR Team Penske driver came up on the back-markers, however, that gap blew back out beyond seven seconds on Lap 52.

By then, Pye was fifth, having executed strong passes on De Pasquale and then Heimgartner at the Turn 4 Hairpin, before getting by team-mate Perkins, in the space of three laps.

Perkins, who had pitted early to clear the hold penalty, was himself holding up Heimgartner, Lee Holdsworth (#5 Mustang), and De Pasquale until he pitted at the end of Lap 58 with close to 11 seconds between the two Walkinshaw Andretti United entries.

McLaughlin was back to about six seconds off the lead when he pitted again on Lap 61, and about 3.5s behind Whincup when #888 rejoined from the lane a lap later.

Van Gisbergen, who was given greens on the working side for his first driving stint, continued to make time on McLaughlin as he pressed on as the official race leader.

Car #97 looked a threat for second position then and there, until the momentum started to reverse not far past the Lap 70 mark.

When van Gisbergen finally did make another pit stop on Lap 76, he rejoined a clear third.

McLaughlin had chipped his deficit to Whincup down to about 2.3s, and had over five seconds of margin on van Gisbergen, while fourth through 10th at that point was Waters, Pye, Holdsworth, Will Davison (#23 Milwaukee Mustang), Heimgartner, De Pasquale, and Nick Percat (#8 Alliance ZB Commodore).

Van Gisbergen, however, had new tyres down the right of #97 again and he was within a second of McLaughlin on Lap 87, with Whincup three seconds clear.

McLaughlin gave up second position at the start of Lap 89 when van Gisbergen pulled alongside on the Gold Coast Highway after the Ford driver had been held up by traffic at the final corner.

A Safety Car was called on that same lap due to the presence of a muffler, which fell off the #3 Rabble.Club Altima, at the exit of the Turn 4 Hairpin, erasing Whincup’s 3.2s lead.

When the restart came on Lap 93, the Triple Eight cars were almost 0.9s up on McLaughlin, with van Gisbergen then nearly 1.4s ahead of the championship leader by the end of that lap.

Van Gisbergen tailed Whincup until Lap 99, when he appeared to settle for second, and while McLaughlin had Waters close behind for the final laps, there seemed no major challenge.

“Big thanks to CL, did an amazing job to get us into the lead of the race, a nice buffer,” said Whincup.

“I thought we were in a little bit of trouble there with that late Safety Car.

“We had some pace, happy days, couldn’t be happier.”

“We didn’t get out the old 10-year ago logbook of how to win races (together with Lowndes); the sport’s moved forward since then. CL did an awesome job, couldn’t be happier.”

Lowndes added, “The car was great, it was consistent, I ran to a number; Alex sort of put a bit of pressure early on and then we sort of see-sawed a bit but in the end we were able to drive away from him and get Jamie a five-second lead.

“Credit to the team, to have both cars one-two is really a credit to everyone.”

Pye and Luff earned fifth after the latter made good progress in the first stint of the race and the former during the second, while Holdsworth/Randle finished sixth, and Will Davison/Alex Davison seventh. 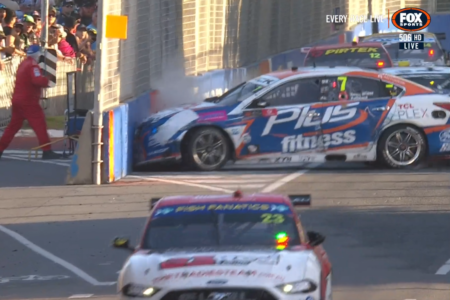 There was more carnage on Lap 98 as James Courtney, who had pitted under the Safety Car and was on fresh tyres, attacked Heimgartner for eighth position.

He gave Heimgartner a nudge coming off the Turn 4 hairpin, then tagged the rear of the #7 Altima and turned it into the wall as they accelerated alongside the beach.

Heimgartner got back to the pits, where he retired, while Courtney was soon issued a drive-through penalty and ultimately finished 12th.

De Pasquale brought a wounded Car #99 home in 11th for himself and co-driver Will Brown despite a late hit with the wall at Turn 11.

The Erebus Motorsport driver already had a munching front splitter when he failed to make the turn onto Breaker Street on Lap 101, but only lost two positions for his troubles.

The next Supercars session on the Surfers Paradise Street Circuit is Armor All Qualifying for Race 27, tomorrow at 0955 local time/1055 AEDT.