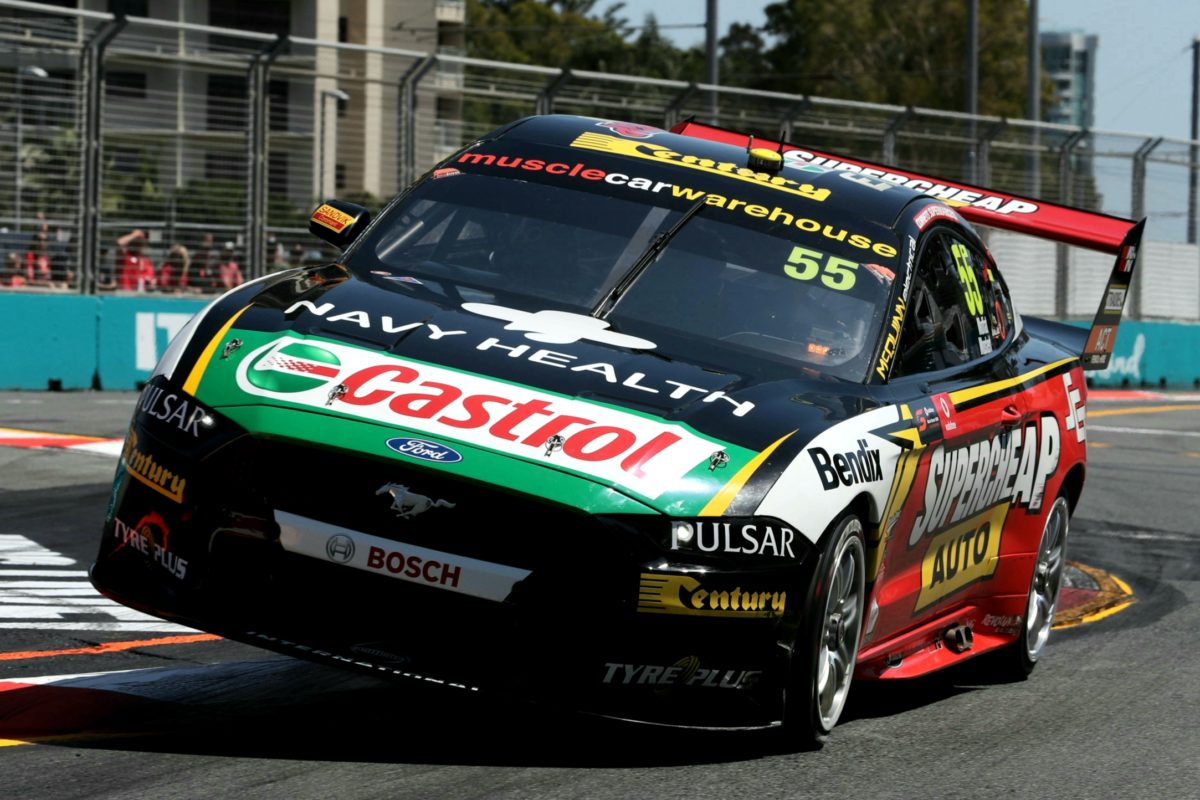 Chaz Mostert has provisionally qualified on Armor All Pole Position for Race 26 of the Virgin Australia Supercars Championship on the Gold Coast.

Mostert lifted himself clear of the danger zone with a 1:10.4279s with the chequered flag out which usurped previous fast man Shane van Gisbergen by just 0.0370s.

As such, the #55 Supercheap Auto Mustang will be last out in the Armor All Top 10 Shootout which follows, as will both Red Bull Holden Racing Team entries, both Shell V-Power Racing entries, and Tickford Racing’s other two own entries.

The Red Bull HRT duo of van Gisbergen and Jamie Whincup caught the tail of the field on their first timed laps but they were not on green tyres anyway and chose to pit.

Despite the traffic, they also managed to step aside such that Scott McLaughlin could thread his way through and establish the early benchmark at 1:10.5190s.

In what set the tone for a ragged session for the championship leader, the #17 Shell V-Power Mustang had a significant rub of the wall at the first chicane, as soon as McLaughlin had completed that flying lap.

On his second run, he bumped the wall at the Beach Chicane and while he did not improve during that outing, Whincup moved to 0.0637s behind in second position having had new tyres bolted onto the #888 ZB Commodore.

Lee Holdsworth improved to third in the #5 The Bottle-O Mustang, with David Reynolds (#9 Penrite ZB Commodore) fourth, Mostert fifth, and van Gisbergen (#97 ZB Commodore) ninth ahead of the final runs.

Andre Heimgartner went early and temporarily put the #7 Plus Fitness Altima into fourth position, which was the only change at the pointy end of the field before the chequered flag came out.

McLaughlin continued to rack up cut-throughs, ultimately incurring six of those and one kerb strike in 20 minutes of qualifying.

He could not beat his first flyer but van Gisbergen and then Mostert could, leaving Car #17 third on the timing screen at the end of proceedings.

“Tough session, so tight out there, so really glad to get that last lap in,” said Mostert.

“(I) Left nothing on the table. It was probably millimetres away from triggering sensors but that’s what it takes around here.

“Super happy to get into the (top) 10; to be the last car out is more pressure but when you qualify like that in the session you wish there was no top 10.

“It’s obviously got a bit of pace; I’m probably more happy with our heavier full tank car than what I am (with the) light car. To do that, pretty happy.”

McLaughlin said of his challenging showing, “I’m trying to drive to a track number that probably isn’t quite there.

“We think the track’s a lot faster than what it actually is, but it’s actually not, so you’ve sort of just got to bring it back a bit, but you sort of rely on a bit going on.

“We’ll sort it out; we’ve got a really fast car. That first lap, I couldn’t believe it stuck as my fastest for so long.

“There was no grip out there. It was just a bit of push here, a bit of oversteer there and I had a big push through the beach chicane.

“I think we had that late night (practice session) last night where we get all excited with the grip out there and then you come out this morning and it’s all sort of gone away, and it surprises a few.”

Whincup ended up fourth having also not gone faster on his final run, while Holdsworth consolidated fifth position at the end.

The jostling for the final berths in the Shootout saw Scott Pye move from 17th to 10th, which knocked Fabian Coulthard out of the top 10.

However, the #12 Mustang was still on its final lap and Coulthard returned the favour by rebounding five spots to get to sixth, before Cameron Waters (#6 Monster Energy Mustang) made himself safe by improving from 10th to sixth.

Results: Armor All Qualifying for Race 26