McLaughlin takes pole as Mostert crashes out of Shootout

McLaughlin takes pole as Mostert crashes out of Shootout 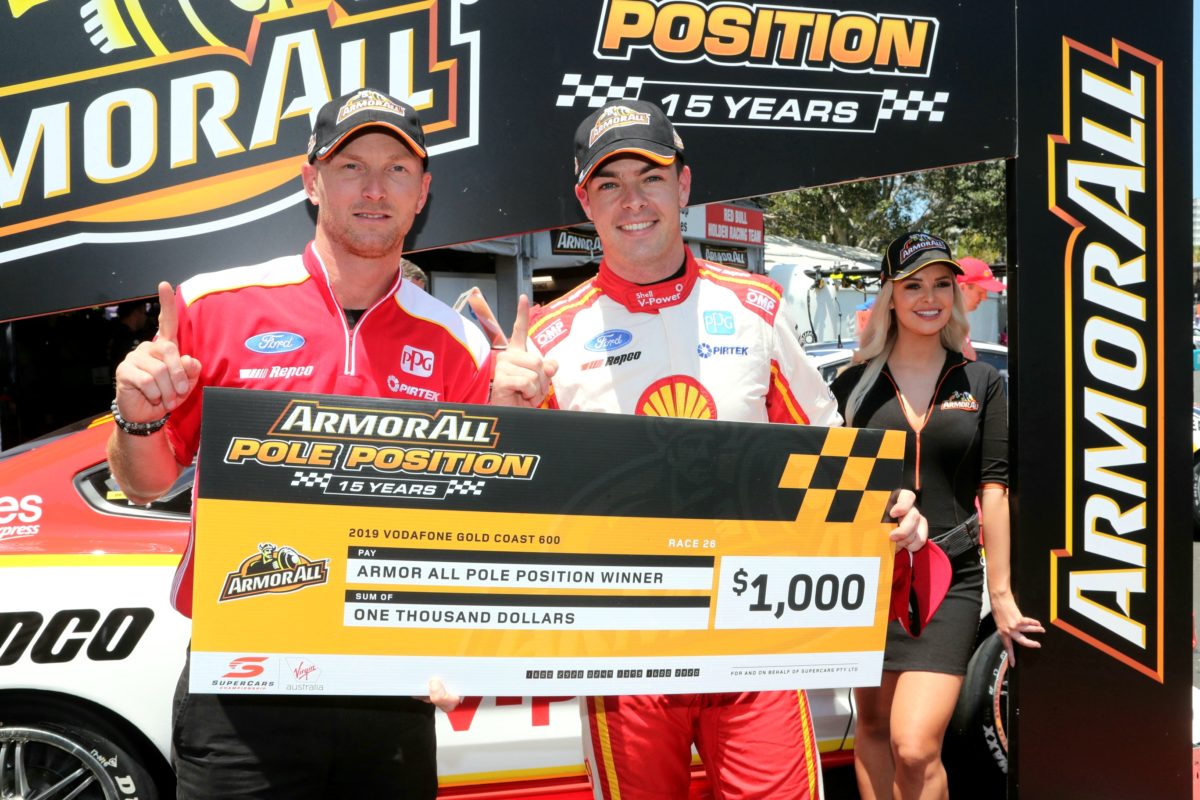 Scott McLaughlin claimed Armor All Pole Position for the opening race at the Vodafone Gold Coast 600 after a dominant lap in the Top 10 Shootout.

Third fastest in the morning’s qualifying session, the Shell V-Power Mustang entry proved fastest through all three sectors to take provisional pole ahead of Jamie Whincup.

Next out, Shane van Gisbergen was unable to better McLaughlin’s effort before Mostert fired it into the wall to end his lap at Turn 11.

“Just had to have a big think about it and just realised ‘stop over driving it’,” said McLaughlin, who was only seventh fastest after Friday’s practice sessions.

“Glad Chaz is alright, that was a big lick so hope the team can get back out there.

“Stoked for our team, the car has been good all weekend.

“I’ve just been driving pretty bad, so I just need to get sorted and we’ll be alright.”

James Courtney’s lap was immediately scrubbed as he triggered the sensor in the kerb at the opening chicane.

It saw the Walkinshaw Andretti United driver, who was the first on track in the Shootout, promptly abandon his lap to confirm the car he shares with Jack Perkins to 10th on the starting grid.

Reynolds was therefore the first to set a time, a 1:10.959s the result for the Erebus driver after missing the apex at Turn 4.

A brush with the wall at Turn 3 for Andre Heimgartner left the Nissan Altima battle scarred, the impact enough to pluck the driver side window out of the door frame.

It cost the Kiwi two tenths to Reynolds through the first split, but he made time through the middle of the lap.

He then brushed the wall again when exiting the final turn to ultimately fall a tenth shy of Reynolds with 1:11.0335s.

Fabian Coulthard escaped the first sector without drama, setting the fastest split through the opening third of the lap.

The DJR Team Penske driver then flew high through the beach chicane, stopping the watches at 1:10.7531s to move to the top of the timesheets.

Cameron Waters couldn’t match Coulthard through to the opening split but found some four tenths through the middle phase of the lap.

A tidy end to the lap also proved rapid, the Monster Energy Mustang quickest with 1:10.4147s to be provisionally on pole.

Steady through the front chicane, Lee Holdsworth was almost half a second off the ultimate pace to the first split.

An aggressive run through the beach chicane for the Bottle-O entry clawed back some time with a strong final sector enough to slot him in between Waters and Coulthard into second place.

He went on to claim provisional pole, courtesy of having turned in the fastest sector times at all three splits to set a 1:10.2581s.

McLaughin was immediately on the pace, bettering Whincup’s first split before hustling the Shell V-Power Mustang through the back chicane.

It was enough to move the marker on at the second split, holding a more than two tenth advantage midway around the lap.

The penultimate runner, van Gisbergen, gave up a tenth in the first split with a conservative run through the front chicane.

Though he found some time through the middle of the lap, which included brushing the tyre bundles at the beach chicane, van Gisbergen could manage no better than third best. 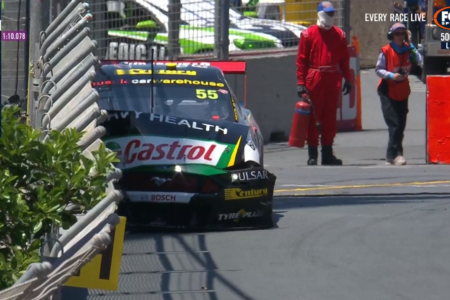 His lap came to an abrupt and violent end when he tagged the wall at Turn 11, turning into Breaker Street, firing himself heavily into the outside wall.

The car suffered heavy damage to the front right, and resigned that #55 entry to ninth, alongside the Courtney/Perkins entry.

Unable to complete the lap, it confirmed McLaughlin and Premat on pole ahead of Whincup and Craig Lowndes at the conclusion of the session.