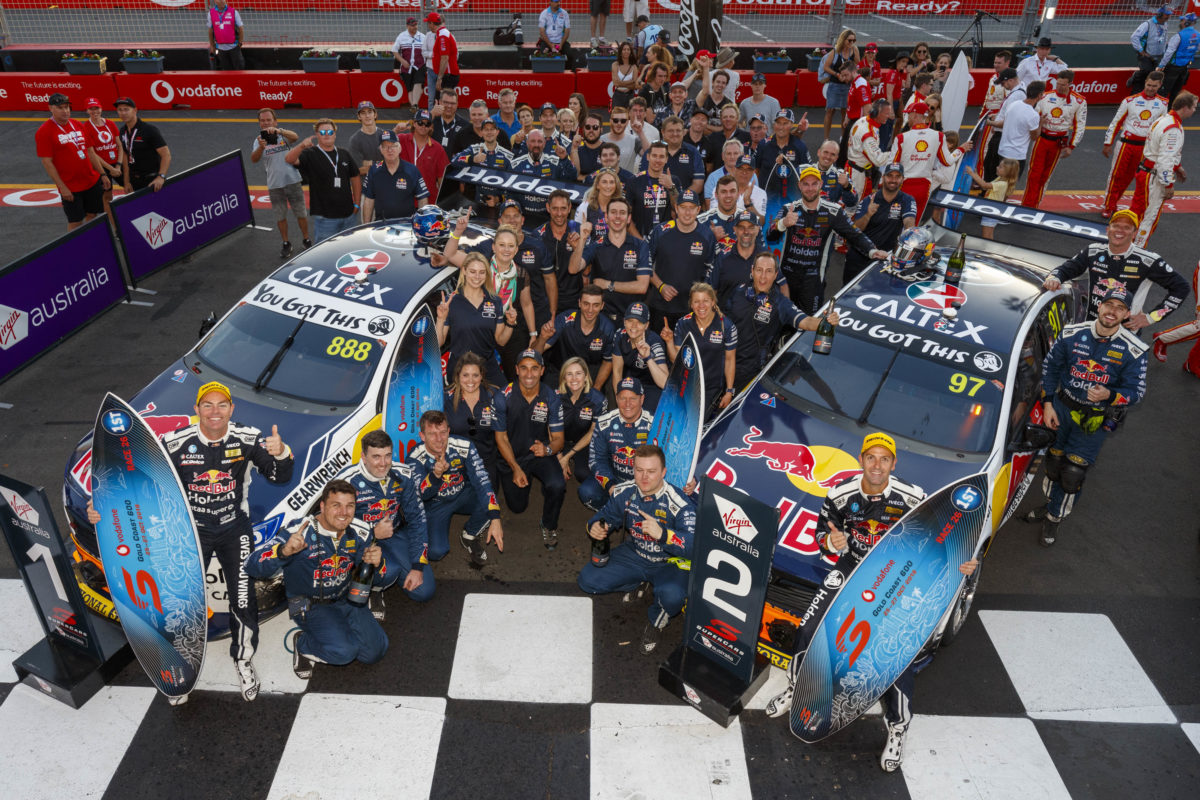 Triple Eight team manager Mark Dutton is proud of the team’s one-two at the Vodafone Gold Coast 600 given it arrived after a ‘hectic’ week of challenging circumstances.

It was the outfit’s first one-two since last year’s Sandown 500.

While the team executed faultlessly to manage a form finish, Dutton revealed the squad has faced an eventful lead-up prior to the victory.

During the event, the team has seen two of its mechanics required to leave and return to the venue.

Jason Briggs injured his finger while number one mechanic Jarrad Farrell on the #97 left the circuit to attend the birth of his child before coming back to assist the squad in today’s triumph.

In addition to that, van Gisbergen’s data engineer Martin Short is also absent due to personal reasons.

“It’s pretty sad, I don’t remember when our last one (one-two) was.

“We’ve been working hard for a long time to get that. (I’m) very proud of the whole team.

“We’ve had people getting injured and going off to have babies and coming back and that, so we’ve had a pretty hectic week so far. (I’m) really proud of them.

“One of our guys got his finger (injured on) Thursday… but Jarrad had to duck away to have a baby with his missus, but he’s come back. (That’s) massive commitment.

“The cars rolled out of the trucks really well.

“The prep by the engineers, the drivers, the full crew, that set us up for a good weekend.

“Then drivers keeping it off the walls – it sounds obvious but it’s quite difficult to do around here – you’re trying to find the limits.

“The lead-up it gives you by not overworking the crew by staying late fixing stuff, drivers not losing their confidence, that leads up – good qualifying and shootout effort and the amazing start from Craig. That was a cracker.

“We’ll still analyse because we never do everything perfect, obviously, even when you get a one-two, but (I’m) very happy.”

Dutton confirmed post-race that the team did manage the result at the end by instructing a charging van Gisbergen to hold station behind Whincup.

“It was tactics at the end. If we let them race each other then we would look like absolute idiots if, while they’re busy racing each other, we expose ourselves to the cars behind,” Dutton added.

“The fact that we managed to get the one-two, there’s all sorts of comments you can make – should have done this, should have done that – for us it was a tactical decision to work together to make sure you could gap the threats from behind because there was still some very fast cars.

“There were cars on fresher tyres, but they were a little while back.

“We were working together as a team. It was a tactical decision to work together for sure.”

When asked about the team orders instruction van Gisbergen said, “Well initially it was a stink but it’s more important, one-two for the team and seeing everyone at the podium, it was well worth it.

“I’m a team player, that will pay back one day as well. It’s all worth it.”

The result has seen Triple Eight close the gap in the teams’ championship to Shell V-Power Racing to 342 points.