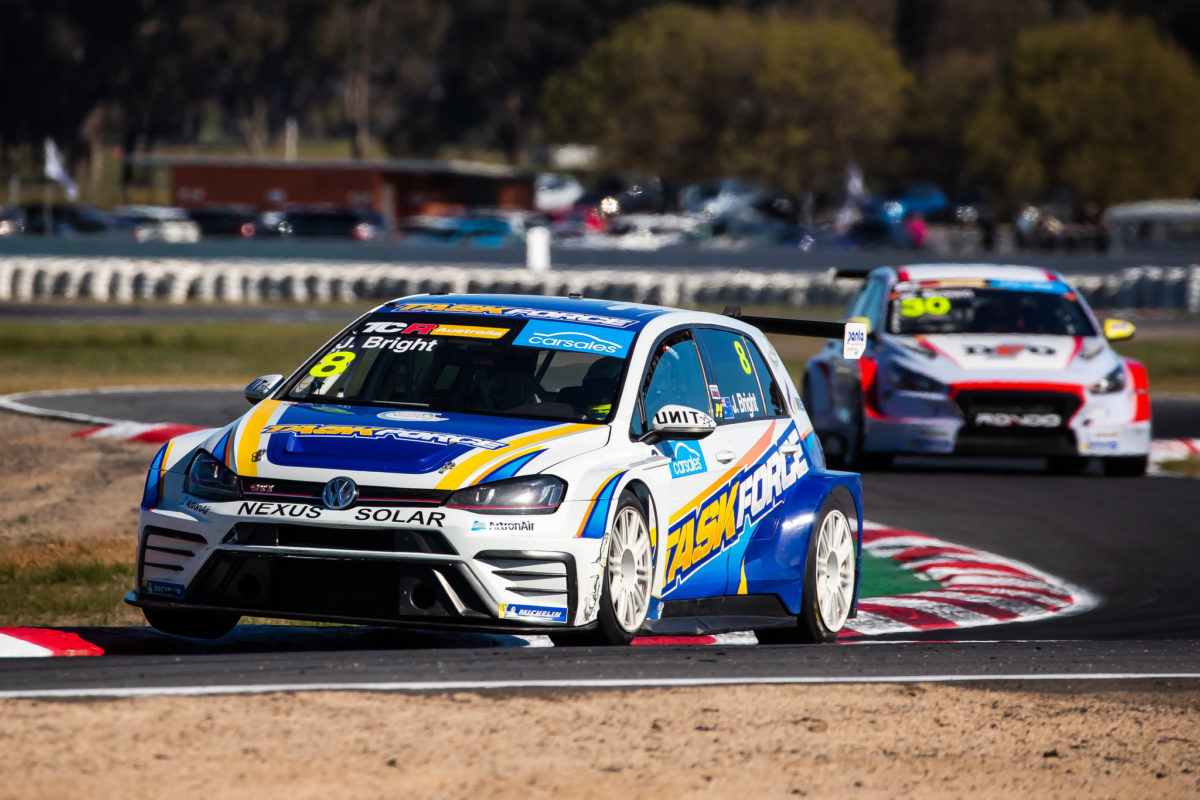 Jason Bright is keen to expand his involvement in the TCR Australia series by running as many as four cars next year.

Bright currently fields two Volkswagen Golfs in the front-wheel-drive touring car competition, one for himself and another in the hands of Alexandra Whitley.

Initially fielded by Matt Stone Racing, the cars were switched to the Melbourne Performance Centre before the most recent round at Sandown.

MPC has run its own VW Golf for Aaron Cameron, alongside three Audi RS 3s.

Having purchased his existing cars out of Asia, Bright is now toying with the prospect of adding two more to his fleet as interest in the series grows.

“I’ve had interest from all different directions at the moment, as far as drivers and people outside of TCR at the moment, that are at it going ‘how can I get involved, in an either sponsorship way, or possibly bringing more cars in,” Bright told Speedcafe.com.

“As far as what I’ve locked in, absolutely nothing. I haven’t sat down with enough of them yet, but there’s certainly the interest there which is good.

“I think there’s certainly still a potential of four cars,” he added.

“That’s where I’d like to see it get to. I think there’s enough drivers out there interested at the moment.

“The good thing is we’ve had some good performances.

“Unfortunately, we’ve had a couple of rounds where we struggled a little bit, but I think we’ve at least proven that the Volkswagen is a good package, and it can win races.”

After victory at the opening race of the year in Sydney, Bright’s own season has been somewhat up and down.

There was another win at Winton, where he also banked a second place in Race 2 of the weekend, but four retirements and a smattering of finishes outside the top 10 have hurt his series quest.

Added into the mix has been a switch from MSR to MPC ahead of the Sandown round, making it difficult to gauge exactly where the squad is at.

“This year’s been a little bit difficult to prove,” he reasoned.

“This year we’ve just done it very modestly to get a feel for the category.

“But I think, next year, I’d like to have a really good crack at it, and with the right drivers and funding, I think we can put something together really, really good.”

That could see it move away from MPC and run under its own banner, though Bright says no decision has been made.

“All options are on the table,” he said.

“They (MPC) run a really professional outfit, so I’ll have no qualms staying there, but it just depends on what happens with other things.

“There’s other people talking at the moment, that have got aspirations to help set up something that’s external to that, but I’m not rushing into that unless it’s the right

“(MPC) run a really good shop. It looks professional, looks like the sort of team that manufacturers want to get involved with obviously, and that’s what’s important.”

TCR Australia remains the only series in which Bright now holds an interest, having offloaded his Supercars Racing Entitlements Contract which had been leased by Matt Stone Racing this year.

Though unconfirmed, it’s believed Bright’s REC was purchased by the Smith family, which will see Jack Smith compete out of the Brad Jones Racing stable in 2020.

The final round of the TCR Australia Series takes place at The Bend Motorsport Park next month.