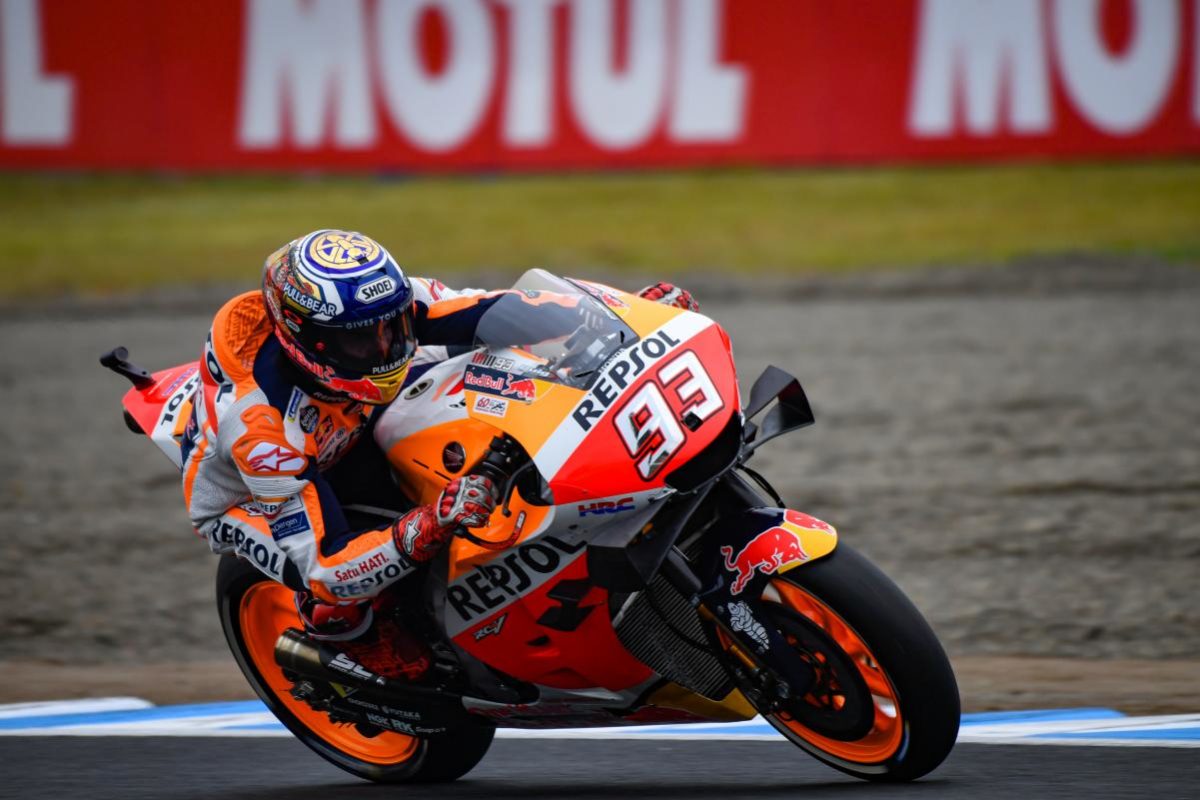 Marc Marquez has eased to victory in the Japanese MotoGP, helping Honda to seal the constructors’ championship at its home circuit of Motegi.

Petronas SRT Yamaha’s Fabio Quartararo went with the recently crowned world champion early on but faced a late threat from the Ducati Team’s Andrea Dovizioso before they took the chequered flag in second and third respectively.

Pramac Ducati’s Jack Miller held a podium position for almost 10 laps but ultimately faded to 10th, while Jorge Lorenzo finished all the way back in 17th on the second Repsol Honda.

Quartararo passed Marquez at Turn 7 but nearly went down when the Honda rider reclaimed the spot at Turn 10 on the opening lap.

That moment forced Miller to slow and he was passed by Morbidelli, who had dropped as far as sixth, at Turn 11, as Dovizioso ran fifth.

Miller took three attempts to re-pass Morbidelli on Lap 3 and he was left alone for several laps as the Italian came under pressure from compatriot Dovizioso and Maverick Viñales.

Morbidelli shut the door on Dovizioso at Turn 1 on Lap 10 and got himself back into third spot when Miller left a big opening on the inside, eight corners later.

That was when the Australian, who had selected soft compound Michelin tyres on the front and rear, began to haemorrhage pace and he was passed by both Dovizioso and Viñales on Lap 11.

Quartararo, meanwhile, had managed to stay about a second behind Marquez until the Repsol Honda rider put the hammer down at about the same time.

He extended his advantage beyond two seconds on Lap 13, while Dovizioso got by Morbidelli at Turn 11 on Lap 14.

Viñales, too, went by #21 at the start of Lap 16 and the Monster Energy Yamaha rider became a serious threat to Dovizioso’s hopes of a podium.

Dovizioso was able to hold the M1 at bay through the corners, with Viñales particularly strong through Turn 7, and had seen off the challenge with a couple of laps to go.

The Ducati pilot started to reel in Quartararo, starting the 24th and final lap 0.882s behind the rookie, but ran out of laps.

Marquez eased off but still won for the 54th time in the premier class, drawing level with another multiple world champion for Honda in Mick Doohan, by 0.870s.

Quartararo put the Rookie of the Year title beyond doubt by finishing 0.455s up on Dovizioso, who consolidated second position in the standings at 55 points clear of Alex Rins and Viñales.

Valentino Rossi was just outside the top 10 when he lost the front end of his Monster Energy Yamaha at Turn 1 on Lap 21, making for two DNFs after Andrea Iannone (Gresini Aprilia) also crashed out.

Tito Rabat (Reale Avinitia Ducati) was a non-starter after a crash in practice the day prior, having also sat out qualifying.

Round 17 is the Pramac Generac Australian Motorcycle Grand Prix at the Phillip Island Grand Prix Circuit, for which practice starts this Friday, October 25.