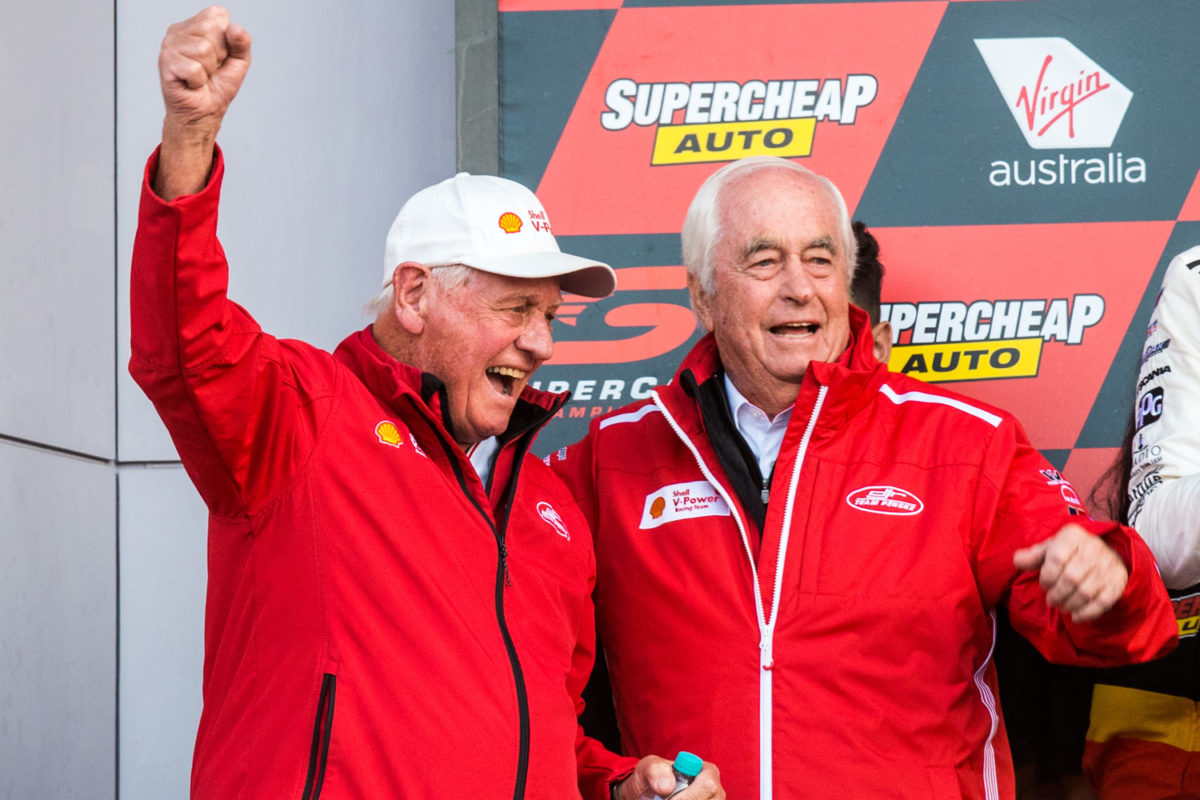 Sunday’s triumph at Mount Panorama ended a 25-year drought for Johnson, a three-time winner of the Great Race as a driver and team owner, with the last of those arriving back in 1994.

After a quarter of a century of disappointment at Bathurst, Johnson was able to witness McLaughlin and Premat conquer the mountain, doing so alongside fellow motorsport great Penske, who has been instrumental in bringing the glory days back for the Queensland outfit.

The victory is the first for the squad at Mount Panorama since Penske purchased a 51 percent stake in the outfit in late 2014 to create the now powerhouse DJR Team Penske.

In the wake of the weekend’s win, American racing giant Penske paid tribute to Johnson while ranking the win among successes at the Indianapolis 500 and Daytona 500.

The pair joined McLaughlin and Premat on the famous Bathurst podium to celebrate the victory.

“Quite honestly, the win is really for him (Dick Johnson),” Penske told Speedcafe.com.

“What he’s done and the fact we could really partner with him has made a big difference because he’s brought a lot of charisma, a lot of history and a lot of support to the team since we jumped together here a few years ago.

“It’s a great partnership; Ryan Story obviously has been a big part of our success and just the whole team — so what can I say?

“Dick, 25 years ago he was standing up there and he stood up there again so the partnership is fine.

“You have to put this up with the Indianapolis 500; and certainly Daytona and Bathurst, you’d say these are probably – in our world, what we race in – the premier, premier races to win.

“I’ve never been on a podium with so much environment of fun and action and congratulations as here at Bathurst.”

The victory proved to be an emotional moment for Johnson, who has witnessed his team compete through thick and thin.

“I suppose it’s like having your first baby, you know. It’s an extremely proud moment, more so for the team and for the boys in the team,” Johnson told Speedcafe.com.

While Johnson has savoured the moment, the results of the race remain provisional at this stage pending a hearing after DJR Team Penske was charged with an alleged team orders breach.

Johnson has since rubbished suggestions that the instructions to and consequent actions of McLaughlin’s team-mate Fabian Coulthard under Safety Car influenced the outcome of the race.