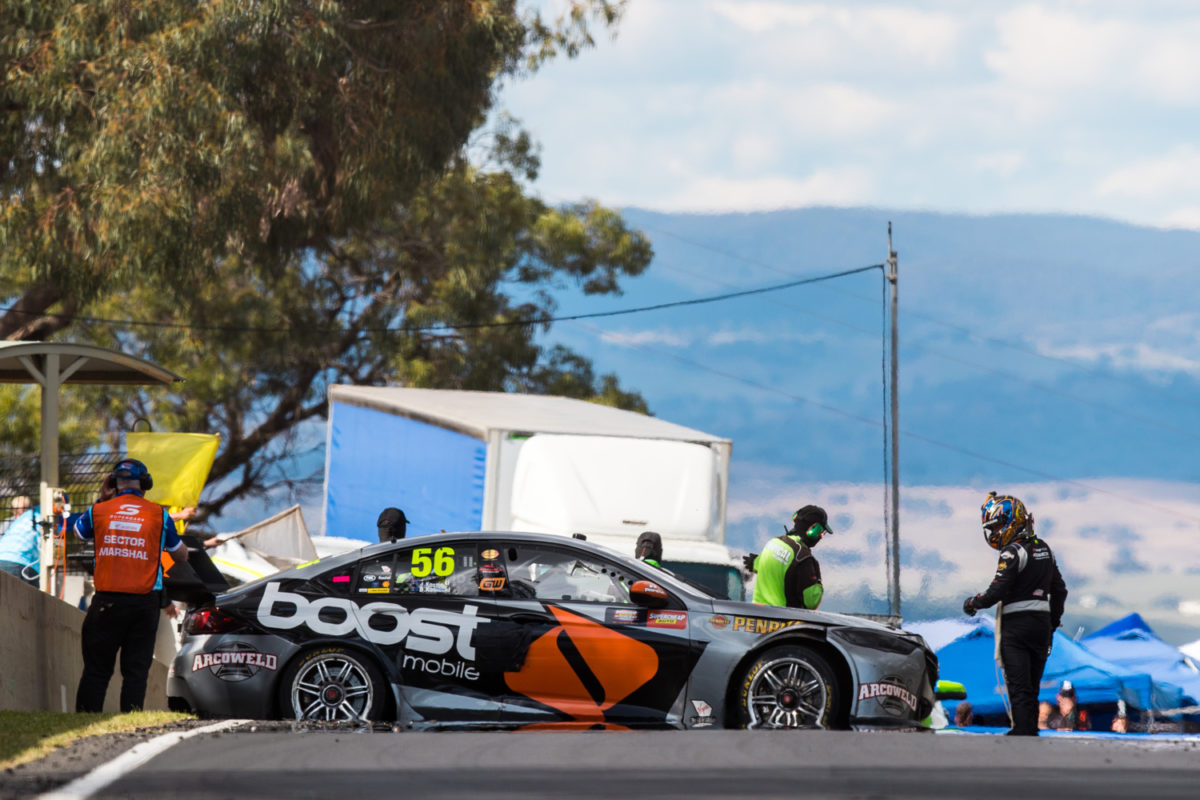 The small Kostecki Brothers Racing team is uncertain about its chances of rebuilding its car in time for the Gold Coast 600 after a sizeable crash at Mount Panorama.

KBR’s fraught weekend came to an end on Lap 113 of the Supercheap Auto Bathurst 1000 when Jake Kostecki glanced the wall on driver’s right as he turned in for the climb to Reid Park.

That contact cannoned the Boost Mobile-backed ZB Commodore into the wall on the opposite side, before it sustained a more jarring hit, again on its left-hand side, when it spun across the track.

The family-run team has a permanent workshop staff of four, including drivers Jake and Brodie Kostecki, and while it was to have contested all three events of the Pirtek Enduro Cup as a wildcard entry, the damage could see it sidelined until November’s Penrite Oil Sandown 500.

“I’m not too sure,” Jake Kostecki told Speedcafe.com when asked if the team would be ready for the Vodafone Gold Coast 600.

“It sort of depends on the damage. Hopefully we can get it done but we’ll definitely be at Sandown, that’s for sure.

“The birdcage may have a little crack in it, it may not, so we’re just going to see in the workshop in the next couple days, and strip it all down and go again.”

The crash was just the latest of dramas for cousins Brodie and Jake Kostecki in their Virgin Australia Supercars Championship debuts.

Jake crashed at Sulman Park in Practice 2 on Thursday and was a passenger when he got to the first right-hander, Griffins Bend, at the start of Practice 4 after a steering rack stop had been left in the repaired #56 ZB Commodore.

KBR also missed Practice 7 entirely due to a power steering problem, and Brodie had to exit the car on the formation lap for the race when he breathed fumes in through his helmet fan, which saw him taken to the medical centre and Jake swapped into the car for the consequent delayed start.

“In practice session we had a rack stop left in, then we had no power steering the next session, then we had Brodie having that issue,” recounted Jake Kostecki.

“I was like ‘Oh, this weekend couldn’t get any worse now,’ and then it did. Hit the wall, and that was it.

“So that just topped it off with the cream on top of the cake.”

KBR did have two prior Supercars Championship event starts to its name after Kurt Kostecki, Jake’s brother, contested last year’s The Bend and Queensland Raceway weekends.

However, the Supercheap Auto Bathurst 1000 represented a far greater task, both during the event and beforehand with the conversion of one of its VF Commodores to a ZB.

As such, Jake Kostecki is still seeing the positives from his and Brodie’s baptism of fire.

“We did take a lot from this weekend,” he said.

“Obviously it’s been really tough, and you’ve got to take something from it, which is how hard the championship is, and then also we’re going to build on what we’re doing.

“We’ve only got a couple of weeks now until the Gold Coast so we’ve got to do some late nights and try to get the car ready for there.”