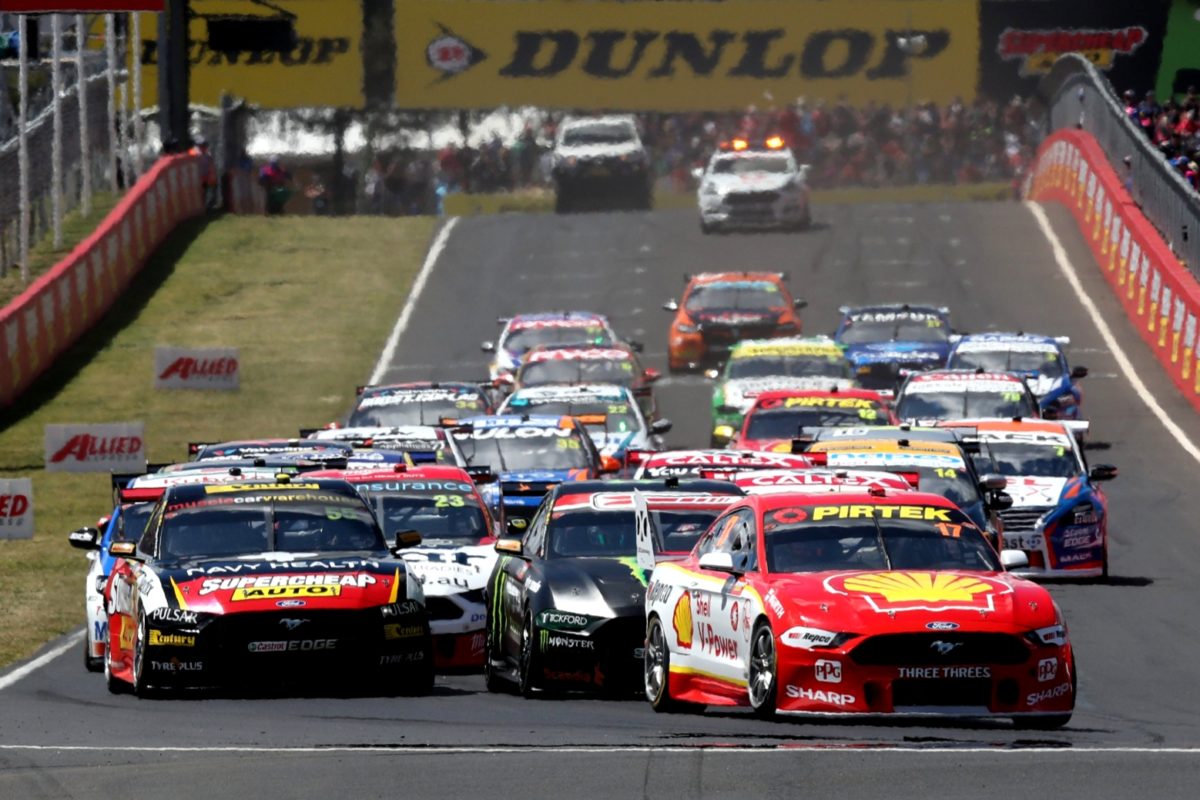 Jamie Whincup/Craig Lowndes, Scott McLaughlin/Alexandre Premat, and Chaz Mostert/James Moffat, are in the effective battle for the lead as the 2019 Supercheap Auto Bathurst 1000 moves past halfway.

Lowndes had just taken up the effective lead in the #888 Red Bull HRT ZB Commodore through the fourth pit stop cycle, which kicked off on Lap 79.

Moffat had been leading the race in the #55 Supercheap Auto Mustang, with him, Whincup and the #17 Shell V-Power Mustang of McLaughlin covered by just over a second before the latter recently took service.

There was drama on the warm up lap when Brodie Kostecki stopped at the exit of Forrest’s Elbow and exited the Boost Mobile Kostecki Brothers Racing entry due to breathing in fumes.

He was taken away in the medical car while Car #56 was towed back to the pits, where Jake Kostecki stepped into the cockpit to take the start from pit lane.

The field was sent for an extra formation lap at 1145 local time/AEDT, 15 minutes after the scheduled start time, with 161 laps still the prescribed distance.

McLaughlin led away from Armor All Pole Position while Caruso bettered fellow Tickford Racing driver Mostert when the lights went out and slotted into second position at Hell Corner.

Will Davison (#23 Milwaukee Mustang) took up fourth position, from Lowndes, Nick Percat (#8 Mobil ZB Commodore), and Tander, a net loss of two positions relative to his starting berth for the latter.

Tim Slade (#14 Freightliner ZB Commodore) and Scott Pye (#2 Mobil 1 ZB Commodore) made side-to-side contact around the back of the top 10 as they exited The Cutting through the right-hander on Lap 1, which put the former into the wall on driver’s left, causing a Safety Car.

There was a wild moment on Lap 4, the restart lap, when Simona De Silvestro (#78 Harvey Norman Altima) dragged alongside Jack Perkins (#22 Mobil 1 ZB Commodore) onto Conrod Straight, before the latter was bumpdrafted clear by David Reynolds (#9 Penrite ZB Commodore).

The 2017 Great Race winner then dived past Perkins to take up 17th position at the final corner of the lap.

McLaughlin broke the lap record for the first time on Lap 5 when he set a 2:05.6186s, before Mostert passed Caruso for second position at Hell Corner on Lap 6.

The lap record fell again on that same lap when McLaughlin clocked a 2:05.4520s and he moved his lead past three seconds on Lap 11.

Meanwhile, Tander had reclaimed a spot from Percat at The Chase on Lap 8, and the Brad Jones Racing driver pitted moments later due to the left-rear tyre going down on Car #8.

McLaughlin was still pulling away when he pitted on Lap 16 and handed over to Premat, while Lowndes, who had been stalking fourth-placed Will Davison, stayed in Car #888 when he stopped a lap later.

Mostert handed Car #55 over to Moffat on Lap 18, then Caruso pitted on Lap 19 and while Waters was able to exit the pits just in front of Lowndes, he did not have the momentum to stay there as they climbed Mountain Straight.

Moments prior, Will Brown had locked the rears and spun the #99 Penrite ZB Commodore at The Chase, just touching the #23 Mustang which he had been pressuring as he went around.

Premat led Moffat by 2.2s after Lap 30, while D’Alberto went deep under brakes to pass Alex Davison at The Chase on Lap 31.

Lowndes had skipped almost two seconds clear of Waters just after making the pass before the Tickford driver started to catch him.

They followed leader Premat into the pits on Lap 38 and Waters was able to jump #888, which Whincup had climbed into for the first time, due to taking on only 87 litres of fuel as compared to 96 litres.

Moffat pitted on Lap 40, which put Luke Youlden back on the lead lap after he had locked up and spun up the run-off area at Hell Corner in #9 a few laps earlier, then pitted before the leaders and been passed on cold tyres.

It also handed the lead to Tander until he pitted three laps later, but van Gisbergen had to contend with a flapping driver’s door when he started his first stint.

The New Zealander was seen driving one-armed across the top of the mountain before managing to reset the latch himself and secure the door.

With most of the second pit stop cycle done, Premat was leading Waters, Mostert, Whincup, van Gisbergen, Heimgartner, and Coulthard.

The first genuine lead change was soon to come although Waters, who had been pressuring Premat for some laps, was shuffled back before that happened.

Waters had challenged the Frenchman on the outside at The Chase on Lap 49 but that only left him vulnerable to Mostert, who criss-crossed Car #6 off Murrary’s Corner, and Whincup followed him past at Hell Corner on Lap 50.

Mostert took up the attack of Premat, who locked the right-front and ran off at The Chase on Lap 50, which allowed both the #55 Mustang and Whincup in the #888 ZB Commodore to go past.

The margin between Mostert and Whincup was 1.3s at the end of Lap 50 but grew to 2.0s in a lap, and remained above two seconds for the rest of the stint.

Waters finally passed Premat to take over third position at Griffins on Lap 52, and Premat pitted five laps later to give #17 back to McLaughlin.

Whincup and Waters pitted on Lap 60 and the cars exited the lane in the same order but McLaughlin was able to pass Caruso as they drove up Mountain Straight.

Mostert came into the lane a couple of laps later and when Moffat was sent back out, he had 3.7s on Whincup.

The four-time Bathurst 1000 winner had got the gap back to about a second once the third pit stop cycle had completed on Lap 64, with McLaughlin about 3.7s further back at that time, Caruso in fourth, Tander fifth, Fullwood sixth, and Coulthard seventh.

The top three continued to compress, with Moffat 0.5s ahead of Whincup, and McLaughlin 0.7s further back, at the end of Lap 70, while Tander began to pressure Caruso for fourth.

Moffat has, however, lost several seconds due to stalling when he attempted to leave the pit box at his last stop, while Caruso appears to have effectively lost a position to D’Alberto/Coulthard during the fourth pit stop cycle and is currently sixth.