Slade: Bathurst exit ‘icing on the cake’ of tough run

Slade: Bathurst exit ‘icing on the cake’ of tough run 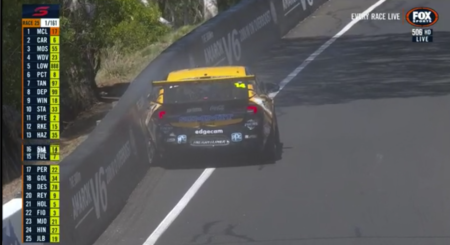 Tim Slade described his opening lap exit from the Supercheap Auto Bathurst 1000 as the “icing on the cake” of a tough run in the category this year.

The Brad Jones Racing driver’s Great Race hopes were over after five corners when the #14 Holden found the wall at the exit of The Cutting after contact.

Slade, who started ninth, was running side-by-side with the #2 Scott Pye-driven Walkinshaw Andretti United entry as they negotiated the uphill right-hander out of The Cutting.

The two cars then made contact, after Pye bumped over the kerb, resulting in Slade being pushed wide and into the wall on the outside.

Stewards investigated the incident before electing it warranted no further action.

The retirement extended Slade’s run to 15 races without a top 10 result.

“It all sort of bottled up there in front of me with Winterbottom and not sure, maybe the Boost car or something. And then, so Pye went around the outside and then going through the next one I was kine of like ‘I can’t really concede’; it’s a fast corner or it’s not even really a corner, it’s a kink so I’ve just sort of tried to give enough room to go around there side-by-side.

“But whilst conceding I didn’t want to pull over and let the field through and I didn’t want to go too wide either because it’s dirty off-line and your chances of ending up in the fence are pretty high if you do get off into that dirt.

“I watched a replay and it looks like I was sort of trying to lead in behind him and he’s bounced off the kerb and his left rear has smacked my right front and the car’s just pitched hard left into the wall.

“It’s obviously massively disappointing just for everyone in the team and Walshy. It’s the last thing you want at the start of a 161 lap race.”

Slade was unsure if there should be any blame apportioned for the clash.

“I don’t know. If there was no kerb there then I think we probably would have got around there no dramas,” he added.

Frustrated to exit the race early, the South Australian felt he had a car that could have factored around the fringes of the top 10.

“We haven’t been completely happy with our dry set-up car or the car in the dry this weekend,” he said.

“We’ve been working hard at trying to improve that. It was obviously good in the wet in qualifying.

“I sort of felt as though if we could have stayed out of trouble the car was kind of there or thereabouts to be just around or just in or just out of the 10 come the end of the day.”

Brad Jones Racing still has two cars in the race although its Nick Percat/Tim Blanchard suffered a left rear puncture in the early stages. The Team CoolDrive entry driven by Macauley Jones and Dean Canto is in 25th spot.