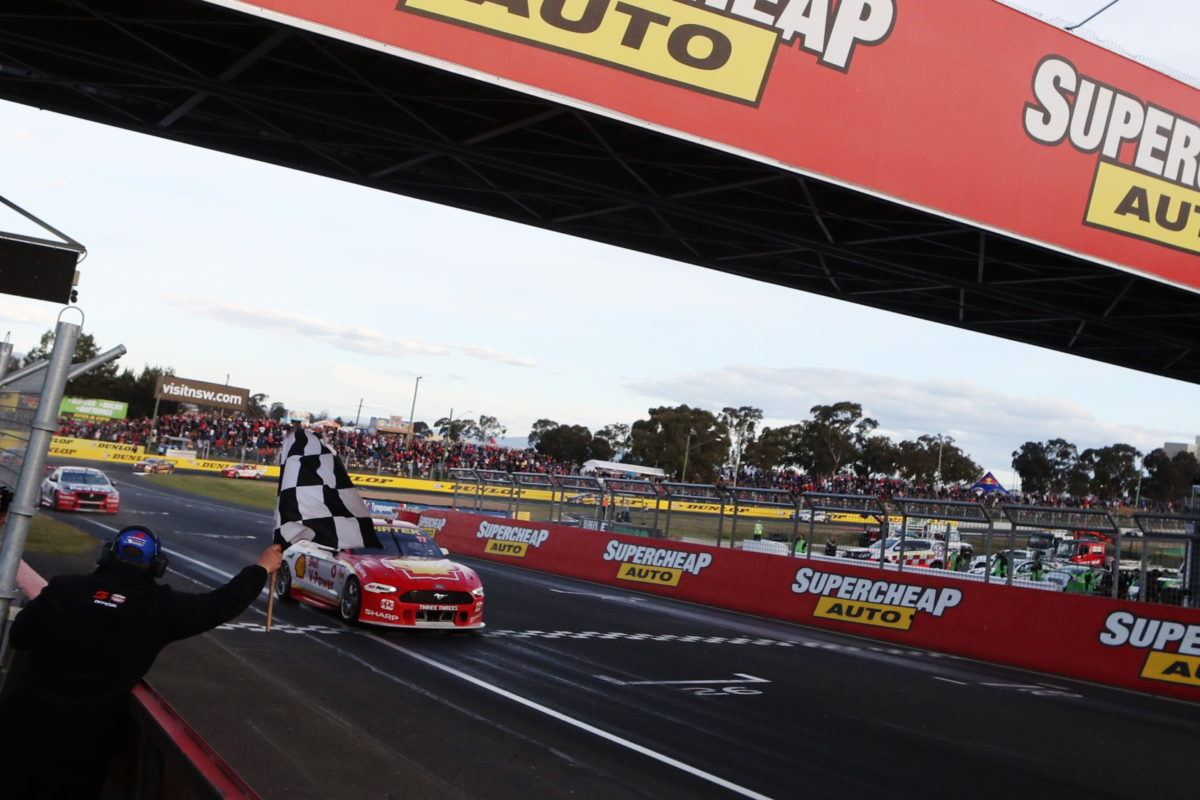 Scott McLaughlin and Alexandre Premat have won an incredible Supercheap Auto Bathurst 1000 after the former survived pressure from Shane van Gisbergen on a final lap restart.

What started as a relatively straightforward race became completely unpredictable in the final 40 laps, with Safety Car after Safety Car changing the strategic permutations at regular intervals.

When Andre Heimgartner crunched his Nissan into the wall at Forrest’s Elbow with the leaders on their 158th lap, the Safety Car was called for an eighth time.

It crawled around Mount Panorama such that there was time for one more green flag lap, at which point McLaughlin led van Gisbergen, James Courtney, and Jamie Whincup.

McLaughlin had stolen a march on van Gisbergen when he accelerated from the left-hander at The Chase on the preceding restart and chose to go at the same place at the end of Lap 160.

Van Gisbergen was wise to it that time, however, and the #17 Shell V-Power Mustang led the #97 Red Bull HRT ZB Commodore across the control line by 0.31s to start the 161st and final lap.

McLaughlin kicked up the dust at McPhillamy Park but had an advantage of 0.61s at the second sector, located at the exit of Forrest’s Elbow, and eventually got home by 0.68s.

The victory is his and Premat’s first in the Supercheap Auto Bathurst 1000, and the first for DJR Team Penske in its current guise, after Dick Johnson Racing last won in 1994.

“So proud of everyone at Shell V-Power Racing; we made a bloody good car.

“I’ve dreamt about this; dreamt about standing on that roof and this guy (Premat) was unbelievable today with those main drivers. I was a little bit stressed.

Premat added, “That was so stressful. That was insane. Everything was gambling, gambling. That was crazy.

“I’m so happy for Shell V-Power to win this race for sure with DJR Team Penske. It’s been 25 years that they didn’t with Bathurst. It’s magic. Magic.”

Van Gisbergen and Garth Tander were classified second, Courtney was just over a second back in the #22 Mobil 1 ZB Commodore which he shared with Jack Perkins despite bumping the wall at one stage, and the Red Bull HRT pairing of Whincup and Craig Lowndes were fourth in the #888 ZB Commodore.

David Reynolds rounded out the top five after a day of drama for him and Luke Youlden in the #9 Penrite ZB Commodore, while Fabian Coulthard and Tony D’Alberto were sixth for Shell V-Power Racing after the former incurred a drive-through penalty for slowing excessively in trying to avoid pit lane stacking under a Safety Car on Lap 135.

Chaz Mostert finished 16th after causing a disaster for Tickford Racing when he took out himself and team-mate Cameron Waters with an attempted pass for third gone wrong in the final 40 laps.

Waters got running again, to be the last finisher in 21st in the #6 Monster Energy Mustang.

Mostert’s co-driver James Moffat had been narrowly leading Whincup and McLaughlin when the latter kicked off the fourth pit stop cycle on Lap 79.

Whincup was into the lane on Lap 80 to take service and give Lowndes his final stint in the #888 ZB Commodore, and McLaughlin similarly made way for Premat in the #17 Mustang on Lap 81.

Garth Tander was able to stay out until Lap 86, at which time he was leader, before pitting and stepping out of Shane van Gisbergen’s #97 ZB Commodore.

That just about completed the cycle, at which point Lowndes led Premat by a bit over one second, Moffat was over nine seconds from the lead having stalled the #55 Mustang when he was dropped in the Tickford pit box, and van Gisbergen almost as far further back in fourth.

Lowndes had 1.0s on Premat at the end of Lap 90, but made an error and was slow off Murray’s about six kilometres later, which allowed the Frenchman to reclaim first position for DJR Team Penske’s #17 entry at Hell Corner.

Premat continued to lead, with Lowndes going with him, until the Frenchman stepped out of the car for the final time at the end of Lap 95.

Lowndes had 7.0s on Moffat when he pitted on Lap 98, and Whincup resumed about 3.6s behind McLaughlin, although on cold tyres.

A Safety Car was called on Lap 102, disadvantaging the #55 Mustang and #97 ZB Commodore.

Todd Hazelwood had slugged the wall at the Metal Grate in the #35 SP Toools ZB Commodore and such was the timing of the Safety Car call, third placed D’Alberto was able to make the pits immediately and hand over to Coulthard, while Moffat and van Gisbergen had to go around again.

McLaughlin had the lapped Alex Rullo between himself and Whincup for the Lap 105 restart and while the latter was able to clear the #78 Harvey Norman Altima at Griffins, he was already a second behind.

The margin was almost 1.7s at the end of the lap, and 2.4s in another two laps, before it became apparent that the right edge of Car #17’s rear bar was loose.

The front-runners were all turning the wick up but McLaughlin had superior pace, further lowering the lap record to 2:05.2946s on Lap 109.

A third Safety Car was called on Lap 113 when Jake Kostecki lost the rear of the #56 Boost Mobile KBR car on the run to Reid Park and slammed into the wall.

All but three cars were called into the pits straight away, meaning both Coulthard and van Gisbergen had to stack.

Crucially, Whincup jumped McLaughlin in the pits having reportedly taken on around 60 litres versus approximately 80 litres for the latter, who did have the bumper taped up as well.

Holdsworth did not pit at all during the yellow, perhaps a play to save Mostert from having to stack, and he led at the restart from Whincup, McLaughlin, Waters, Mostert, Heimgartner, van Gisbergen, Coulthard, Courtney, and Reynolds, the latter of whom had made track position with some aggressive driving after the preceding Safety Car.

Everyone avoided the large oil soak patch when the race restarted on Lap 117, and the lapped cars were cleared fairly quickly despite a hairy moment for Rullo at McPhillamy Park, near the head of the train.

Towards the bottom of the hill, van Gisbergen came from downtown to pass Heimgartner for sixth at The Chase, and Coulthard followed #97 by when the #7 Altima got hung wide exiting the right-hander.

Holdsworth pitted on Lap 122, at which time Whincup led McLaughlin by 0.5s, while Mostert was tailing third placed team-mate Waters.

There was another horror moment for Tickford on Lap 123 when Mostert managed to wipe out himself and Waters at The Chase.

Waters went slightly defensive in the braking zone and Mostert jinked to the outside but had a major lock-up, glanced the right-rear corner of Car #6, and carted both into the gravel trap.

Van Gisbergen was the following car and pre-empted the call of the Safety Car by pitting once he got around the corner.

The race restarted on Lap 127 but green flag running lasted less than a lap as Anton De Pasquale clouted the wall on the climb to Reid Park due to a suspected stuck throttle in the #99 Penrite ZB Commodore.

The next restart came on Lap 130, prompting van Gisbergen to shove his #97 ZB Commodore down the inside of Will Davison and take seventh position at The Cutting.

Whincup had to mid-track Car #888 at Griffins on Lap 133 as McLaughlin began to seriously stalk him, and Courtney bumped the wall at McPhillamy Park while running in 12th.

Another Safety Car was called on Lap 135, too early for anyone to get home on one more stop with a subsequent yellow, when Alexander Rossi beached the #27 NAPA ZB Commodore at Murray’s.

Coulthard, still running third, dropped to a relative crawl to save himself having to stack behind McLaughlin in pit lane, which triggered an investigation.

At the Lap 137 restart, Whincup led McLaughlin having got out of his pit box ahead, with two lapped cars between them.

Reynolds had a huge lock-up at The Chase but caught it and pressed on, while Whincup had a lead of 1.2s with Macauley Jones (#21 CoolDrive ZB Commodore) still behind him on the road at the end of Lap 137.

McLaughlin cleared Jones next time around and closed to 0.6s behind by the control line, then got as close as 0.17s at the end of Lap 140.

However, while Whincup was reportedly told to push, McLaughlin was reined in to save fuel.

As the margin between first and second started to blow out, DJR Team Penske managing director Ryan Story said, “What he’s saving at the moment he will make it home and there will be a little bit spare in the spot.

It appeared that all the front-runners were still a lap short on fuel with Golding, who had pitted again on Lap 140, believed to be best placed to pick up the pieces in eighth position if those in front of him coughed.

Heimgartner and Winterbottom pitted from fourth and fifth respectively on Lap 146, while Golding’s and co-driver Richard Muscat’s hopes were dashed when the youngster had to pit with a vibration on Lap 148.

A bizarre crash between Jacobson and Richie Stanaway (#33 Boost Mobile ZB Commodore) at Hell Corner caused another Safety Car to be called on Lap 151, which prompted Whincup to pit and he dropped to fourth having taken on five seconds’ worth of fuel only, and no tyres.

The race leader executed an extremely good restart, accelerating at The Chase’s left-hander and gapping van Gisbergen by almost 0.9s at the control line to start Lap 153.

Van Gisbergen touched the wall at Forrest’s Elbow on Lap 154 as he crept closer to McLaughlin, who was still fuel saving.

McLaughlin then looked to be pushing again on Lap 158, just as Heimgartner had his crash.

The Kiwi, who had been in or near the top 10 for most of the day along with co-driver Fullwood, was right up behind seventh placed Winterbottom when he glanced the inside wall at Forrest’s Elbow, which spat him into the outside tyre barrier virtually head-on.

A slow-moving Safety Car saw to it that the race would finish under green, in yet another thrilling edition of the Supercheap Auto Bathurst 1000.

McLaughlin also extends his lead in the Virgin Australia Supercars Championship beyond two events’ worth with three to go, the next being the Vodafone Gold Coast 600 on October 25-27.