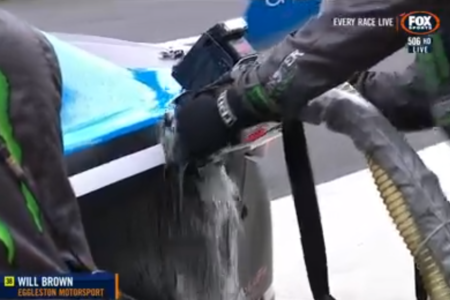 An unfortunate mismatch between Triple Eight fillers and a Tickford fuel head was the reason for Eggleston Motorsport’s repeated refuelling problems during the Bathurst Super2 race.

Fuel leaked down the side of both Will Brown’s and Justin Ruggier’s Triple Eight-built VF Commodores when they were being serviced in Tickford Racing’s pit area during the 250km race.

The Bathurst round of the Dunlop Super2 Series operates to a unique mini-enduro format whereby cars must have at least four tyres changed and take on 85 litres of fuel during the 41-lap race.

Regulations require the Super2 team to change its own wheels, but the Supercars Championship team with which it is stationed in the lane provides the fuel filler, car controller, and spike person.

Having had a similar problem with a fuel head not mating properly to the cars last year, when EMS cars were situated with DJR Team Penske, the Melbourne-based Super2 team even borrowed one of Tickford’s heads, which would normally be used to fill a Mustang, in order to test at its workshop beforehand.

As it turns out, that particular head was not the one used during the race and while all heads should theoretically be identical, in reality they were not.

“When you’ve got to work with the team, you get the fuel equipment, you test it on your car, so we did that, we got their fuel head from their workshop to ours, did a full fill and it was fine,” team owner Rachael Eggleston told Speedcafe.com.

“But the fuel head that they gave to us was their spare one, which we said to use in the race but they didn’t use that one.

“Technically speaking, they should all be the same but obviously there’s some slight difference there and it fits differently to their race ones, so that was the issue.”

Tickford attempted to modify the fuel head after Brown’s first of two stops which appeared to reduce the quantity of spillage but did not resolve the issue completely.

“It’s a bit of a lengthy process (to swap a head), so we made some adjustments to the (locating) peg because that was fouling,” recounted Eggleston.

“We have Triple Eight fillers on our cars so in an ideal world a Triple Eight connection is going to be the best one but obviously that’s not available because the Triple Eight (Super2) team is there.

“Unfortunately, in a race where we don’t control half of the pit stop, you kind of have to just go with what you’ve got.

“We did everything we could to make sure that it would work and obviously the one that got trialled was fine but unfortunately it’s not what was used in the race.

“As they say and as everybody will say, they should all be the same, which is true, but in reality, unfortunately they didn’t fit the same.”

Both Cars #38 and #88 were placed under investigation over refuelling procedures, but stewards ultimately cleared EMS of wrongdoing.

“During the Race, the Stewards observed fuel being spilled during the refuelling phase of the Pit Stops for both Car 38, Will Brown, and Car 88, Justin Ruggier,” read the stewards summary.

“Therefore, no breach of the rules was established.”

Brown, who was already strategically disadvantaged by an early mechanical black flag due to a flapping passenger door, crashed at The Cutting on Lap 30 while he was pushing to recover ground shortly after his second pit stop.

MW Motorsport’s Bryce Fullwood lost the race win due to setting his fastest third sector with a local yellow out at The Chase on the final lap, meaning Tickford Racing’s Thomas Randle was officially the victor.