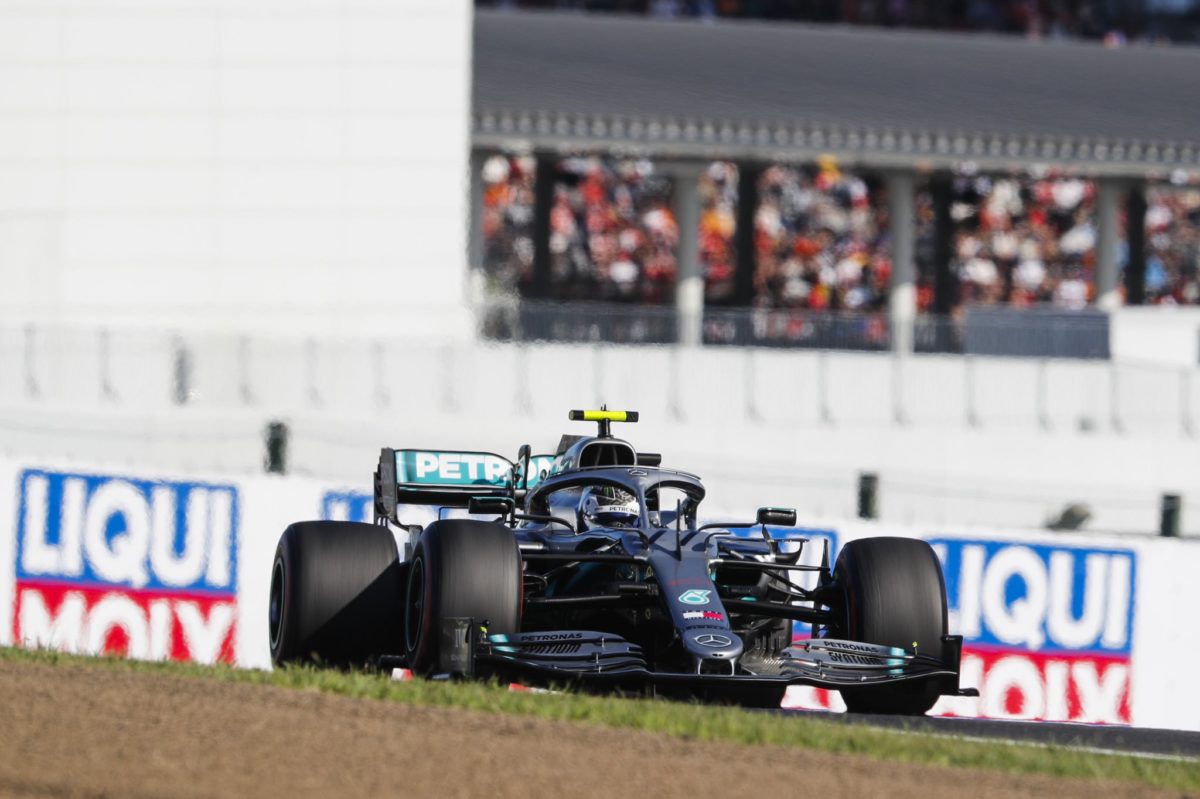 Mercedes driver Valtteri Bottas has claimed a dominant victory at the Japanese Grand Prix, taking a lights-to-flag win ahead of Ferrari’s Sebastian Vettel.

Bottas made the most of his race start, passing the slow starting Vettel off the line and Charles Leclerc into the first turn and was untroubled for the remainder of the race.

“Starting third here is never easy, but there’s no point in ever giving up on anything,” said Bottas.

“I knew anything was possible today and opportunities were there.

“The first one is at the start and I had a nice start and obviously Sebastian had an issue. I managed to get in the lead and then the pace was super good and I could control the race.”

Vettel was hounded by Lewis Hamilton in the closing stages, with the one-three finish for Mercedes cementing their sixth straight constructors’ title.

Pierre Gasly, Nico Hulkenberg and Lance Stroll rounded out the points scorers in the 53-lap race that was devoid of Safety Car interruptions.

While Bottas made the jump from third to first from the start, behind him Max Verstappen and Leclerc made contact.

The collision sent Verstappen to 19th place, while Leclerc stayed on track with a damaged front wing, in a move that enraged Verstappen.

“Where should I go?” asked the Dutch driver on the radio. “He just came straight for my car!”

Vettel moved into second behind Bottas on lap one, with Hamilton fourth ahead of Sainz, Lando Norris and Albon.

With Leclerc looking at a potential two-stop strategy, the Ferrari driver remained on track ahead of Hamilton, despite his front wing jettisoning carbon the circuit and removing the Mercedes driver’s mirror.

“I don’t know how he’s not been given a warning flag,” Hamilton complained over the radio.

Leclerc pitted on lap 4 for a new wing, while Norris and Albon made contact at the final chicane – leaving the McLaren driver with damage and sending him down the field.

In the mid-pack, Ricciardo was working his way from 16th on the grid to 10th place by lap 7.

Leclerc and Verstappen found each other on track again, with the Monegasque driver making a bold move for 16th place into Turn 1 on lap 9.

The Ferrari driver then used his speed advantage to pass Daniil Kvyat two laps later as he looked to recover from his early collision and two laps later moved ahead of Raikkonen at 130R.

In front of Honda’s home fans, Verstappen’s day ended on lap 15, with his Red Bull Racing team opting to retire the car due to the damage from the opening lap.

Vettel was the first of the front runners to pit on lap 17, with Bottas following one lap later.

Mercedes opted to split the strategies of its driver, with Bottas forced to push on medium tyres after the team confirmed he would be two-stopping to Hamilton’s planned one.

The Finn pushed after exiting the pits, setting a 1:32.137s on lap 19 as he looked to close the gap to Hamilton in first.

After reporting his front tyres were ‘dead’, Hamilton stopped on lap 22, exiting the pits in third place.

Leclerc stopped again on lap 25 for a set of Pirelli softs to take him to the end of the race.

Of the one stoppers, Sainz stretched his medium tyres to lap 28, while Ricciardo pitted two laps later from fifth place – exiting in 11th.

Vettel pitted again on lap 32, while Bottas stayed out four laps later and retained his position ahead of Vettel, but nine seconds behind Hamilton.

Despite the older tyres, Hamilton continued to maintain the advantage, with Bottas initially unable to pressure the championship leader.

Hamilton shifted strategies on lap 42, pitting for softs and re-joining the race in third place and five seconds behind Vettel and handing the lead back to Bottas.

Down the field, Ricciardo reclaimed 10th on lap 42, passing Perez into Turn 1.

With the laps counting down, Ferrari pondered a final stop for Leclerc in sixth place – opting against the move as the 21-year-old chased Sainz.

Ricciardo’s earlier patience in electing to run a long first stint began to pay dividends in the final laps, passing Hulkenberg and Stroll on lap 46. Three laps later, the Renault driver moved ahead of Gasly to move into seventh place.

Hamilton reduced the gap to Vettel in the closing laps, as he made a series of attempts to overtake the German. The Mercedes driver continued to wait for opportunities using DRS, while Vettel was able to hold his position.

Perez crashed on the penultimate lap at Turn 2 from eighth place after colliding with Gasly – leaving his team-mate Stroll to claim the final points paying position.

The result sealed the constructors’ championship for Mercedes and left only Bottas a mathematical possibility of challenging Hamilton the title.

As such, it is effectively left the winner of both the drivers’ and constructors’ championships for a record sixth consecutive year.

“To win six years in a row, the constructors’ championship, that’s the main point,” said Hamilton. “I wanted to get the best points for the team today.”