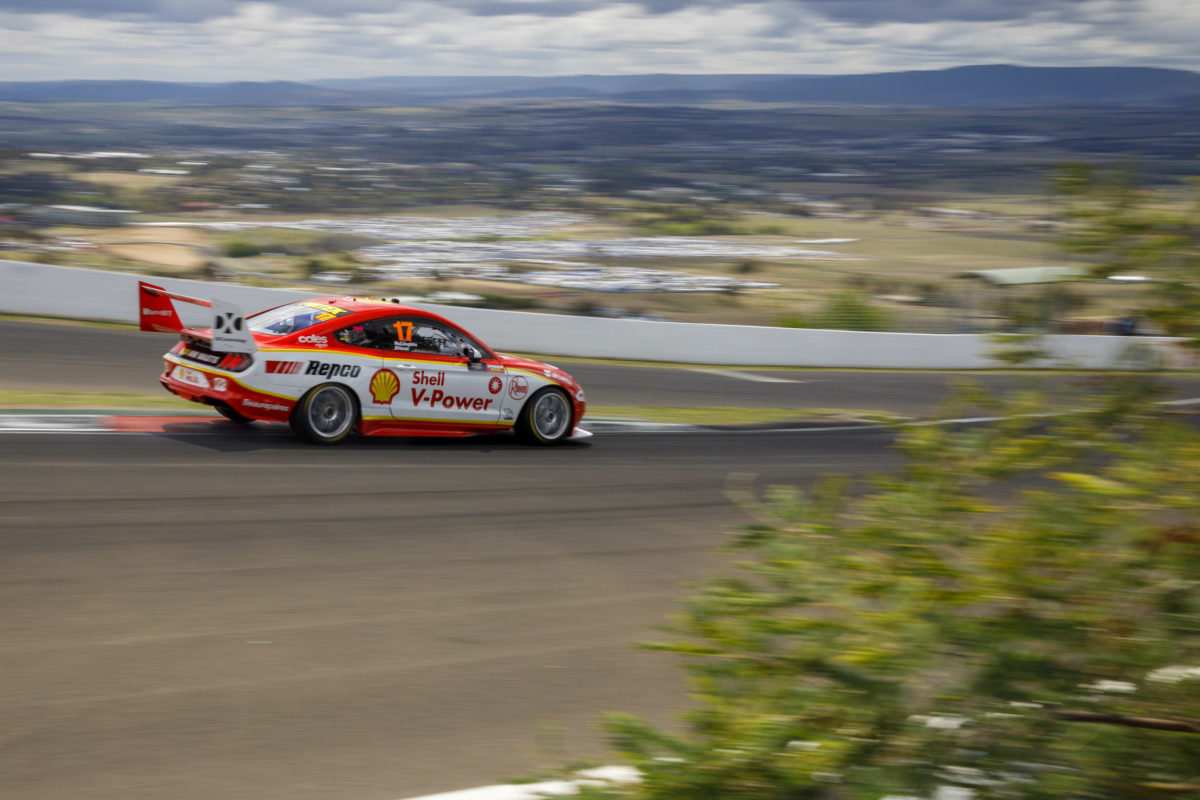 Scott McLaughlin has claimed Armor All Pole Position for the Supercheap Auto Bathurst 1000 courtesy of a lap record effort at Mount Panorama.

The Shell V-Power Racing driver obliterated his rivals’ times at every split around the 6.213km circuit to set a time more than four tenths faster than second fastest Chaz Mostert.

A tenth up on Jamie Whincup’s first sector benchmark and three tenths up on Mostert’s split, McLaughlin then extended that across the top before a tidy final sector confirmed what was, by that stage, almost a forgone conclusion.

Mostert was second fastest in the Supercheap Auto entry with his Tickford team-mate Cameron Waters making it an all-Mustang top three.

“Really proud of the team at Shell V-Power Racing, far out this car is just a rocket ship and it just hooked up in those conditions,” said McLaughlin.

“Coming down the hill I was pretty fast there. I was like ‘jeez this is good’ so I just got to hold onto it, hold onto the thing.

“We’ve got one big one to get tomorrow and I’m focused on that more truly.

“We’ve qualified well, got that out of the way and we’ll just start from pole, the best possible position we can and try and get the great one.”

Anton De Pasquale was first out in the Shootout, the 23-year-old sliding his way out of the final corner in a four-wheel drift to bank a 2:04.3830s.

It was a composed lap, which would see the Erebus youngster climb from a provisional 10th to seventh.

A steady start to his lap saw Winterbottom two tenths down on De Pasquale at the first sector, a trend that continued to the second split.

The 2013 race winner struggled with front locking, dropping time at Forrest’s Elbow as the Irwin Racing entry completed the lap in 2:04.9800s.

Waters was the fastest of anyone to the first split as he opened his lap, maximising the track across the top of the mountain as he came close to brushing the wall at Reid Park.

It set the Monster Energy Mustang up to become the first to drop into the 2:03s bracket, his 2:03.9178s over four tenths faster than De Pasquale had managed.

The Red Bull Holden Racing Team entry of Whincup was next out, having set the seventh fastest time in qualifying courtesy of a late lap on Friday afternoon.

His ninth appearance in the Armor All Top 10 Shootout, Whincup went fastest of anyone to the opening split with a 50.6621s – a time a tenth faster than McLaughlin’s practice lap record from earlier in the weekend.

Losing time across the top of the mountain, even a marginally faster final split wasn’t enough to claw back the time lost, his 2:03.9505s ultimately 0.03s slower than Waters had managed.

A sluggish start saw Nick Percat faster than only Winerbottom at the first split, two tenths away from the ultimate pace.

He continued to bleed time in the middle of the lap, a 32.9881s sector some four tenths of Waters’ best to that point and saw him fourth fastest of the five runners with a 2:04.6705s.

The second Brad Jones Racing entry was next out, Tim Slade having set the fifth fastest time in qualifying.

He was slowest of the session to the first split, putting in a steady middle part of the lap as he crossed the mountain and began the descent towards Conrod Straight.

Will Davison was just the second Ford to take part in the session, the Milwaukee Racing setting a competitive 50.9709s time as he made his way up the Mountain.

By Forrest’s Elbow he’d slipped to more than four tenths slower than Waters’ effort, though a rapid final sector saw him go third fastest in the session on a 2:04.3295.

An aggressive run across the top saw Shane van Gisbergen come close to rubbing the wall at Reid Park, and proved a third of a second off the ultimate pace as he turned onto Conrod Straight.

The Commodore had bounced off the rev limit on the run into The Cutting, van Gisbergen electing not to pluck fifth and instead hold the car on the limiter in fourth.

Despite being fastest through the final sector, it was good enough for only third at the time on a 2:04.1136s.

Using all the road on the exit of Griffins Bend, Mostert recorded a 50.8914s, the third fastest runner to the first split.

A rapid run over the top saw him regain time with less than a tenth splitting he and Waters as the Supercheap Auto entry slid its way onto Conrod Straight.

The slide proved to cost him nothing, Mostert powering down the Mountain to set the fastest time at the final split to claim provisional pole with a 2:03.7897s.

Last on track, McLaughlin was on maximum attack from Hell Corner, using all the road on exit as he headed up the Mountain.

Composed through Griffins Bend, he was slightly wide through The Cutting, though still managed to light up the timing screens with a 50.5585s split.

Smooth across the top, the Kiwi danced the Shell V-Power Mustang down the hill, a third of a second faster than anyone else could muster.

Lightning through the final third of the lap, McLaughlin’s lap saw him set an untouchable 2:03.3783s, the fastest Supercar lap ever set around Mount Panorama.

It locked the 2018 Supercars champion in to his second Armor All Pole Position at the Supercheap Auto Bathurst 1000, doing so with a lap faster than anyone has ever managed.