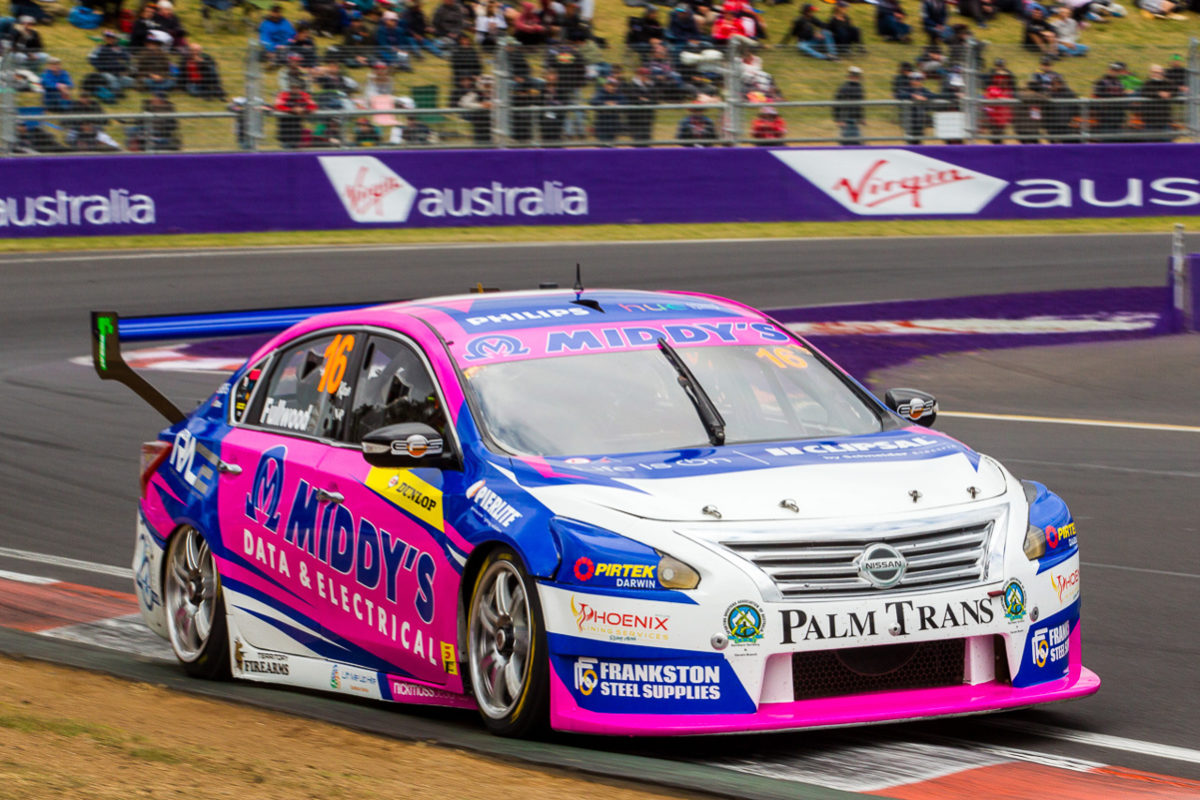 MW Motorsport’s Bryce Fullwood dominated the Dunlop Super2 Series’ Bathurst 250 mini-enduro but is under investigation for setting the fastest lap with yellow flags out.

The series leader had qualified on Armor All Pole Position after topping both practice sessions at Mount Panorama and was only headed in the 41-lap race during the pit stop cycle.

A Safety Car cost Fullwood (#16 Altima) an effective lead of over 13 seconds at one point but he still managed to win by 13.3s with a lap record on the final lap.

However, local yellows were on display at The Chase due to the presence of Ash Walsh’s Matt Stone Racing entry in the gravel trap after he clashed with Jordan Boys, and Fullwood is now under investigation.

Will Brown, on the other hand, had a horror afternoon in the #38 Eggleston Motorsport VF Commodore, beginning with a loose door, ending with a crash, and featuring pit stop dramas in between.

Fullwood got the jump from pole and led MWM team-mate Tyler Everingham (#27 Altima) up Mountain Straight, with third through fifth filled by Brown, Walsh, and Randle.

Brown pressured Tyler Everingham until the rookie outbraked himself and sailed off at The Chase on Lap 3, dropping to sixth, but Fullwood continued to pull away from the field.

Fullwood was 3.8s up on Brown at the end of Lap 4, just before the latter was issued a mechanical black flag for a loose passenger door on the #38 VF Commodore.

Despite having clear track in front of him, Brown was still losing significant ground to a speedy Fullwood such that he trailed the #16 Altima by 4.5s after Lap 5, before pitting a lap later.

While the rogue door was taped back into place, the fuel fill proved problematic due to a mismatch between the VF’s inlet and the coupling used by Tickford Racing, whose pit box Eggleston had been stationed at.

Walsh had assumed second position due to Brown peeling off and dropping to the back but was under pressure from Randle, which began to intensify on Lap 12.

Meanwhile, Fullwood was adding several tenths per lap to his lead, which had ballooned to 11.6s at the end of Lap 15.

Randle appeared to give his #5 FGX Falcon a breather before applying the blowtorch to Walsh again, but was given the spot when the MSR driver descended into the pit entry road on Lap 18.

Walsh, however, did not make pit entry itself as he locked the rears of the #35 VF Commodore and ran through the gravel trap before rejoining in fourth position, behind Kostecki.

Both Randle and Walsh did pit on the next lap, with the former squirming as he braked for the speed limit line.

Randle’s crew had a nut problem which delayed the right-rear wheel change while Walsh stalled when he was dropped off the jacks.

Fullwood’s pit stop, which took place at the end of Lap 20, was not straightforward either, with an issue on the left-front wheel.

He nevertheless regained first position when Kurt Kostecki led the last few into pit lane at the end of Lap 21.

Brown was in second position, about half a second back, but had to pit again in order to make it home on fuel.

The track had been declared wet ahead of the start and signs of patchy rain continued but Fullwood was showing no sign of letting up.

He was 3.7s ahead of Brown and had more than 13 seconds on Randle at the end of Lap 25, only for a Safety Car to be called on the next lap when Marjoram’s engine failed and he parked on the exit of Griffins Bend.

Brown took the opportunity to pit, putting him back to the rear of what was by then a 14-car field, leaving Randle in second, from Kostecki, Everingham, and Grove.

Fullwood pulled a few lengths when the race restarted on Lap 29 and was 1.5s up by the time they got back to the control line.

Brown was still near the tail end of the field when he ended up in the grey on approach to The Cutting and crunched the right-hand corner of Car #38 against the wall.

He was able to steer into the gap in the wall around the corner on driver’s left, allowing Fullwood’s romp to continue.

The MWM driver missed the lap record by 0.0006s on Lap 32 and when Randle set his personal best lap on Lap 34, Fullwood was still able to gap the Tickford driver by almost half a second.

Everingham ceded fourth position to Grove when he locked up and ran off at Murray’s Corner on Lap 35, while Fullwood moved his lead over Randle past 10 seconds on Lap 39.

Fullwood was still threatening the lap record despite being deep in the stint, and did so with a 2:06.5888s on the last lap, but with local yellows on display at The Chase.

Kostecki took the chequered flag a touch over five seconds back from Randle, while Grove finished fourth and Everingham fifth.

Walsh was a DNF after locking up and making side-to-side contact with Boys under brakes at The Chase on Lap 40, which broke the right-rear suspension on Car #35 and saw the former come to rest in the gravel trap.

That incident is also under investigation, as are the refuelling issues for both Brown and team-mate Justin Ruggier (#88 VF Commodore).

Fullwood’s series lead is now 405 points, with Randle moving up to second but the title a very good chance of being decided at the penultimate round at Sandown, on November 8-10.