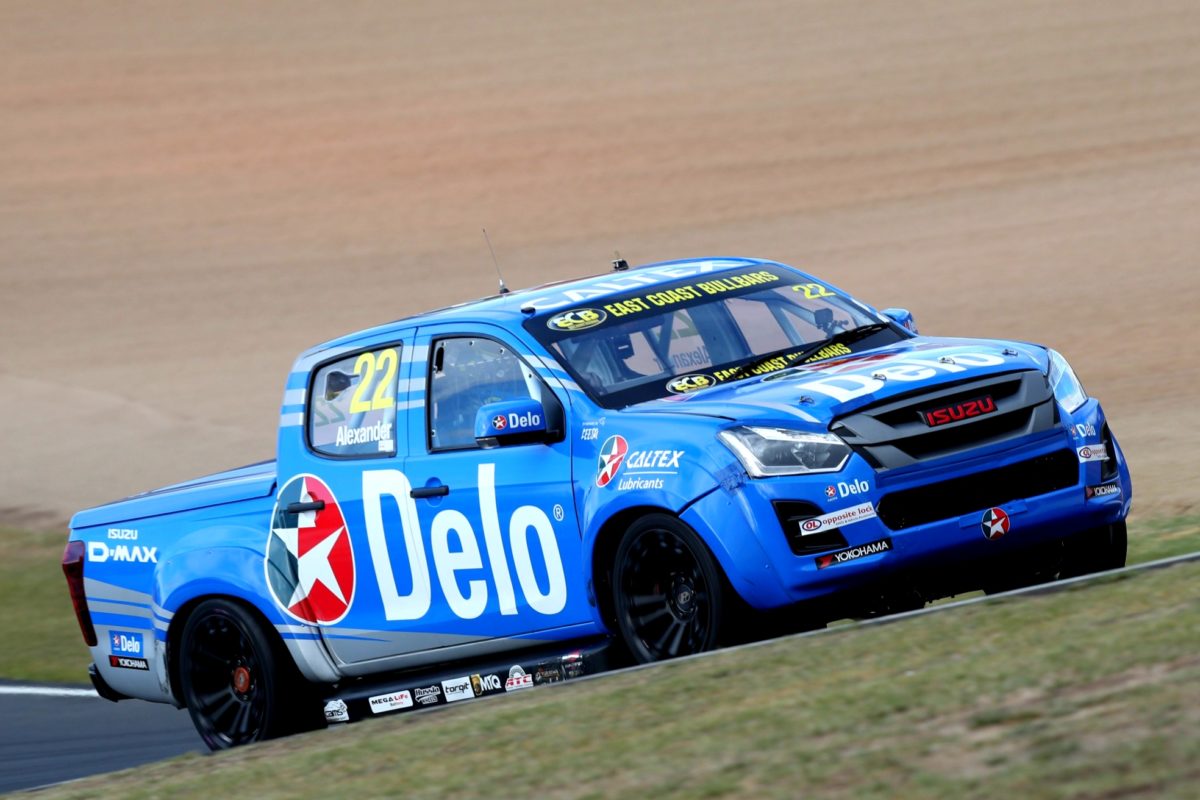 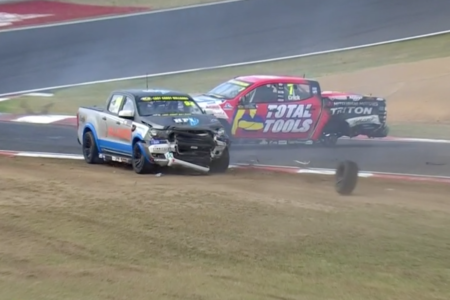 Tom Alexander stayed clear of carnage to win a crash-filled second SuperUtes race of Round 6 at the Supercheap Auto Bathurst 1000 in which almost half the field were DNFs.

What was scheduled to be an eight-lap race was called a lap early, under Safety Car, after a multi-car incident on Lap 5 at The Chase.

Cameron Crick (Mitsubishi Triton) and Ben Walsh (Toyota Hilux) ran side-by-side under braking for The Chase, but Crick locked the rears and backed into the side of Walsh, turning both cars around.

The two following cars of of Nathan Pretty (Holden Colorado) and Josh Anderson (Toyota Hilux), who were also alongside each other, managed to avoid getting involved despite being just behind. 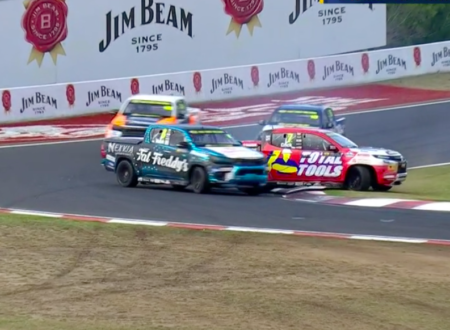 The moment of contact between Crick and Walsh pic: Fox Sports

Alexander (Isuzu D-Max) had a cushion of more than 15 seconds when Race Control deployed the Safety Car which effectively ended the race.

Christopher Formosa (Ford Ranger) led away from the reverse grid start as a tightly bunched field ran three-wide up Mountain Straight on the opening lap.

A fast-starting Alexander found his way to second, before sweeping around the outside of Formosa for the lead at McPhillamy Park in what would prove to be the race-winning move.

Seconds later, Craig Thompson spun his Toyota Hilux at The Esses, possibly due to a touch from Walsh although replays were not conclusive.

Thompson kept off the walls and although he was near the head of the pack, those following managed to avoid him.

By the time the field got to Conrod Straight, Alexander had already pulled a two-second lead over Hall who was then shuffled back by Woods, Ryal Harris (Mazda BT-50) and Elliot Barbour (Mitsubishi Triton).

Barbour, whose car had an engine change overnight, made a mistake at The Chase and allowed Harris into second, but the latter then slowed and retired to the pits with an issue. 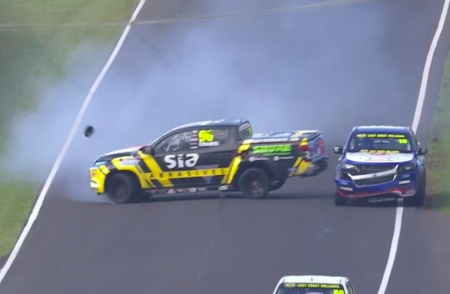 On the same lap, Barbour’s car began billowing black smoke on the run up to The Cutting, with the Triton driver then making the slow journey back to the pits.

There was a wild incident on Lap 4 when Graham Edwards (Toyota Hilux) and Pretty made contact at high speed on Conrod, sending the former spinning into the concrete wall.

The car stayed right-side-up and Edwards was able to pull to the side of the track at The Chase.

Moments later, Crick, Walsh, and Hall came together bringing an early end to the drama-filled race with six laps completed.

Anderson came across the line fourth ahead of Walsh, who managed to get back underway after the contact with Crick.

Thompson and Formosa were the last of the finishers, with Hall having pulled into the pits due to the damage to his car and Matt Spratt (Holden Colorado) also retiring on Lap 5.

Ben Falk was a non-starter after struggling with car issues throughout the weekend.

Alexander’s win and Harris’ retirement puts the former back into the series lead, by 11 points.

The third and final race of Round 6 of the ECB SuperUtes Series takes place at 1325 local time/AEDT.