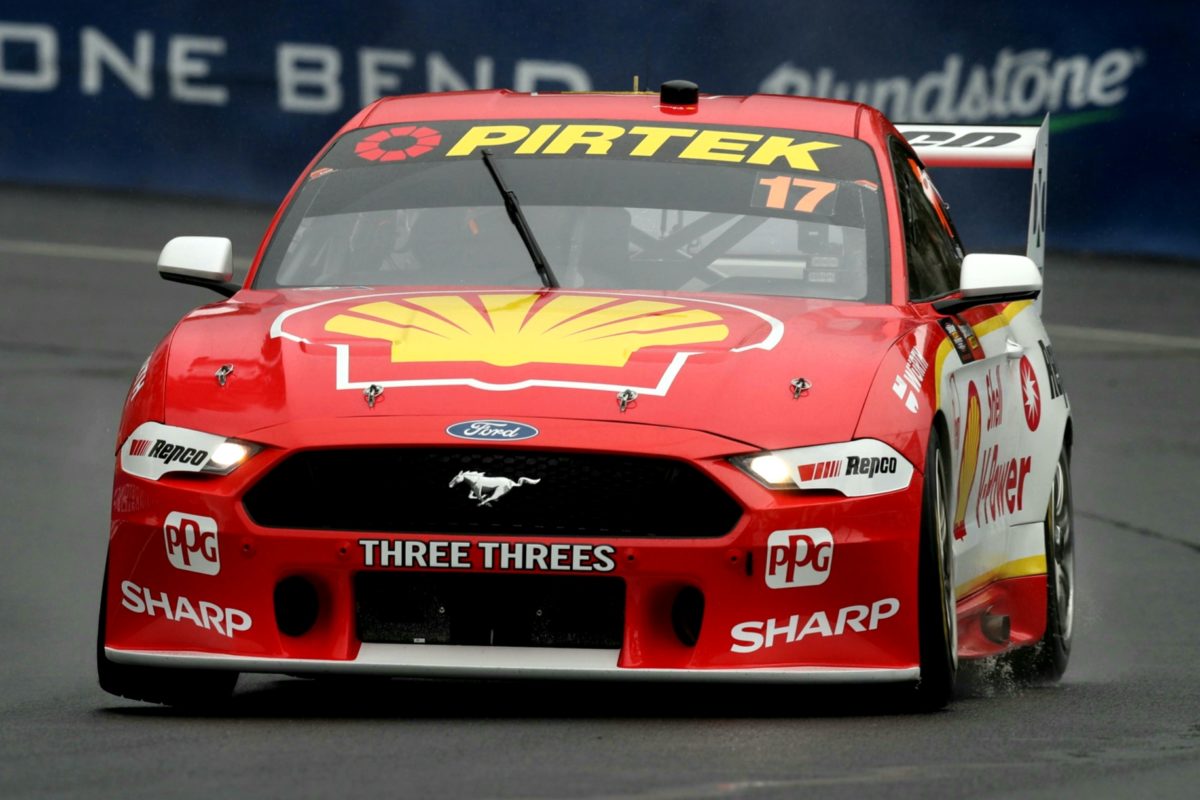 Scott McLaughlin has qualified on provisional pole position for the Bathurst 1000 in a wet session as Fabian Coulthard and David Reynolds both missed the Armor All Top 10 Shootout.

McLaughlin finished 0.4008s clear of Chaz Mostert with a 2:27.6476s in his #17 Shell V-Power Mustang, while Jamie Whincup and Cameron Waters rescued themselves by vaulting into the top 10 with the chequered flag out.

The biggest names to miss tomorrow afternoon’s Shootout were McLaughlin’s team-mate Fabian Coulthard, who qualified 16th in the #12 Mustang, and Penrite Racing’s David Reynolds, who put the #9 ZB Commodore back in 22nd on the grid.

The session began on a fully wet track and while dry grooves appeared in patches towards the end of the 40-minute session, all 26 cars remained on treaded tyres throughout.

McLaughlin set the fastest first flyer at 2:33.4720s, with Mostert 1.1546s slower in second position in the #55 Supercheap Auto Mustang.

Mostert then took over top spot with a 2:30.6329s and enjoyed a spell of around 15 minutes in that position, during which time he moved the benchmark to 2:29.4205s with repeated improvements.

McLaughlin came back out and closed to 1.1761s behind shortly into his second run, then reclaimed first position with a 2:29.1333s.

He twice went faster again, and that was necessary in order to take provisional pole given that Mostert was able to set a 2:28.0484s with the chequered flag out.

“I was so nervous before that qualifying session because we had such a good car and this is probably going to be the only wet session we have,” said McLaughlin, who still found himself off the road during the session.

“(I am) Really proud; we’ve been struggling with our wet car so to come out an awesome car from the start. So stoked.

“There were a couple of moments. I also want to be at the end of the Shootout when the track’s a bit colder and a little bit faster, so I was pushing to get those few spots.

“Obviously Sunday is the day we need to worry about. I’m just so proud of everyone at Shell V-Power Racing; honestly, we have struggled with our wet car and that was hands down the best wet car I’ve ever had.”

Mostert also had some nervous moments in his Tickford Racing entry, recounting, “Everyone down pit lane can really give themselves a pat on the back because I think on my behalf I probably had 10 moments out there where I thought ‘Oh that was close.’”

While the leading pair of cars was the same from start to finish, the rest of the timing screen changed regularly in the final 10 minutes, leading to a frantic finish to proceedings.

Shane van Gisbergen ran off the track at least three times in the #97 Red Bull HRT ZB Commodore but still provisionally qualified third on the grid with a fastest lap of 2:29.1880s, having been outside the top 10 in the final minute, and in the danger zone in ninth position until his very last tour.

Will Davison was a regular presence around the top five and ended up fourth in the #23 Milwaukee Mustang, ahead of Brad Jones Racing’s Tim Slade (#14 Freightliner ZB Commodore) and Nick Percat (#8 Mobil ZB Commodore).

While those three looked a good chance of making the Shootout for much of the session, Whincup (#888 Triple Eight ZB Commodore) was outside the top 10 for long periods of time until he leapt from 16th to seventh after the chequered flag.

Waters’ #6 Monster Energy Mustang reportedly suffered a crank angle sensor or sync sensor problem which kept it in the garage without a lap time for almost the first half-hour.

He too was set to miss the Shootout until he jumped from 19th to eighth, knocking Richie Stanaway (#33 Boost Mobile ZB Commodore) out of the top 10.

Mark Winterbottom was also near the foot of the timing screen for an extended period of time but moved the #18 Irwin Tools ZB Commodore from 15th to ninth even later than Waters had secured his berth in tomorrow afternoon’s high-profile session.

Anton De Pasquale (#99 ZB Commodore) survived to be Erebus Motorsport’s sole representative in the Shootout, while Rick Kelly (#15 Castrol Altima) was first on the outside due to Winterbottom’s efforts.

Stanaway ended up 12th, ahead of Andre Heimgartner (#7 Plus Fitness Altima), while Coulthard missed the top 10 by 0.4695s.

Lee Holdsworth (#5 The Bottle-O Mustang) was the lowest of the Fords in 20th, while wildcards Brodie Kostecki (#56 Kostecki Brothers ZB Commodore) and Alexander Rossi (#27 NAPA ZB Commodore) were 24th and 25th respectively.

The next session is the half-hour Practice 6, tomorrow from 0940 local time/AEDT.

The starting grid for the 2019 Supercheap Auto Bathurst 1000 will be finalised with the Armor All Top 10 Shootout from 1705.

Results: Armor All Qualifying for Race 25