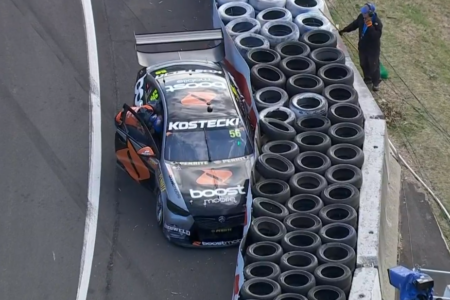 Kostecki Brothers Racing has been fined $5000 and docked 50 teams’ championship points for the error which led to Jake Kostecki’s crash at the start of Practice 4 at Bathurst.

Car #56 became stuck in the tyre at Griffins Bend on Kostecki’s out lap having not turned for the sweeping right-hander.

Upon his return to the Boost Mobile KBR garage, Jake Kostecki reported that a rack stop which had been left in the car was believed to be the cause of the incident.

That has now been confirmed, with officials establishing a breach of the ‘Safety’ rule of the operations manual.

The bulk of the fine has been suspended, but the team is currently on negative championship points given it has entered the Supercheap Auto Bathurst 1000 as a wildcard.

“Following the Session the DRD conducted an investigation into a suspected breach of Rule A4.4 by Kostecki Bros Racing after Car #56 collided with the wall at Turn 2 on its out Lap at the commencement of the Session,” read the stewards report.

“A report from Supercars Technical confirmed that Car #56 had been released from its Pit bay with a rack stop left in on the steering rack as a result of which the Driver of Car #56 was unable to turn the Car to the right.

“After an admission to the breach, the Stewards imposed a Penalty on Kostecki Bros Racing of a Fine in the sum of $5,000, of which $3,500 is suspended until 31 December 2019 on condition that Kostecki Bros Racing commits no further breach of Rule A4.4 prior to that date, and the loss of fifty (50) Team Championship Points.”

Rule A4.4 contains one sub-rule, which states, “Each Competitor is responsible for all safety aspects of the Team including; that Competitor’s Car or Cars, Team members, equipment, Pit Garage and visitors to its Pit Garage at all times.”

The Boost Mobile KBR entry, which is driven by cousins Brodie and Jake, had to be repaired after the latter crashed at Sulman Park during Practice 2, leading to a need to wheel-align the car and thus fix rack stops.

Brodie Kostecki was 24th in this afternoon’s wet Armor All Qualifying session, ahead of Walkinshaw Andretti United’s wildcard for IndyCar drivers Alexander Rossi and James Hinchcliffe, and the Tekno Autosports car.