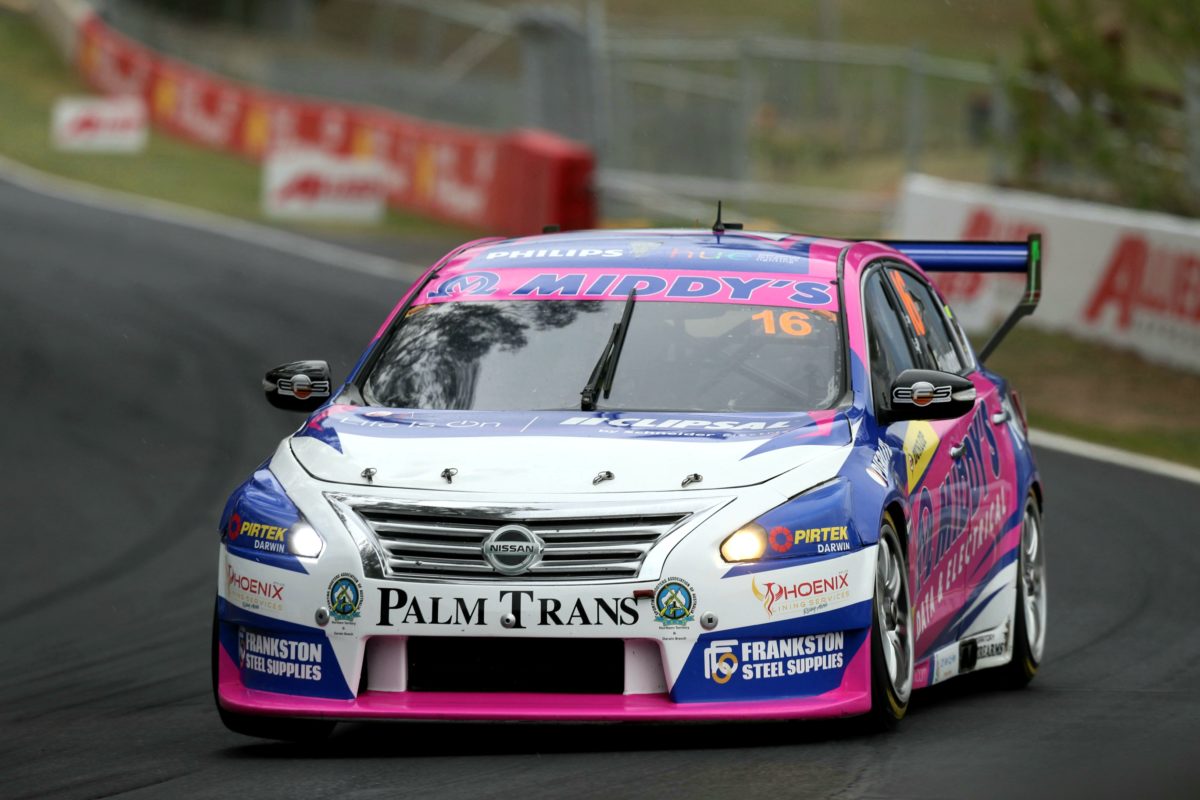 Bryce Fullwood has qualified on Armor All Pole Position for the Dunlop Super2 Series’ mini-enduro at Bathurst with a highly impressive effort in the rain.

The series leader, who set the pace in both of the weekend’s practice hit-outs, finished the half-hour qualifying session with half a second on the rest of the field.

Fullwood is set to be joined on the front row by MW Motorsport team-mate Tyler Everingham, a personal best qualifying result for the Super2 rookie.

The third of the MWM Altimas is set to start only ninth after Zane Goddard, who is a relatively distant second to Fullwood in the standings, spun and made contact with the wall at McPhillamy Park.

The half-hour session began with light rain at Mount Panorama but the field still on slicks, and Fullwood wasted no time in setting a 2:07.0480s in the #16 Altima.

That time had him 1.4854s clear of the field after the first flying laps, with Ash Walsh next best in the #35 Matt Stone Racing VF Commodore.

Fullwood went fastest to the second sector next time around but found no overall improvement by the time he reached the control line.

However, no one else could get any closer until Everingham clocked a 2:07.5718s on his third flyer in the #27 Altima.

With the rain continuing, and conditions perhaps even getting worse, the track was empty for almost the final 10 minutes of qualifying, cementing a maiden Super2 pole for Fullwood.

“I’ve had an extremely fast car here this weekend and it’s a little bit of a shame that I couldn’t really wind her up and see what she was made of – we didn’t quite have the best P2 run with our new tyres, we had some dramas – but no matter the circumstances, still really happy with that.”

Walsh and Will Brown (#38 Eggleston Motorsport VF Commodore) will share the second row after the latter recovered from an early spin when he straddled the exit kerb at Hell Corner.

David Russell (#33 Matt Stone Racing VF Commodore) qualified fifth and is due to start alongside Thomas Randle, whose #5 Tickford FGX Falcon was repaired just in time after a crash at The Dipper in Practice 2.

Triple Eight team-mates Brenton Grove (#10 VF Commodore) and Kurt Kostecki (#55 VF Commodore) will lock out Row 4 after each nearly found the wall when they ventured out for another run in the tricky conditions.

Goddard did find concrete at the top of Mount Panorama when he stepped over the edge of the track and spun at McPhillamy Park, whacking both right-hand corners of the #28 Altima on the wall.

As such, he was shuffled back to ninth, while Dylan O’Keeffe (#44 Garry Rogers Motorsport VF Commodore) rounded out the top 10.