Cameron Crick netted pole position in a red flag interrupted Armor All Qualifying for Round 6 of the ECB SuperUtes Series at the Supercheap Auto Bathurst 1000.

Crick (Mitsubishi Triton) laid down the fastest time in the second half of the 20-minute session before a red flag cut proceedings short.

Patches of light rain hovered around the track in the early stages of qualifying, but Barbour headed the field after the first runs on a 2:43.375s.

Tom Alexander was set to improve on his third flying lap but pulled into pit lane with what appeared to be fluid coming from the front of the Ross Stone Racing Isuzu D-Max.

Nathan Pretty (Holden Colorado) jumped to second before Barbour lowered the benchmark to a 2:41.648s.

Barbour’s time didn’t stand for long, with Crick shooting to the top a few seconds later to ultimately take pole. 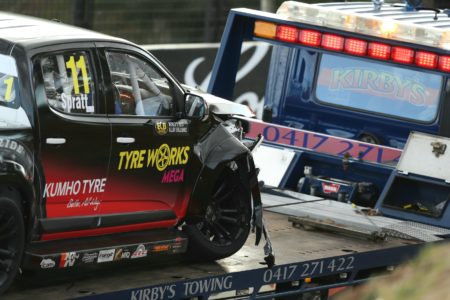 The red flag flew with five minutes left on the clock after Matt Spratt found the fence at the top of the Mountain.

Spratt lost his Holden Colorado on the exit kerb at McPhillamy Park, firing him into the right-hand concrete wall, with the car coming to a stop at Skyline.

Moments later, Christopher Formosa had his own incident at The Dipper, swiping the concrete wall in his Ford Ranger.

Ryal Harris (Mazda BT-50) had set faster first and second sectors on his lap but sprayed it across the grass at The Chase before the red flag was thrown.

Harris qualified sixth, while title rival Alexander washed up ninth after visiting the pit lane several times during the session.

Race 1 for the SuperUtes takes place at 1655 local time/AEDT.