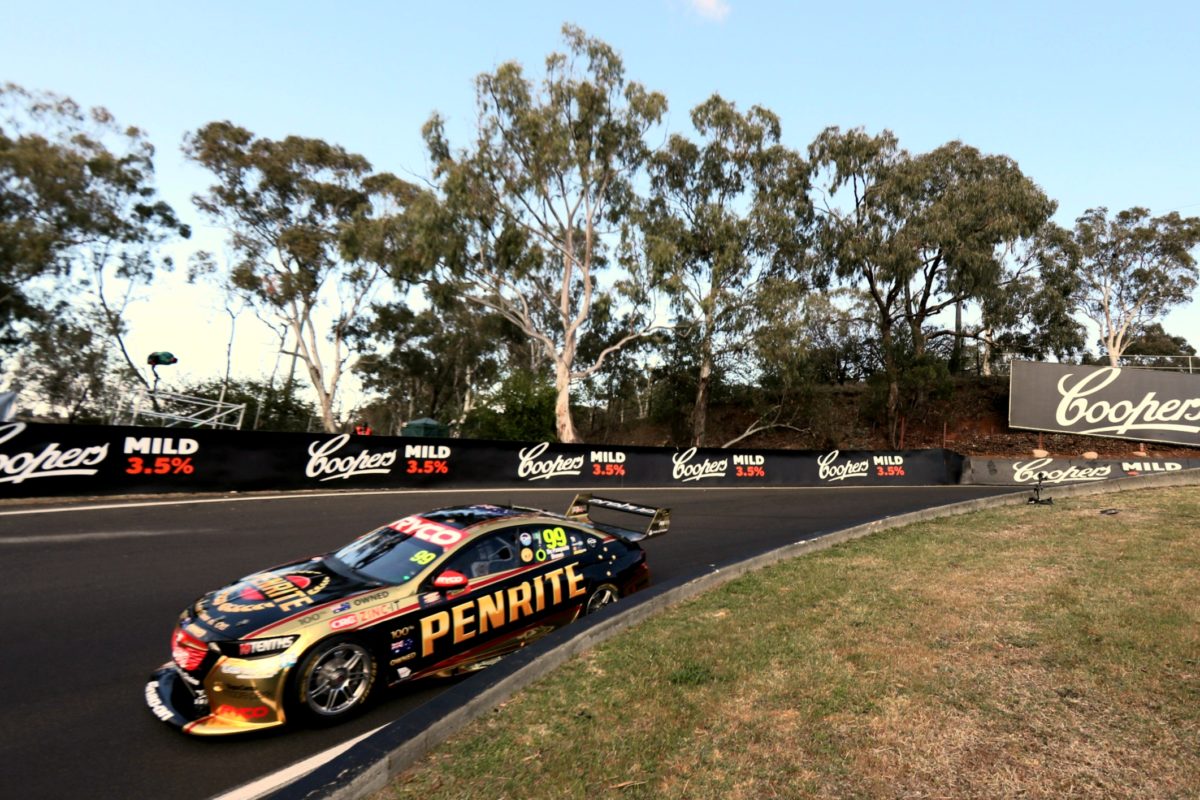 Will Brown has finished narrowly ahead of Michael Caruso with the only ‘four’ of the fourth practice session, for co-drivers, at the Supercheap Auto Bathurst 1000.

Brown set a 2:04.9817s on his final run in Anton De Pasquale’s #99 Penrite ZB Commodore before Caruso improved to a 2:05.0212s in Cameron Waters’ #6 Monster Energy Mustang with the chequered flag out.

Garth Tander was two tenths off the pace in third position in Shane van Gisbergen’s #97 Red Bull HRT ZB Commodore and Bryce Fullwood was the best of the Nissan drivers in sixth position in the #7 Plus Fitness Altima.

There was early drama for one of the wildcard entries, however, when Jake Kostecki crashed on his out lap and brought about a red flag before anyone had a chance to start a timed lap.

The #56 Kostecki Brothers Racing ZB Commodore, which sat out Practice 3 the afternoon prior after a crash at Sulman Park, ran straight on into the tyre wall at Griffins Bend.

Once back at his garage, Jake Kostecki said it was believed that a crew member left a steering rack stop in the car.

“I think one of the guys accidentally left the rack stop in,” he explained.

“Mistakes happen, I made a mistake yesterday myself. We’ll get it fixed up and be out there as soon as we can.”

When the session seriously got underway, the Triple Eight Race Engineering co-drivers were on the pace.

Having been shuffled well down the order, Tander jumped back to the top of the timing screen with a 2:05.4448s on his second run, shortly before D’Alberto closed to 0.0048s behind while still having not pitted since the restart.

That time of Tander’s stood as the best for almost half an hour, until Fullwood found a 2:05.4419s on his third proper run in Andre Heimgartner’s Altima.

In the meantime, Thomas Randle had locked up and understeered into the barriers at Forrest’s Elbow in Lee Holdsworth’s #5 The Bottle-O Mustang.

However, he was wheeled back out and moved from outside the top 10 to fourth, then usurped Fullwood next time around with a 2:05.5886s with just over 10 minutes of the 60-minute session remaining.

At that point, less than a tenth of a second covered the top five, before Brown set what would be the fastest lap of the session.

He very nearly bettered it two laps later, going fastest to the second sector and ultimately checking in at 2:05.0469s at the control line.

Randle, too, was a threat of going back to the top, setting the fastest first sector but straightlining The Esses in the final minute of the session.

Brown said post-session, “The car was awesome, makes it pretty easy when you’ve got a car that good.

“I jumped in and Anton set it up great and can’t thank the boys enough.

“(I was) Just wheeling it over the top, they don’t tell me anything until I get in here so it was great to see we are P1.”

In the end, it was Caruso second despite Car #6 stopping in pit lane with an electrical problem midway through the session, Tander third with a 2:05.1821s, D’Alberto fourth at 2:05.2539s, and Randle fifth with the lap which had him briefly fastest.

Luke Youlden entered the circuit for the first time with around 20 minutes of running elapsed after Erebus Motorsport rebuilt the #9 ZB Commodore overnight.

Aside from having to pit so that the crew could attend to an inoperable tail light, he appeared to have a trouble-free run on his was to 12th at 0.9001s off the pace.

Lowndes ended up 14th at 0.9401s off the pace, one position ahead of James Moffat (#55 Supercheap Auto Mustang).

Practice 5, which is open to all drivers, runs for an hour this morning from 1105 local time/AEDT.