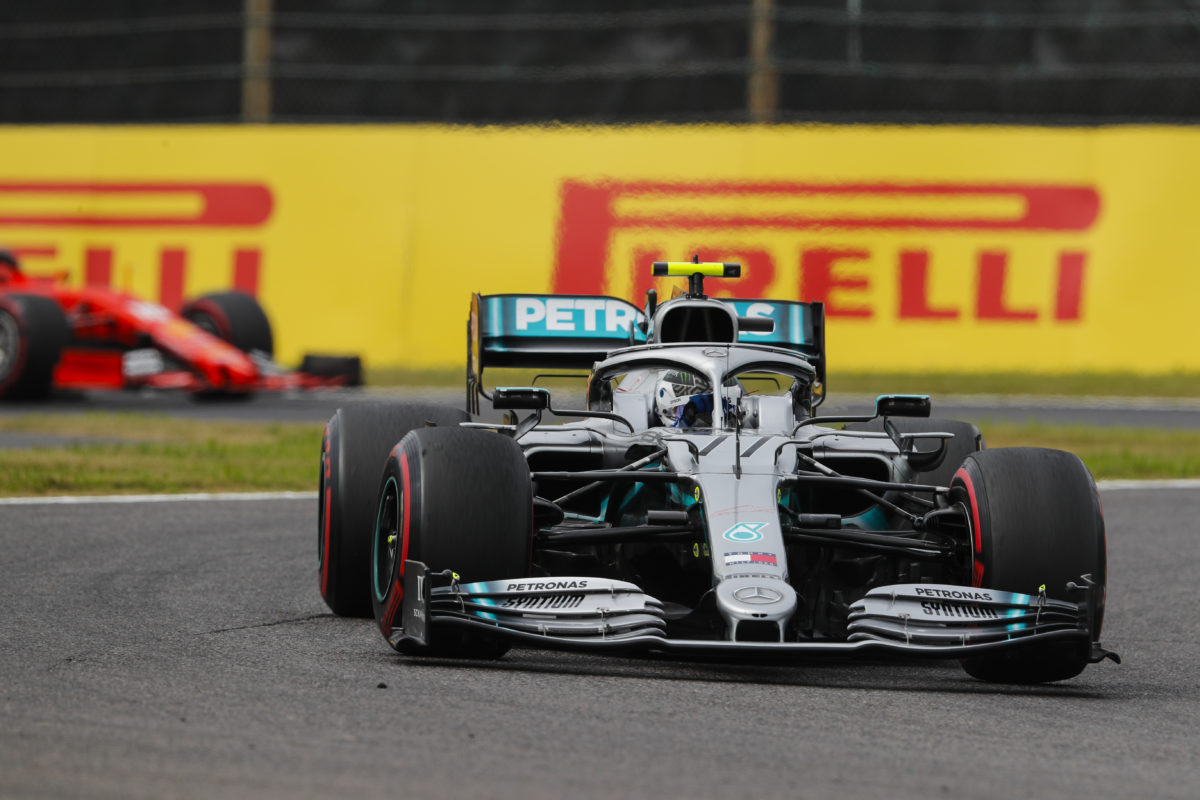 Valtteri Bottas led a Mercedes one-two ahead of team-mate Lewis Hamilton in Friday practice at the Formula 1 Japanese Grand Prix.

Bottas provided one of the few off-track moments in the day after he spun his W10 going onto the main straight, 30 minutes into FP2.

However, the five-time grand prix winner was able to recover and later set his best time on Pirelli’s soft rubber.

Hamilton finished 0.1s adrift from his team-mate, with the winner of the recent Russian Grand Prix underscoring Mercedes’ early advantage.

With news Saturday’s track time had been cancelled, leaving FP3 scrapped and qualifying postponed until Sunday, an extra emphasis was placed on Friday’s running.

Adding further intrigue, stewards declared the results of FP2 would be used to form the grid for Sunday’s race if qualifying cannot proceed on Sunday.

Despite that, the focus of Friday’s running continued to be long runs.

Sainz’s MCL34 came to a halt seconds into the session due to an electrical drama, causing a Virtual Safety Car. The Spaniard was later able to recover track time with the issue resolved by the Renault-powered outfit.

Racing Point’s Sergio Perez was eighth in both sessions, with the Mexican driver strong in the final sector of the lap.

After sitting out FP1 as Naoki Yamamoto drove his car, Pierre Gasly notched up 34 laps in his sole practice session with the ninth best time.

Daniel Ricciardo set a 1:29.859s early in the session on mediums – but failed to improve upon his time that left him 17th on the timesheets.

The Australian and Renault team-mate Nico Hulkenberg both struggled with outright pace.

Earlier, Bottas led a Mercedes-Benz one-two ahead of teammate Hamilton in FP1.

The Mercedes duo set an ominous pace in the session, with third place Vettel 0.989s seconds off Bottas’s best. Leclerc ended the session fourth, 1.181s from the pace.

Afla Romeo’s Antonio Giovanazzi’s preparation was the first to be hampered by the changed schedule, with the C38 stopping with hydraulic problems after four laps.

Yamamoto, the reigning Super GT and Super Formula champion, made an impressive Formula 1 debut for Toro Rosso in FP1.