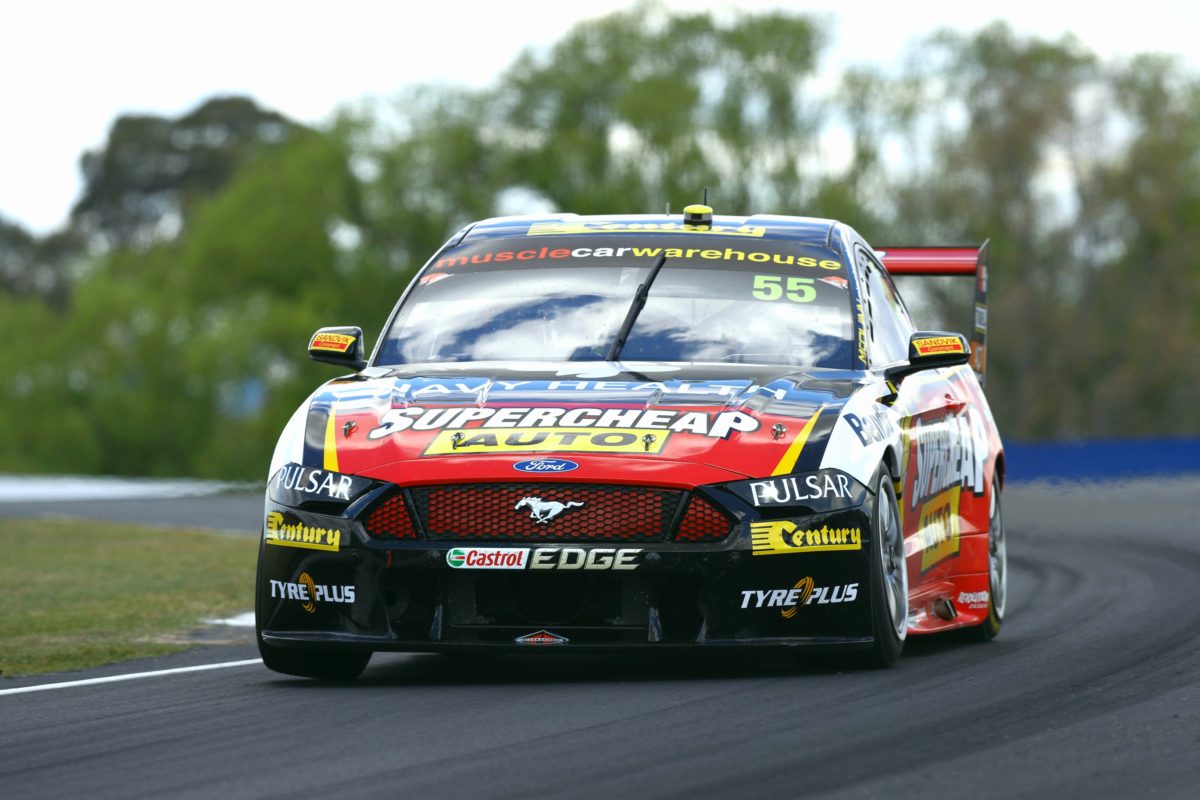 James Moffat has prevailed in a hotly contested first co-driver session at the Supercheap Auto Bathurst 1000 as past race winner Luke Youlden clouted the wall.

Moffat set a fastest lap of 2:05.6619s with the chequered flag out on the hour-long second practice session of the weekend in Chaz Mostert’s #55 Supercheap Auto Mustang.

That put him just ahead of Shell V-Power Racing Team pair Alexandre Premat and Tony D’Alberto, while Garth Tander was also within one tenth of a second of the best pace as he finished fourth in Shane van Gisbergen’s #97 Red Bull HRT ZB Commodore. Youlden went into the wall hard at Sulman Park just as the 20th minute of the session elapsed, causing significant damage to the right-front corner of David Reynolds’ #9 Penrite ZB Commodore and drawing a red flag.

“Just lots of understeer into the Grate and just didn’t make it out obviously; just wouldn’t turn for me,” said Youlden from the Mount Panorama medical centre.

“We were battling with it a lot and we made a change to try and combat it obviously I went in too deep obviously just messed up.

“Very disappointed in myself, obviously I regard myself as a fairly safe pair of hands.

“I mean, the pace is hot and we’ll try do our best to obviously push the team forward. We believe we’ve got a pretty quick car.

“I was expecting a bit more grip to be honest and it just sort of let it down a bit.”

The former, who is co-driving for Fabian Coulthard, set the then-fastest first sector early in his second run, but did not improve on his lap time as a whole having run onto the grass exiting Murray’s Corner.

Tander then took over top spot with a 2:06.6812s just before Youlden found the wall at the top of the mountain.

D’Alberto put in a 2:06.6675s shortly after the restart, having not long been fastest to the first sector again but without a chance to complete his lap due to the red flag caused by Youlden.

Tander slashed the benchmark to a 2:06.1024s not long before half an hour of running had been brought up, before Moffat and then Will Brown (#99 Erebus ZB Commodore) moved into second position.

Those three and D’Alberto had been in a contest amongst themselves to that point but Premat (#17 Mustang), Scott McLaughlin’s co-driver, began to play himself into matters in the second half of the session.

Premat had just gone to fifth position and was personal best to the second sector when another red flag came with 25 minutes to go.

Ash Walsh had caused the interruption by locking the rears and beaching Tim Slade’s #14 Freightliner ZB Commodore at Murray’s Corner, which led to a net loss of around five minutes of track time as it ate up what little was left of the extra 10 minutes after Youlden’s prang.

It appeared that Premat would therefore earn early bragging rights among the co-drivers until Moffat went quicker with the chequered flag out.

“We obviously had our plan, like pretty much everyone else up and down pit lane would have, and we were able to get to it and we stuck to it,” said Moffat.

“So that was nice, and then to be quick at the end, seemed like we were reasonably competitive most of the session. (We were) pretty much race trim so that’s encouraging for Sunday.”

Brown ended up fifth at 0.4387s off Moffat’s pace, from the first Nissan driver in Bryce Fullwood (#7 Plus Fitness Altima).

Michael Caruso (#6 Monster Energy Mustang), the last driver within half a second of the fastest lap, was seventh, and Craig Lowndes eighth in Jamie Whincup’s renumbered #888 Triple Eight ZB Commodore.

Jake Kostecki also hit the wall at Sulman Park, late in the piece, in almost exactly the same spot as Youlden had done, but appeared to suffer a lesser impact and parked the #56 Kostecki Brothers ZB Commodore on the inside of The Esses.

He was 22nd fastest while Jack Smith was slowest of the 25 who went out having put Matt Stone Racing’s #35 SP Tools ZB Commodore into the tyre wall at Griffins Bend in the final quarter-hour.

Dean Canto did not start the session after Macauley Jones crashed the #21 CoolDrive ZB Commodore in Practice 1.