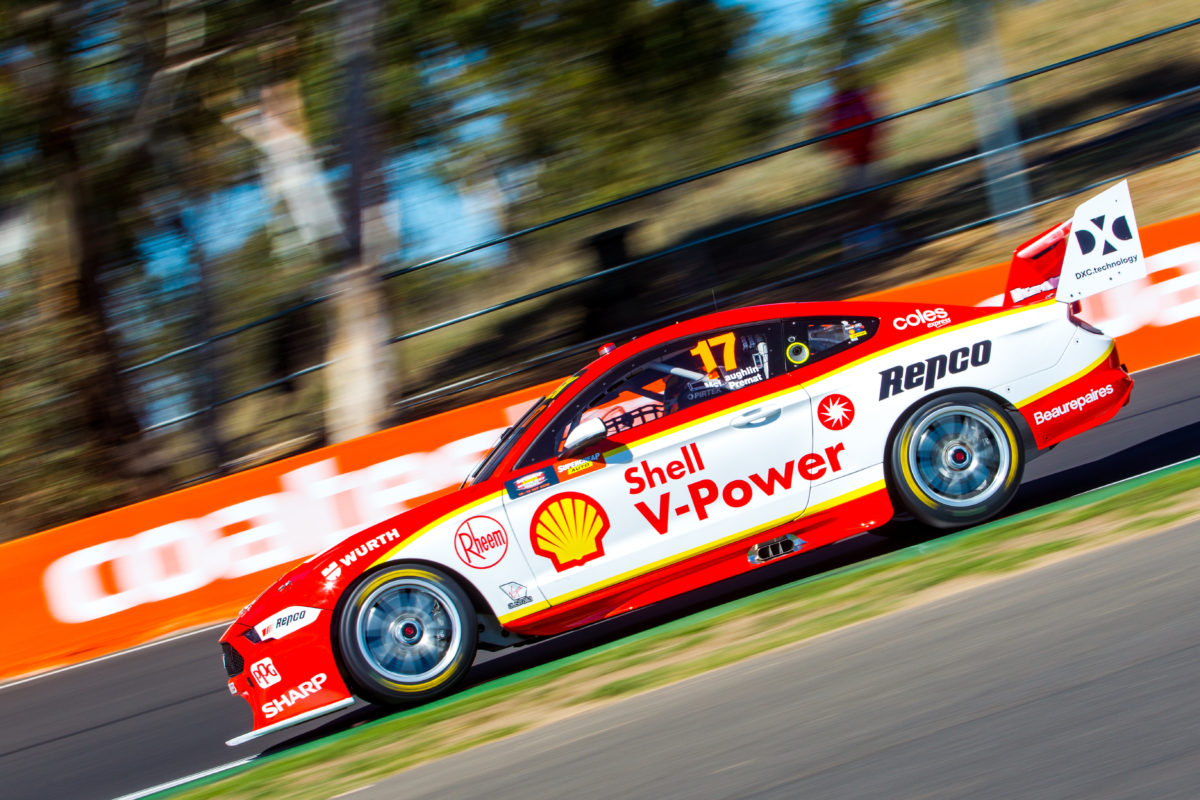 Scott McLaughlin says that he is “not fussed” about breaking the Supercars practice/qualifying lap record at Mount Panorama given he did so on a Thursday.

There was much celebration at the time the previous record was set, in the Armor All Top 10 Shootout on the eve of the Great Race itself, when McLaughlin went at least four tenths faster than anyone else.

That also remained the only ‘three’ in a Supercar around Mount Panorama until today, with Jamie Whincup, Cameron Waters, and Will Davison also lapping under 2:04s during Practice 3.

McLaughlin also set his time with new tyres only on the right-hand side of the #17 Mustang.

As such, he believes his effort on the opening day of the 2019 event will be beaten if forecast rain stays away.

“It’s weird because it’s Thursday, and like the euphoria is completely different to when I first set the three,” said McLaughlin.

“Look it’s a proud moment. To roll the car out, we had a good car basically from the start, so good to just not change it too much, just thinker with it and get it to a point.

“I’m sure it’s (the pace) going to be faster if it stays dry, so I’m not really fussed at the moment.

“That’s certainly saying something,” Story remarked to Speedcafe.com about the lap.

“But from the moment we saw cars hit the track today they’ve been fast, and we saw three (other) guys in the threes there; a lot of guys, everyone in the top 10 in the fours. Extraordinary pace.

“I think we’re on for a hell of a weekend up and down this pit lane.”

McLaughlin’s comments, and the lap itself, square with his pre-event prediction that the 2017 practice/qualifying lap record would be beaten prior to Armor All Qualifying, weather permitting.

The fastest lap of the 2018 Supercheap Auto Bathurst 1000 was David Reynolds’ 2:04.0589s in the Top 10 Shootout, at an event which saw rain through Thursday and much of Friday.

Whincup topped Practice 1 earlier today with a 2:04.6744s in the #888 Red Bull HRT ZB Commodore, which bettered every session until qualifying from last year.

However, there is a 70 percent chance of rain tomorrow in Bathurst, “most likely in the afternoon and evening” according to the Bureau of Meteorology, and possible showers forecast for Saturday when the Top 10 Shootout will take place.

Practice 4, for co-drivers only, is scheduled for tomorrow morning at 0825 local time/AEDT.