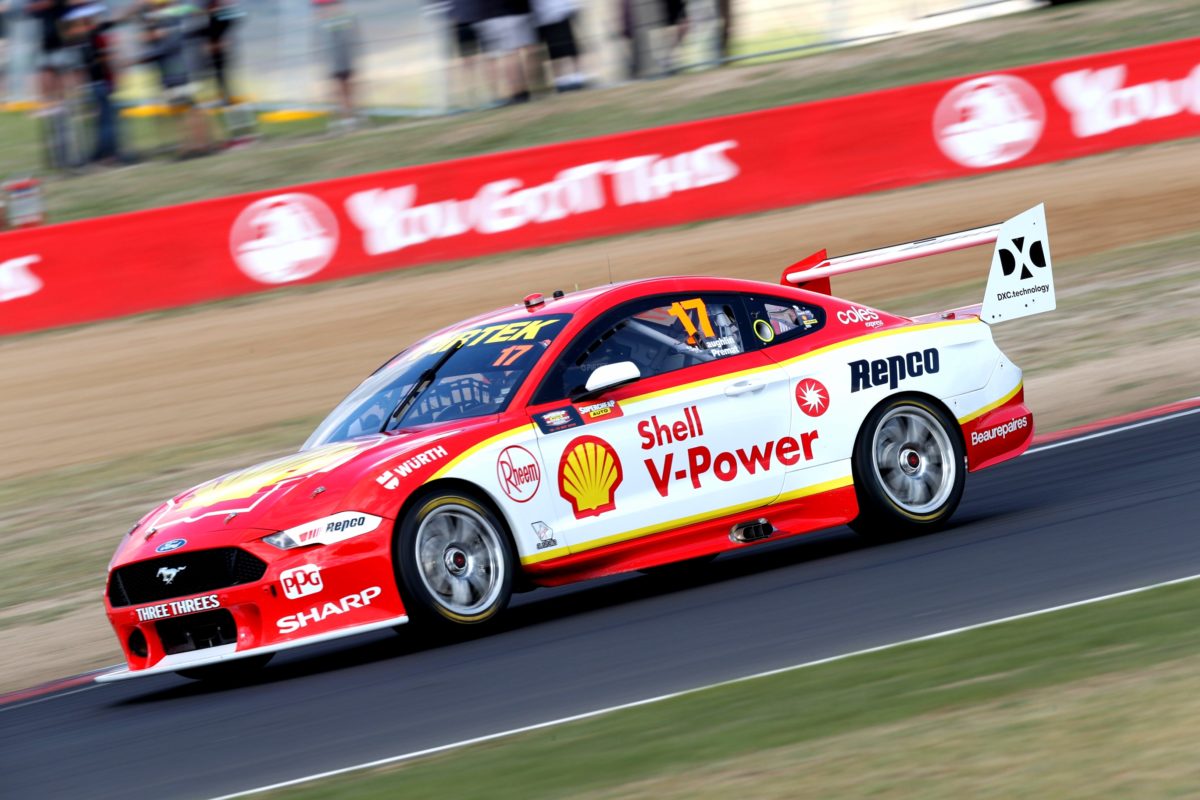 Scott McLaughlin has broken the Supercars practice/qualifying lap record in the final session of Day 1 of the 2019 Supercheap Auto Bathurst 1000 weekend.

McLaughlin set the pace in Practice 3 with a 2:03.7728s in the #17 Shell V-Power Mustang, while three more also got into the threes.

Jamie Whincup was next-best with a 2:03.9327s in the #888 Red Bull HRT ZB Commodore, with the next five spots occupied by the other five Ford Mustangs in the field.

McLaughlin was immediately into the fives with a 2:05.6484s on his first flyer, barely more than three tenths away from the fastest he had been in Practice 1 earlier in the day.

The Virgin Australia Supercars Championship leader rolled out a 2:05.3329s next time around, which was 0.0009s slower than his best in the morning session, and that stood as the best until a slightly off-sequence Davison clocked a 2:04.9040s on his first proper run, just past the 10-minute mark.

Anton De Pasquale (#99 Penrite ZB Commodore) soon closed to 0.0132s behind, making him the fourth driver of the day to get into the fours, before McLaughlin joined them in setting a 2:04.8690s on his second run.

Shane van Gisbergen beat team-mate Whincup’s Practice 1 pace-setter when he took the #97 ZB Commodore to a 2:04.6223s in the 26th minute.

However, McLaughlin went faster again on his third run when he rolled out a 2:04.2835s despite kicking up the dirt as he exited Hell Corner.

Lee Holdsworth (#5 The Bottle-O Mustang) closed to 0.1563s behind on his fourth run with just over a quarter of the hour remaining, and he remained the closest until the pace stepped up again in the final 10 minutes.

McLaughlin’s fastest lap was achieved with new tyres only down the righthand side, and he also appeared to make the lightest of touches with the wall at Sulman Park on his way across the top.

Mostert got to 0.2894s off the Kiwi’s pace, which had him as high as second in the last few minutes, before being bumped back by Whincup and then Davison.

Despite a quartet reaching the threes, only McLaughlin bettered the time he qualified on Armor All Pole Position with in 2017.

“We’ll just keep a lid on it but the car feels good,” said McLaughlin.

“We rolled out pretty nice. Geez, you’re hanging on over the top now, it’s unbelievable the grip of the cars and everyone’s having a full dip. She’s good fun, but we’ll see how we go tomorrow.”

When asked if he had more time in him, McLaughlin responded, “The second-last corner, I dropped a wheel off there and that was a moment-and-a-half because I kept my foot into it; I’m an idiot, I’ve got to remember it’s Thursday.

“I’ll tune myself up overnight, but there’s a little bit (of additional pace) here and there.”

“(The fastest lap this weekend is) going to be a low-three I reckon. If it’s dry and the conditions are right, it will be a low-three. God damn, if someone does a two I hope I’m doing it.”

Holdsworth reset the fastest first sector on multiple occasions but still ended up sixth on a 2:04.0673s, ahead of Fabian Coulthard (#12 Mustang) in the second of the DJR Team Penske entries.

The session, which was held under somewhat cloudy skies, ran uninterrupted despite a handful of offs.

Dean Canto was given the early running in the #21 CoolDrive ZB Commodore which Macauley Jones crashed in Practice 1, with that pairing finishing Practice 3 in 22nd.

The next hour of practice, set aside for co-drivers, will be held tomorrow from 0825 local time/AEDT.