Brad Jones Racing is rushing a replacement roof to the Supercheap Auto Bathurst 1000 from its Albury base following Macauley Jones’ Practice 1 crash.

Jones lost the back end during the opening practice session at Mount Panorama, backing the Team CoolDrive car into the wall at The Cutting.

The impact left the car with panel damage to the right rear quarter, including chassis rails. 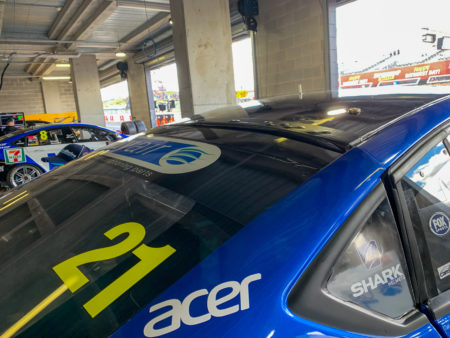 The repaired roof on the BJR Commodore

However, much of the impact was transferred to the roof which became dislodged and folded back on itself following the incident.

Without a replacement roof among its spares at the circuit, the team has patched up the damaged one in the interim, but is set to fly up a replacement tonight.

“We’ve got a roof coming to Sydney, then we’ll bring it up here tonight and then work out what we’re going to do,” team boss Brad Jones told Speedcafe.com.

“Other than that, we had everything here.

“The team have done an amazing job to get the car back in ship shape and ready for P3.”

While the replacement roof it set to arrive this evening, there are no guarantees the team will actually fit it.

“It’s a big job to put a roof in the car,” Jones admitted.

“I think we probably will, but we’ll just… (it) depends what else we’ve got going on to be honest.”

Jones set the 24th fastest time in the opening session, recording just seven timed laps prior to the contact.

Practice continues at Bathurst with a third 60 minute session scheduled for 1600 local time/AEDT this afternoon.