Brad Jones Racing is hopeful the Team Cooldrive entry will return to the track later today after Macauley Jones suffered a crash in opening practice at the Supercheap Auto Bathurst 1000.

Jones lost the rear of the #21 Holden Commodore on the entry to The Cutting, resulting in the car backing into the wall and causing damage to the rear. 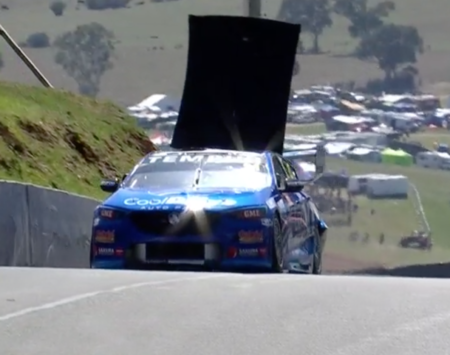 The impact also loosened he roof panel which was seen flapping as the car came to halt at the top of Reid Park.

Team owner Brad Jones has confirmed that the rear chassis rail has been damaged but is optimistic that repairs can be completed today.

The biggest concern at the moment is securing a replacement roof panel.

“No, it’s not great way to start the day. It’s repairable and I’m hoping we’ll get it back out today,” Brad Jones told Speedcafe.com.

“We’re just pulling it apart now, so it’s a bit hard to tell. It’s damaged the rear rail, but you know, we need to see how we go.

“We’ve got most of the bits and pieces here for it, the roof is the only concern. We’re working on that at the moment.”

Macauley Jones, who is sharing the car with Dean Canto, believes the damage looks worse than it is in reality.

“The track is very loose at the moment. We just made a change, went back out and it definitely didn’t help it.

“It didn’t feel like it went in that hard, just slowly lost the rear and then tapped it,” he added of the impact.

“It looks a lot worse than what I think it is, there’s no suspension damage, just panel work really and for some reason the roof took a lot of it.”

Supercars Practice 2 for co-drivers only is scheduled for 1245 local time/AEDT.