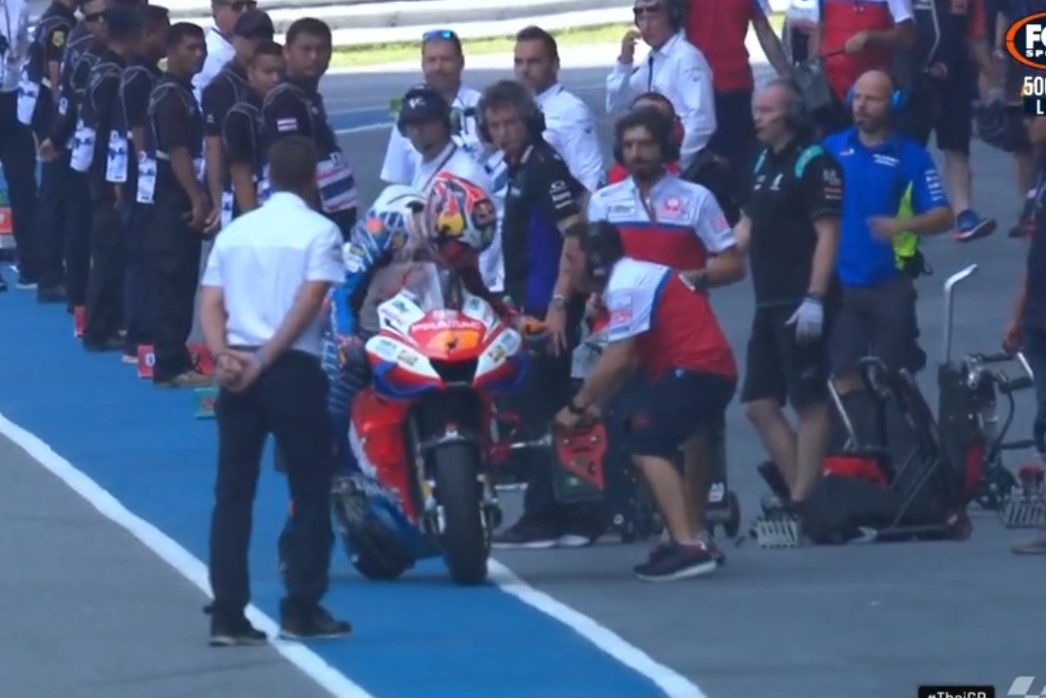 Jack Miller has explained how accidentally hitting the kill switch on his Ducati cruelled him before the Thai MotoGP had even started.

Miller qualified on the second row at Buriram and considered himself a good chance of a podium given his long run pace in Free Practice 4.

Those hopes evaporated in an instant when he had to push his Pramac Racing entry into pit lane with the rest of the field assembled in their grid boxes and red lights about to go out.

The Ducatis operate with a holeshot device but Miller had accidentally turned his bike off instead.

“I was in a bit of a hurry, just trying to do everything a little bit too quickly, let’s say, turning the launch on, and I pressed the wrong button,” said the Queenslander.

“I won’t be having that trouble on the grid again, that’s for sure. It’s just one of those things. With the adrenaline going and everything, I just pressed the wrong button.”

Miller therefore started from the lane and was more than eight seconds behind second-last at the end of the standing lap.

He inherited a position when Mika Kallio crashed out on Lap 4, passed Hafizh Syahrin three laps later, and ultimately finished 14th in a race in which there was only one other DNF.

“I was pissed (off), don’t get me wrong. I was disappointed in myself, but I just got over it straight away and tried to do everything correctly,” recalled Miller.

“Had the pit limiter on, everything like that and got back out of there as quick as possible and set to work on trying to catch back the boys.

“It was quite easy to slip off or make a mistake out there, so I was just trying to be as calm as I could. For example, with (Andrea) Iannone at the end, I sat behind him for a lap until I had the time and position to go round him.

“I didn’t make any real mistakes, I had one moment at the front where I went wide at the turn and went onto the green on the outside, but apart from that, I had a pretty solid day.

“Only one rider crashed out, and we were still able to get 14th, so it’s not too bad.”

Miller did feel, however, that the mistake cost him a chance of being the top Ducati rider, which ended up being Andrea Dovizioso in fourth.

“Definitely,” he said about the possibility of that achievement.

“I think if I look at our pace… the whole race I was going alone, no slipstreams on the first lap so I instantly had to go down to the, let’s say, fuel economy map because I was pushing the thing the whole way and there was not a slipstream to be seen.

“So I was riding on eco mode the whole way through and trying to make it work. But it is what it is. I’ve had a solid weekend in general, it’s just a shame that I made that small mistake on the grid.”

Miller remains eighth in the championship but has drifted to 24 points behind race runner-up Fabio Quartararo.